Summary
The penultimate issue of this series opens with a flashback where Midnighter’s ally Gregorio (a.k.a. Extrano) explains to Midnighter explaining that the binding spell that will allow him to fight Neron for only seven minutes.

Returning to the present, we see Midnighter and Apollo about to commence their fight over Apollo’s soul. Neron doesn’t seem too worried, even offering to let Midnighter have the first strike. Midnighter rejects the offer and activates the spell binding him to an angel, which gives him the angel’s power for seven minutes.

Neron states that he is not afraid of an angel’s power, and that angels have no power over him, and throws a punch at Midnighter. Midnighter, however, knows Neron is lying.

The fight is short, but brutal, with Midnighter overcoming Neron. But just as he has won, he collapses – his seven minutes are up.

Midnighter drags his broken body to the bottle containing Apollo’s soul and Apollo bursts from the bottle. The lovers are finally reunited – or are they? Immediately after Apollo assures Midnighter that they are going to escape Hell and that they will be okay, he vanishes.

Neron reveals that “Apollo” was an illusion, and the real Apollo was gone before Midnighter had gotten there. Apollo had actually won his bet with Neron, and Neron had set him free.

Neron explains that although both have won against him, he has deceived them so that their victories are meaningless. Apollo has been set free, but only from Neron’s imprisonment. He is still in Hell, left to wander its endless bounds for eternity. While Midnighter has beat Neron, only to find that Neron doesn’t have Apollo anymore.

The dying Midnighter utters a last bit of defiance to Neron, which Apollo manages to overhear through his communication with Neron. Realizing that Midnighter is the one needing to be rescued, Apollo turns back towards Neron’s castle to rescue his lover.

Positives
The revelation that Midnighter and Apollo’s victories were pointless was a brilliant move, and exactly what you would expect from a lord of Hell. When Neron was first introduced in the Underworld Unleashed event, he would grant wishes in exchange for the wisher’s soul, but each wish was granted in a way that made the wisher regret having made the bargain. Thus, it makes perfect sense that any contest against Neron will be set up so that even if you win, you still lose.

Although we see him briefly, it’s good to see Extrano being shown as a competent and powerful magician. As DC’s first openly gay hero, it’s good to see him being treated seriously, as opposed to his rather stereotypical depiction back in Millennium, and The New Guardians. 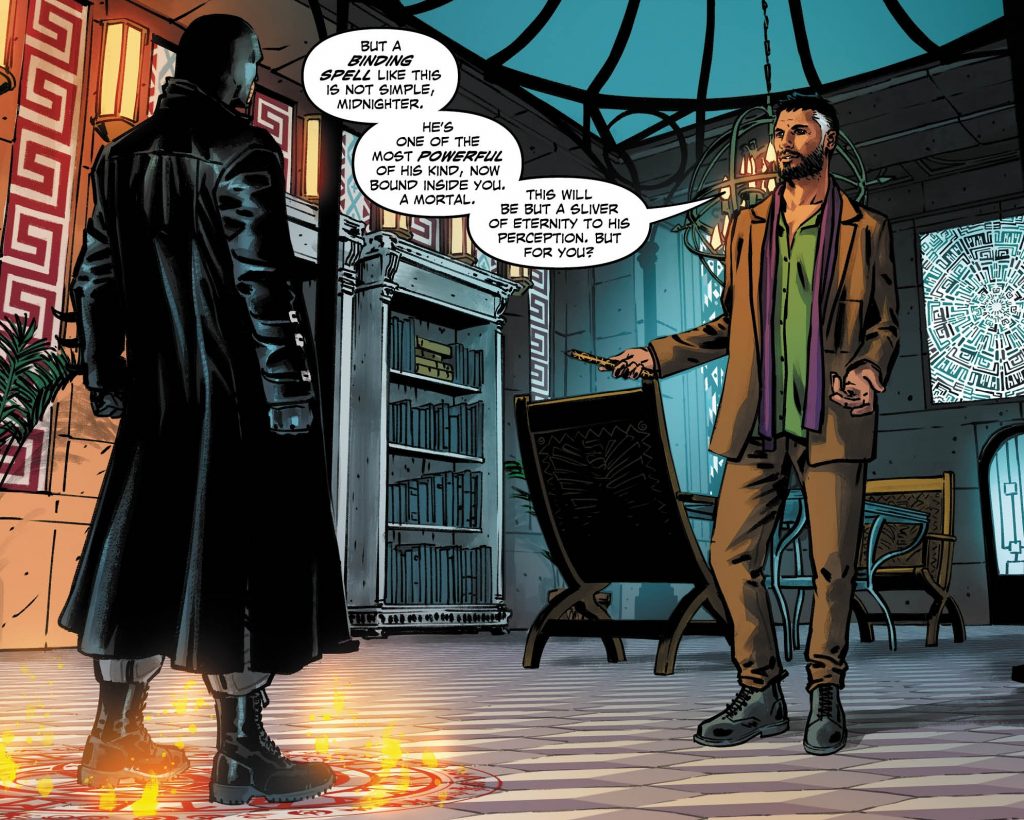 Negatives
The only complaint I have is that this is a mini-series, and not an ongoing. I am sure we will see more of Midnighter and Apollo before long, but The Wild Storm is apparently about to establish the Wildstorm characters in a separate universe. We do not yet know if it will be this version of the characters, which is set in the DC Universe.

Verdict
This issue, in which Midnighter apparently defeats Neron only to find out it was for naught, is the perfect setup for Apollo and Midnighter’s final showdown with the Prince of Lies. I will be eagerly awaiting the next issue to see that epic confrontation.