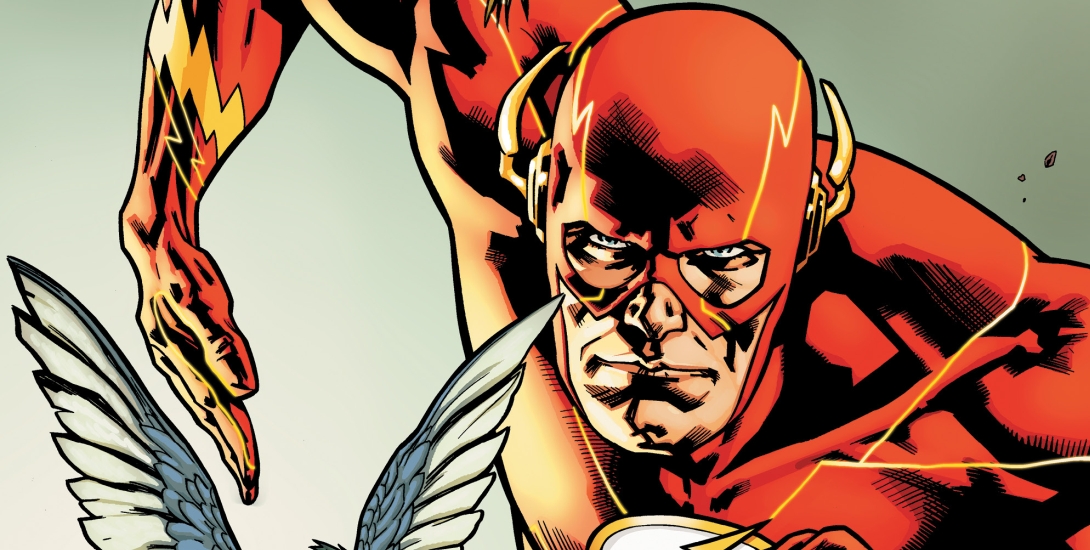 Summary
This issue opens with the Flash investigating a bank that Heat Wave had robbed and burnt down while the Flash had been absent from Central City last issue. The Flash had been lured away to Corto Maltese, where the Mirror Master had kept him occupied while the rest of the Rogues Gallery engaged in a crime spree.

Iris West arrives on the scene and her and the Flash discuss the Rogues crimes. Iris gives the Flash the idea to investigate what exactly the Rogues stole in their robberies.

The Flash finds that the Rogues’ crimes were bigger and bolder than ever before, leading him to the conclusion that they planned them to be their last in Central City.

The Flash then finds Heat Wave at the remains of his family home, which he had burnt down as a child. Barry realized that if he was leaving Central City forever, Heat Wave would not be able to resist saying goodbye.

Heat Wave and the Flash battle until finally Heat Wave manages to hit the Flash with a blast of fire that knocks him out.

Later, we see Captain Cold meeting up with the rest of the Rogues Gallery on a yacht, where he is surprised to hear that Heat Wave has taken out the Flash.

Cold is not too pleased to hear this, as the plan was that any of the Rogues to encounter the Flash were to allow themselves to be captured, giving the rest more time to get away. However, Captain Cold realizes that Flash is too fast to allow Heat Wave to hit him, so it must be ruse.

This is immediately proven true, as the Flash makes his presence known, revealing that he had faked his defeat, then followed Heat Wave to the rest of the Rogues.

The Flash easily takes all the Rogues out, save for Cold. Cold then tells the Flash that he broke into S.T.A.R. Labs and stole parts of the Black Hole group’s technology to build a new Black Ice Gun, which he turns on the Flash.

Positives
This issue shows the Flash dealing with a unique situation. The Flash usually shows up in time to deal with the Rogues while they are in the act of committing crimes. But for once, he has to track them down after the fact. However, he proves equal to the task, using logic and his long experience of dealing with these particular villains to find them.

Also, I like how this issue shows how quickly and easily Barry can take most of the Rogues down when he is angered and not in a mood to mess around with them. He takes the entire group out in a single two-page panel, except for Cold. This shows a bit of what the Flash is capable of when he lets loose.

Negatives
There’s no sign of Kid Flash this issue, which will disappoint his fans, but it is fitting that the Flash to have solo adventures in his own book. I’m sure Wally will keep playing a prominent role in the title.

Verdict
Seeing Barry in action against the Rogues hearkens back to the classic days of the silver and bronze age stories. Williamson’s take on the Flash gives me the same thrill I had when I would read The Flash as a kid in the 70s.