Summary
Continuing from last issue, the Flash faces Captain Cold and his new Black Ice Gun. This weapon is tied into the Speed Force, and disrupts Barry’s connection to it, making it impossible for Barry to vibrate through the ice it creates. 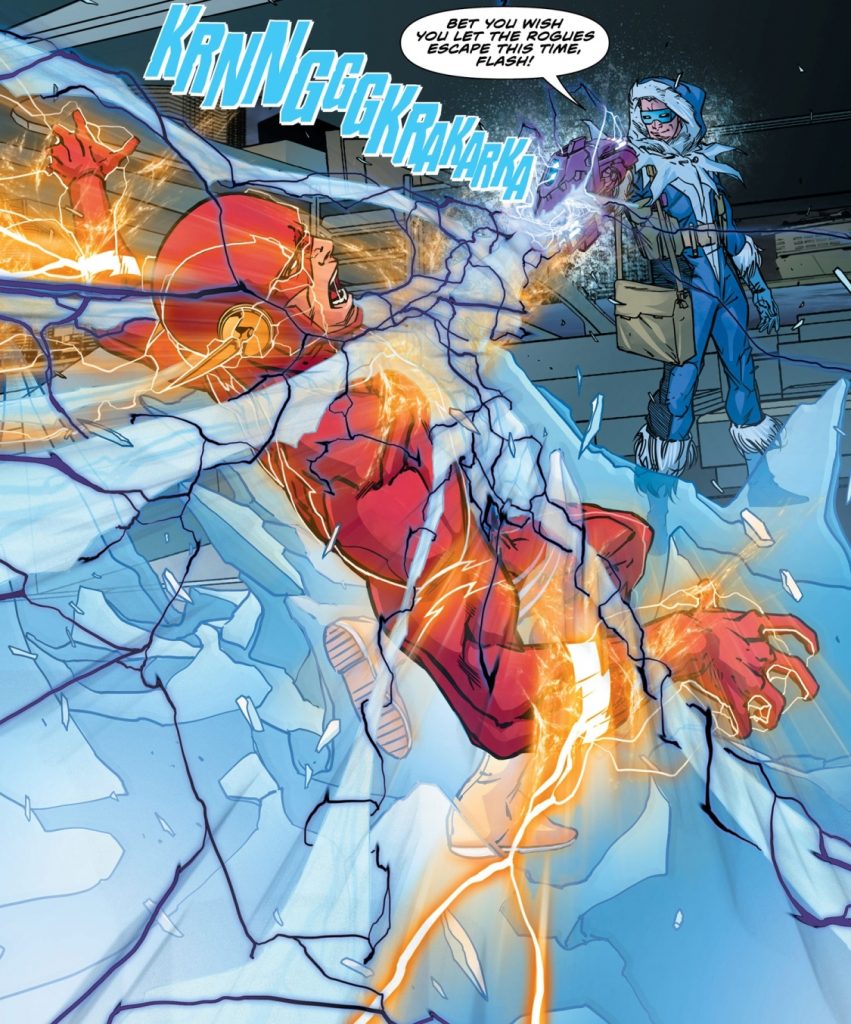 Trapped in the ice, Barry attempts to convince Cold that he could do better with his life than being a Rogue. He responds that he enjoys being a Rogue in the same way that Barry enjoys being the Flash, and claims that the only reason Barry is the Flash is for self-gratification.

Barry forcefully denies this while breaking out of the ice he’s trapped in. He knocks out Cold and is about to dismantle the Black Ice gun when he is interrupted by the rest of the Rogues, now recovered from the beatdown Barry gave them last issue.

While fighting them off, Barry takes the Rogues to task for their belief that they steal what they wanted, but that was okay, as they also protect Central City. Barry tells them to look around at the terrified bystanders and tells them, “The damage you cause to the city goes deeper than the stuff you steal! People hide from the Rogues. That’s not respect… that’s fear.” 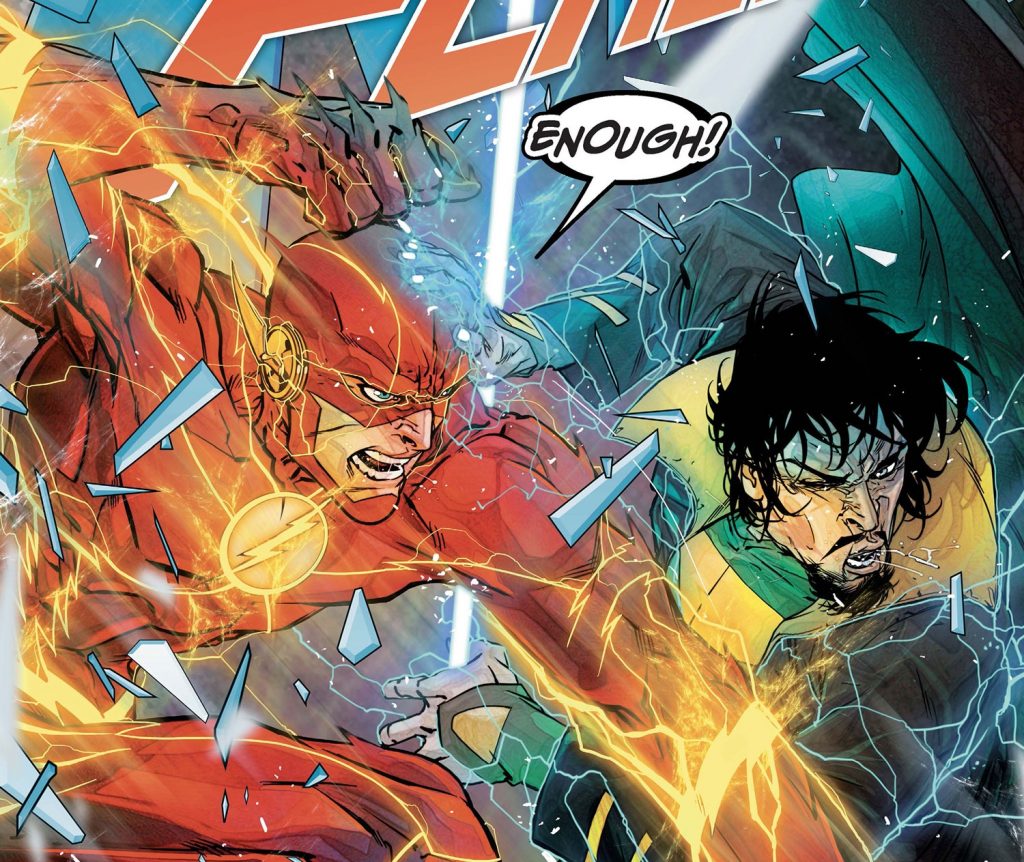 Cold responds that they should “get over it,” and that no one is owed anything – that is why the Rogues take what they like. To which Barry replies that it for this reason that no matter what they do or where they hide, he will find them and stop them.

This leads Golden Glider, who has incapacitated the Flash, to conclude that the Rogues need to stop the cycle by killing the Flash, having picked up the Black Ice gun. The other Rogues are reluctant to break their code against killing, but Cold implores his sister that if they kill the Flash, for her to let him to be the one to pull the trigger. She refuses, and pulls the trigger.

Luckily, when the Flash started dismantling the gun, he must have caused a short-circuit, which causes the gun to backfire, knocking the Rogues unconscious. Barry realizes that the blast would have indeed killed him if the gun had worked properly.

Afterwards, as Barry returns the Rogues’ stolen goods to their rightful owners, he ponders Captain Cold’s assertion that he is the Flash is to make himself happy, and concludes that yes it does make him happy to help people, but that he has no ulterior or selfish motive in doing so. But he feels for some reason that even though he beat the Rogues, he still feels that he lost.

Also, we see Kid Flash breaking into the Iron Heights warden’s office to get information about his father, the Reverse-Flash. He discovers that Reverse-Flash has been transferred to Belle Reve, the home base of the Suicide Squad.

Next, we see some prisoners in Iron Heights being led by guards to a different cell block. One of the prisoners, asks the guards if it’s true that the Rogues were captured by the Flash again. He then mockingly suggests that the Rogues should just give up and retire.

The guards leave them alone in the new cell block, where they are immediately beaten by unknown assailants. One of them addresses them, telling them that the Flash gave him some encouraging advice recently – that he could use his mind for more than just robbing banks. He states that he realized that the Flash was right, and from now on all crime in the city goes through him. We finally see that the speaker is none other than Captain Cold, the new crime boss of Central City.

Positives
This issue, we see a number of re-evaluations of motives and methods. Barry questions his motives for helping others, and concludes that although doing so makes him happy, that this doesn’t make his heroism ultimately self-serving. Golden Glider questions the Rogues’ code against killing, and decides to break this code. Fortunately, she fails to do so, but she has still crossed a line in making that decision.

Also, Captain Cold re-evaluates the methods of the Rogues and decides to move them from robberies to organized crime. It will be interesting to see exactly they implement this and what limits they will impose for themselves. Will they still refrain from killing, and will certain types of crime be off-limits under Cold’s control of Central City’s underworld?

Negatives
There is not a lot I can say against this issue, other than Iris’ absence. However, I’m sure that we will see more of her soon. Similarly, I can’t complain of Kid Flash’s absence for most of the issue, as the epilogue makes it clear that he will be majorly involved in the next storyline.

Verdict
Once again, we see DC’s Rebirth ethos of bringing back the classic while moving forward play out. This issue makes it clear that the Rogues, who are staple Flash villains, have returned as a major thorn in the Flash’s side, but that they are now branching out into the deeper and darker world of organized crime. This should make for some interesting challenges for the Flash to overcome

A Podcast For All Seasons: S4E1 – We Need To Talk About The Batman