Summary
Attendance at the Church of Gerald (Now with free doughnuts!) is waning. Why in Gerald’s name would people want to worship elsewhere? Glad you asked. Behold Vorp! A snake in a business suit who wants you to rise up to take control of the world. Also, there is a potluck in the rumpus room after the Vorp services so…you know. Using his new found Vorpness, Slate fires everyone and hires Gorilla’s and Neanderthals who will do the work for half the price. He gets even richer and finds a woman who also worships Vorp who loves him for his, charm and charisma. Just kidding. She loves his money.

Meanwhile the appliances and household “gadgets” have a party. Vacuum (the purple mastodon) and Bowling Ball (the armadillo) continue their friendship only to have it torn apart by Wilma’s good intentions. They go on adventure. Dino, gets caught in the crossfire. Don’t worry, he is OK. 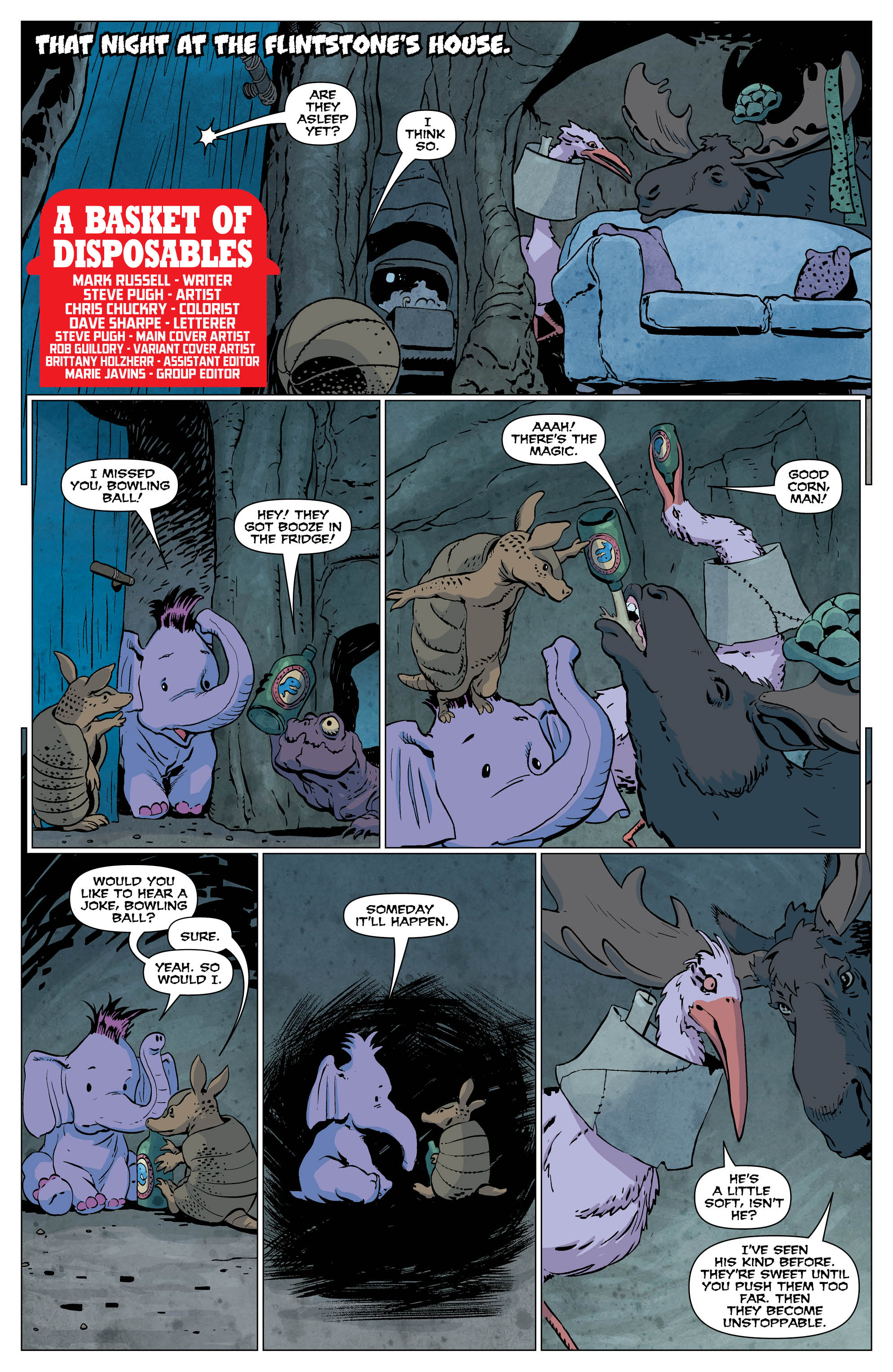 Positives
If you are only reading this book once, you are doing yourself a disservice. The city of Bedrock is full of glorious jokes for your enjoyment. Here are just a few: On the wall of the meeting room at the quarry there is a sign that reads: “Safety Try not to die” under a picture of a guy wearing a hard hat, which is of course, a turtle shell. In the cupboard where Dino is found on the final panel, there is a box of Fruity Pebbles (yes, this has been in the series before, but it is still funny.) Slate has four mail boxes. They read: Bills, Junk, Correspondence and Love Letters. The Love Letter tray is empty. The recycling center has a billboard that reads “Give your pet’s coat a healthy sheen with recycled meat.” Bowling Ball was sent to the recycling center. You do the math. 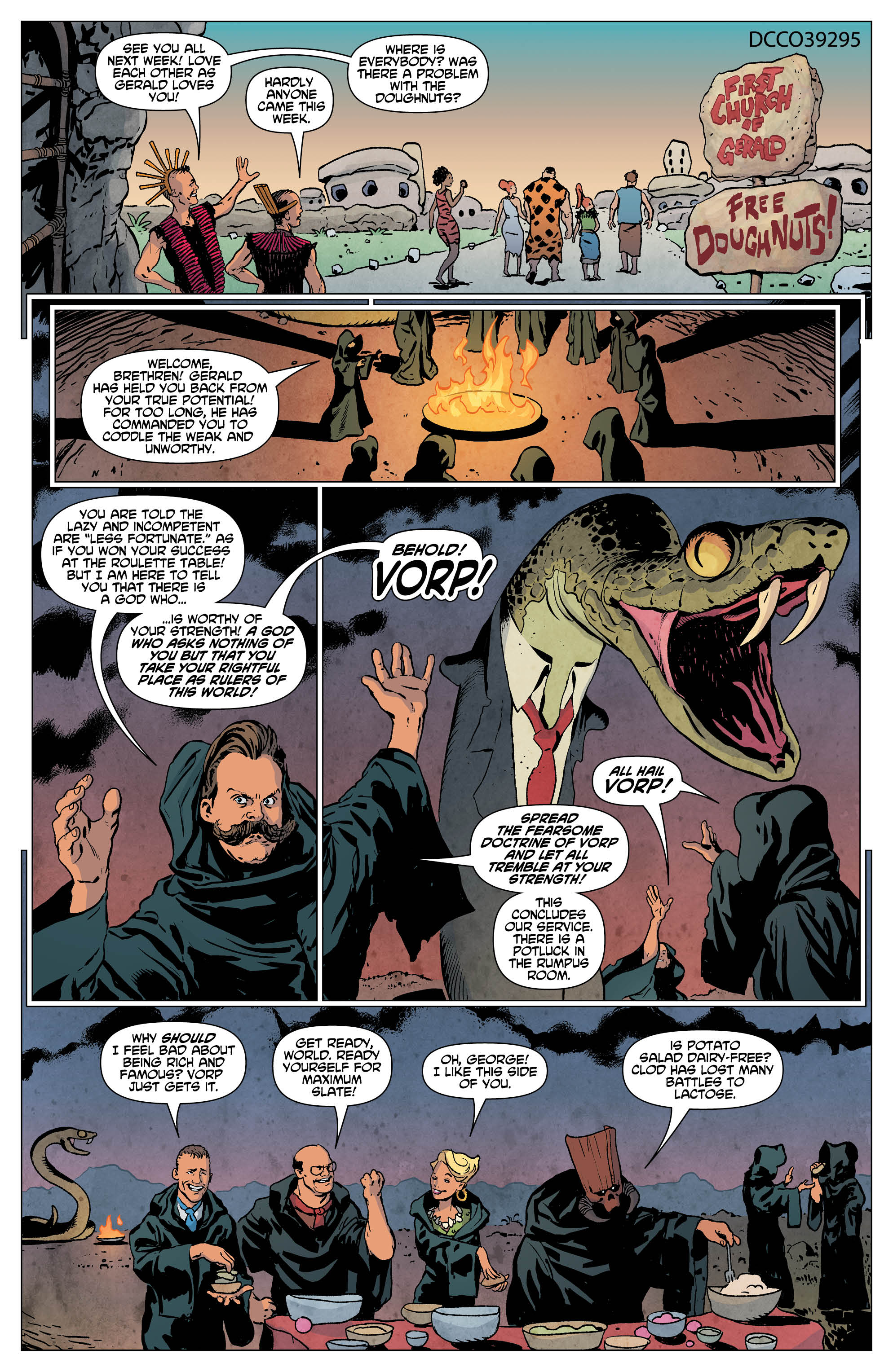 The details are not just punny, they are consistent and consistently good. The lamp is some sort of stork with a lamp shade. How is a stork a lamp? It has a candle right next to its head. It is not ever pointed out, but it there in every single scene. Little details make this expert storytelling. You’ve seen TV shows where in one scene the person’s shirt is buttoned all the way up and in the next angle the top button is down and then angle 1 it is back buttoned up. Does it take away from the story? No, but it does show a lack of editing and care. This book is full of care and thought. Everything has a purpose. Take for example something so tiny it might go unnoticed about the villain in our story.  Mr. Slate has the letter “S” on the knot of his neck tie. Hmmm. What kind of arrogant, megalomaniac has to have his name and initials on everyth…Oh right. Yeah. Hmmm. Well. So that happened. 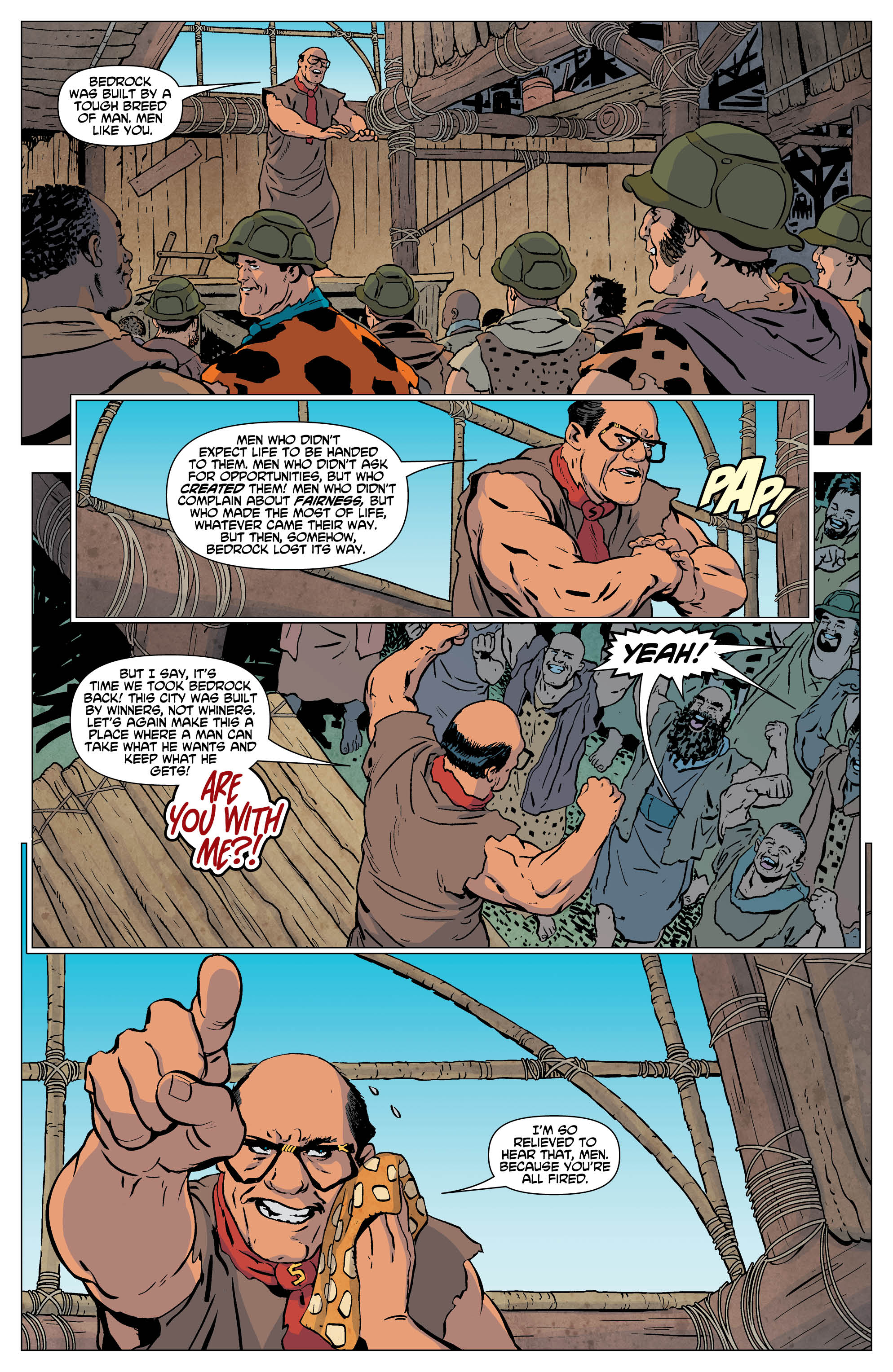 Negatives
Pebbles and Bamm-Bamm generally steal the show and there was no room for them here. That makes me sad. I am happy that they were not used just for no reason. I would rather they were not there than used poorly. Still, I missed them. Vacuum takes the role of moral center here and while it is clever and funny, it is not the same.

Verdict
Russell and Pugh just keep setting them up and knocking them down (with an armadillo I assume). There are only three issues left in this run. Enjoy the brilliance while you can.

The Flash: 19 Photo Preview Of Episode 314, “Attack On Central City”

Review: The Death of Hawkman #6