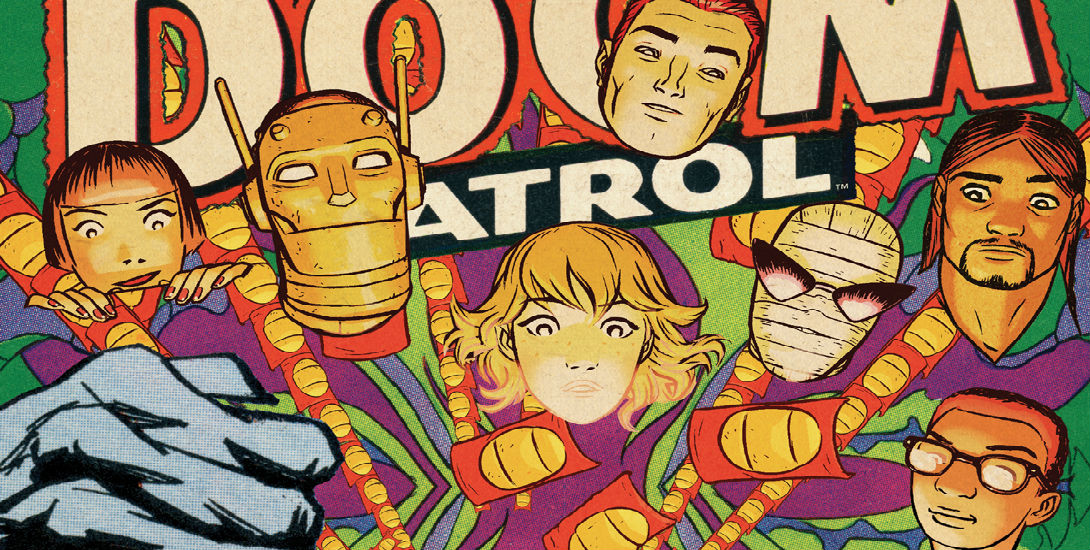 Summary
There are times when we don’t know who we are, or feel like we don’t know who we’re supposed to be. This opening arc of Doom Patrol addresses that with each character, but perhaps most it’s most clearly illustrated in Crazy Jane’s predicament as depicted in this issue.

After Casey’s parents have sacrificed themselves, Casey and the rest of the Doom Patrol have to find a way out. They’ve successfully stopped the Vectra from using Danny to create humans as a meat source for their fast food chain (Yes, it seems hard to believe, but this goes back to issue #1!).  They manage to escape all the while passing themselves in a weird time travel anomaly.

They end up crash landing on Earth in New Mexico, just outside the Janeland compound. Inside, of course, is Crazy Jane and a cult of followers who believe they are about to receive one of Jane’s 63 extra personalities. Larry is able to use his negative powers to psychically link Jane and Cliff to figure out what’s really going on. Jane explains that there is a dominant personality in her brain right now that is the cult leader and has a plan for the aforementioned distribution of personalities. However, Jane has subverted the plan to make sure that the Gene Bomb designed by the cult leader will actually only destroy this dominant malevolent personality and leave Jane’s other personalities in peace, and freeing the cultists. Jane is able to see that she is those 63 personalities and without them she would not be herself.

When the bomb falls and detonates Jane is freed of this dominant personality and the Doom Patrol is reunited again for the first time! A quick epilogue reveals that Casey’s new accidental roommate, Terry None, is not what she seemed to be and has her own agenda which picks up on another thread from early in the series.

Positives
Growing up, it often takes time to not only find out who you are, but who your friends are. Doom Patrol has long dealt with the outcasts of the DC superhero world, whether actual or self-proclaimed, the DP has been a home to some of the most unique characters. This version is no different, but what is different is that it becomes much easier to relate to the characters through the strong characterization and yearning for meaning that these characters exhibit.

Casey, Cliff, Larry and Jane show us how to not only find meaning in their own lives, but how to find the people they relate to most closely in the world. Jane’s acceptance of who she is and how she identifies herself despite this being in direct opposition to what the rest of the world may believe. This is much like Larry’s decision earlier in the series when he comes to understand that the negative energy completes his identity.

Cliff’s willingness to accept Jane for who she sees herself to be is a major turning point for their relationship. It also makes an excellent point about our ability to accept others for who they are. Cliff himself still struggles with his predicament, and he still has to come to terms with being a man without a real flesh and blood body.

Negatives
Without a doubt, the biggest drawback of Doom Patrol is the erratic shipping schedule. It’s probably a bigger concern for this title than other books because the story telling style is experimental and often non-linear. That said, reading all the issues in one sitting provide a very powerful message about identity and family and friendship.

Verdict
Sometimes it feels like the world’s been turned upside down and that is when we have to be like Casey and keep trying to be the light. It’s not often I recommend re-reading a series in one sitting, but these first six issues demand to be read together to mitigate the shipping delays. There’s something special in this series, but the non-traditional style makes it a little difficult to find it. By itself, this issue seems a little disjointed and obtuse, but read all together, Doom Patrol #6 caps off the first arc by reassembling the team through a meaningful exploration of self-identity and friendship.