Jaime Reyes has lost the Blue Beetle Scarab and the powers it gave him, so he has donned Ted Kord’s old Blue Beetle costume. Now he, Ted, and Teri Magnus hunt down O.M.A.C. to enlist his help against Arion. 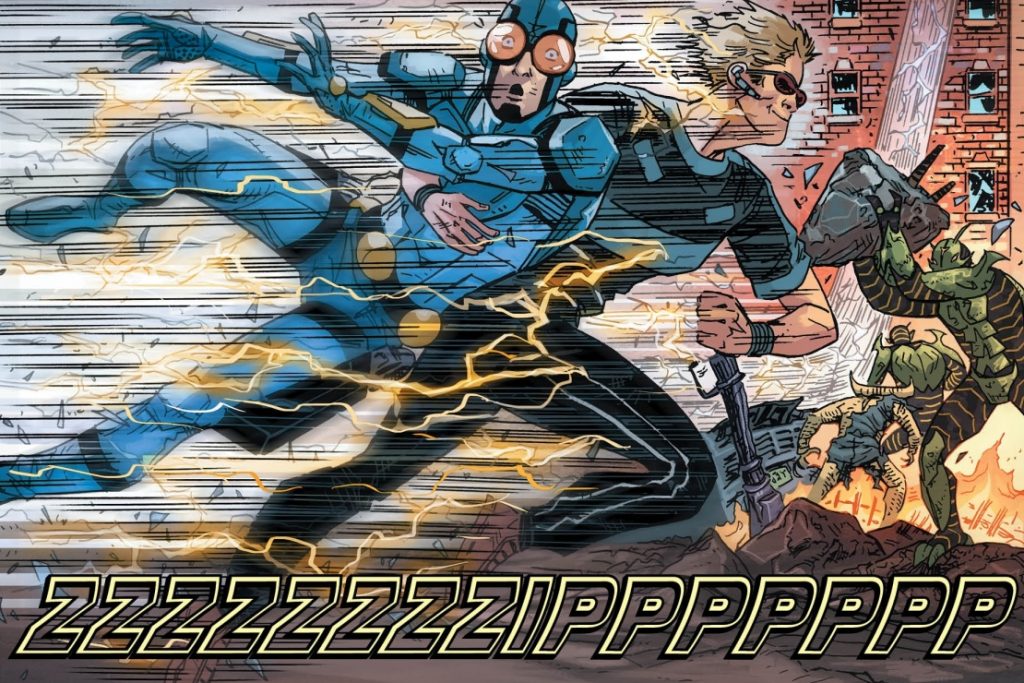 However, instead of Kevin Kho, O.M.A.C.’s alter-ego, they find themselves talking to Brother Eye, who is the entity pulling O.M.A.C.’s strings. Jaime manages to convince Brother Eye that aiding them against Arion serves his self-interest, so he allows O.M.A.C. to assist them.

Jaime then leads the others back to Arion’s lair, where they confront Arion and his army of insect beings. During the battle, Teri finds Doctor Fate’s helmet, and Nabu instructs her to take the helmet to the Tower of Fate.

Teri takes the helmet to the Tower at super-speed and, at Nabu’s instruction, places it on the sleeping Kent Nelson’s head. There is a flash of light, and Doctor Fate appears before Teri, restored to his classic costume.

Well, if there was any lingering doubts, this issue firmly establishes that Teri is the Flash from Justice League 3001. Her full name, Teri Magnus, is mentioned, she mentions “transversals” (the method of teleportation used in that title), plus a mention of her and Tina having come from another century. In fact, I didn’t catch on that Tina was the “Batman” from Justice League 3001 until this issue. 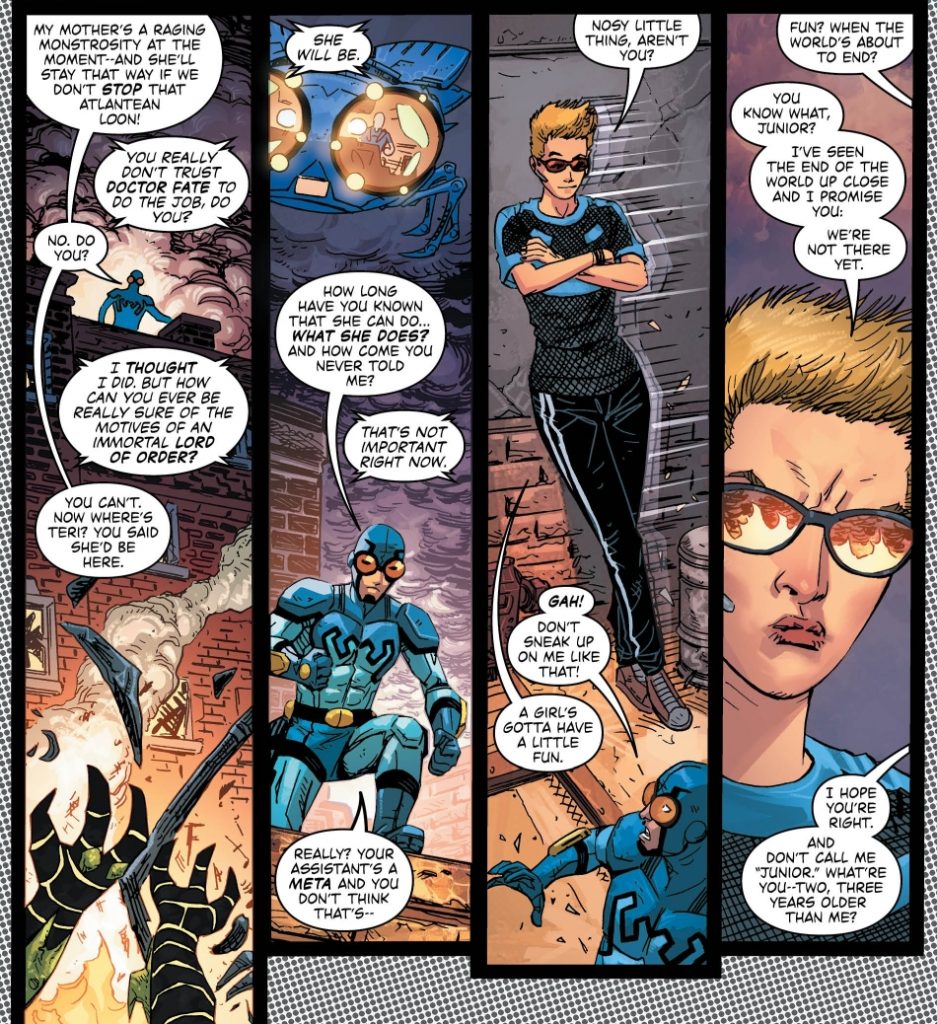 However, this raises some interesting questions. Does their having come from the 31st century mean that Ted is the Blue Beetle from that title having returned from the future with them? If not, then how did Ted meet up with Teri and Tina?

Also, it seems that we are another step closer to the return of the Justice Society. The classic Kent Nelson Doctor Fate is back. It’s now apparent that the Doctor Fate we’ve seen so far in this title was the Helmet of Nabu acting on its own without a human host. That explains how Fate has seemed so cold in his characterization so far, with no human presence to balance the spirit of Nabu.

And I know it’s temporary, but I just love the chance to see Ted’s Blue Beetle costume again. Plus we get to see Ted back in action as well. It’s too bad it’s not Ted in the costume. 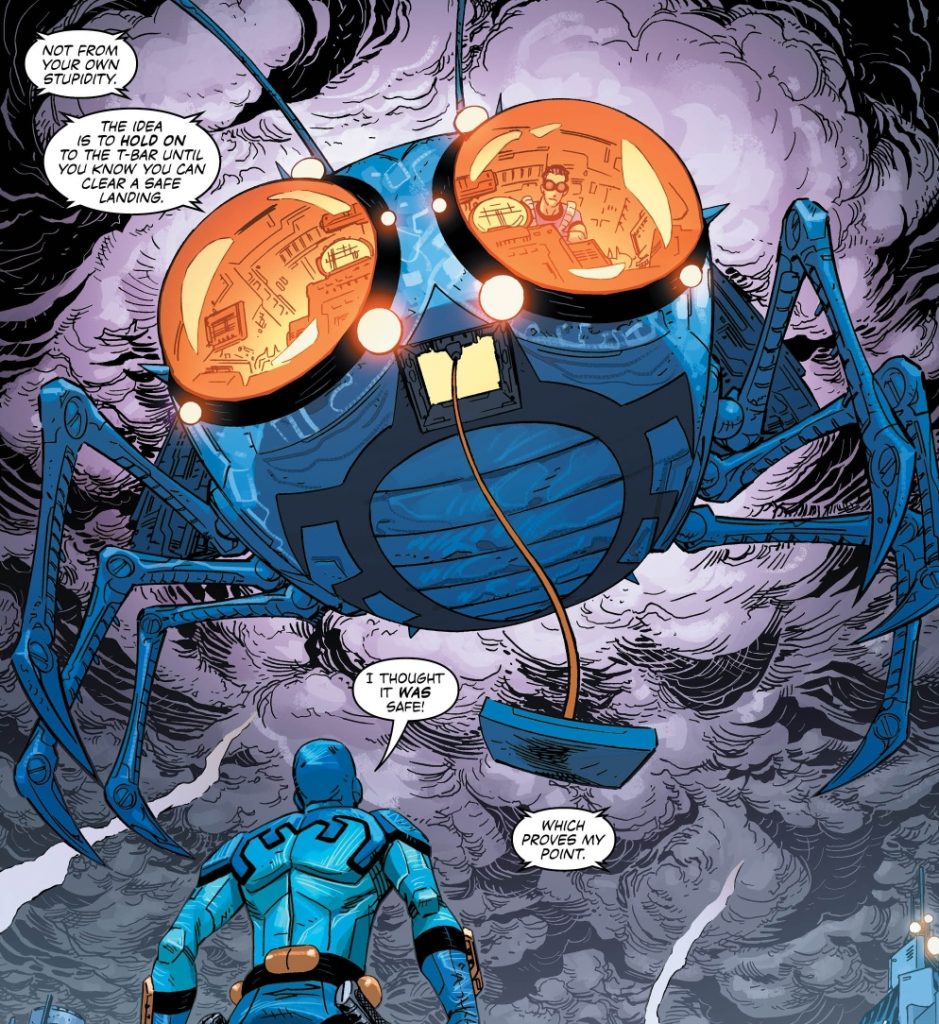 It seems that the events of the recent Doctor Fate series is being ignored. It’s hard to say how Khalid Nassour’s time as Fate can be worked in, considering Khalid was the current possessor of the Helmet of Nabu, and that Kent Nelson had also appeared in that title in the classic Doctor Fate costume. Hopefully they will clear up Doctor Fate’s history as the story progresses.

Jaime Reyes as the Blue Beetle has generally been well received, but this title has added an element the title lacked: a sense of legacy. Plus, many readers bemoaned the loss of Ted Kord. This title truly gives us the best of both worlds by giving us both Jaime and Ted, and they work together better as a team than they do as solo heroes.