Whenever a character or concept hasn’t appeared for a while, it’s usually a good idea to have a significant narrative of reintroduction.  Doom Patrol has had many incarnations over it’s nearly 55 year history.  Always, at the very least quirky, the “World’s Strangest Heroes” is probably most fondly remembered for Grant Morrison’s mostly Vertigo run in the late ’80’s / early ’90’s.  One might imagine Gerard Way’s take on the team to be heavily informed by this run.  And, one would be right.  Mostly.  At least, partly.  That is to say, stylistically.  Or, perhaps, more accurately put, conceptually.  But, then again, weird is just weird.  Right?  Well, no.  It’s not.  Because, at the same time, Way is able to incorporate the lightness of  ’60’s comic books as well.  This is also seen in Way’s work on Cave Carson Has A Cybernetic Eye.  Certainly, these books have a seriousness and modernity to them, but they also capture the pure fun of comics from yesteryear.  Casey Brinke, the main character in “Brick By Brick” is the epitome of this notion, as well as literally.  You’ve got to read the book to see what I mean.  Remember, a creation found in comics…. (Trying not to give it away…)  It’s so very clever. 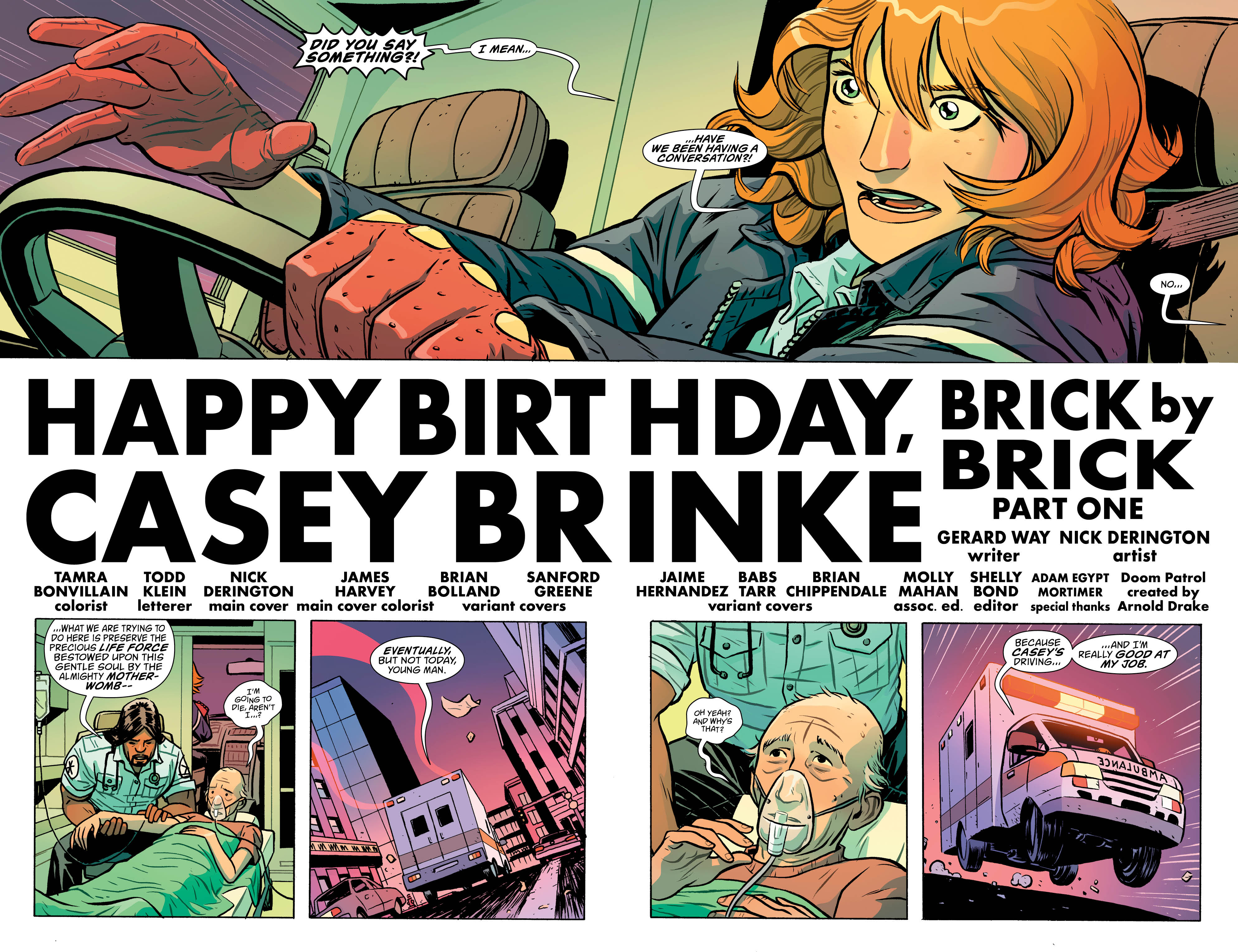 Brick By Brick is a rebuilding of the team, but also a reexamination of the characters who make up the team.  It’s not simply old friends getting together, but an exploration of character as well.  And it’s all seen through an original and instantly likable character, Casey Brinke.  Casey is an ambulance driver, and she loves her job.  Things start to get weird for her when she is on a call and ends up meeting Cliff Steele, Robotman.  Cliff is just as cantankerous and likable as ever.  Way gets Cliff’s voice just right. 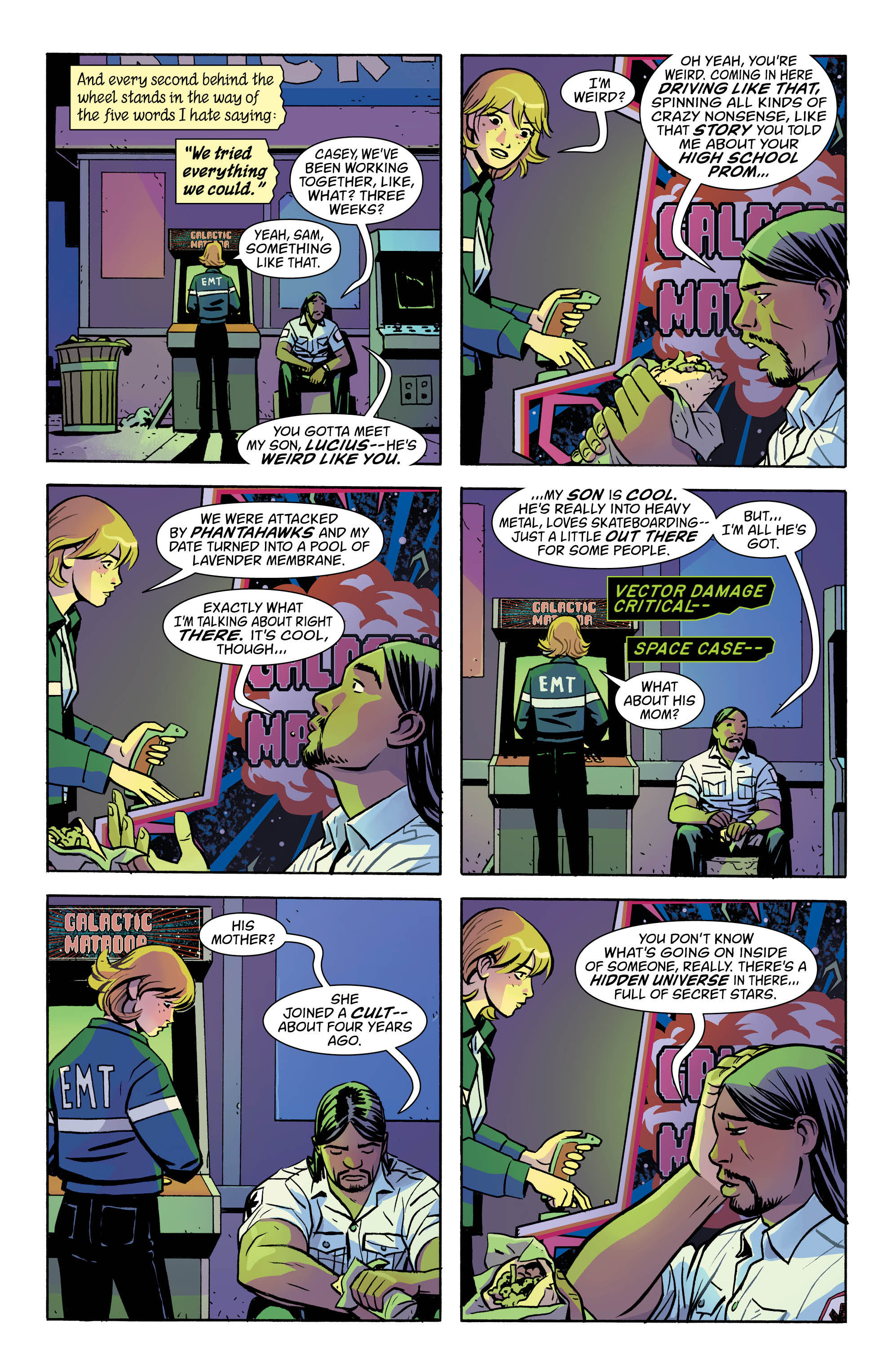 Cliff ends up leading Casey on a wild extra-dimensional journey that ends up not only reuniting members of the Doom Patrol, but in the process, they also stop an alien race from invading and taking over Earth through the establishment of a fast food franchise.  A metatextual statement on the flailing McDonald’s corporation?  I don’t think so, but it’s that sort of metaphor that makes the style of this storytelling so interesting and elusive. 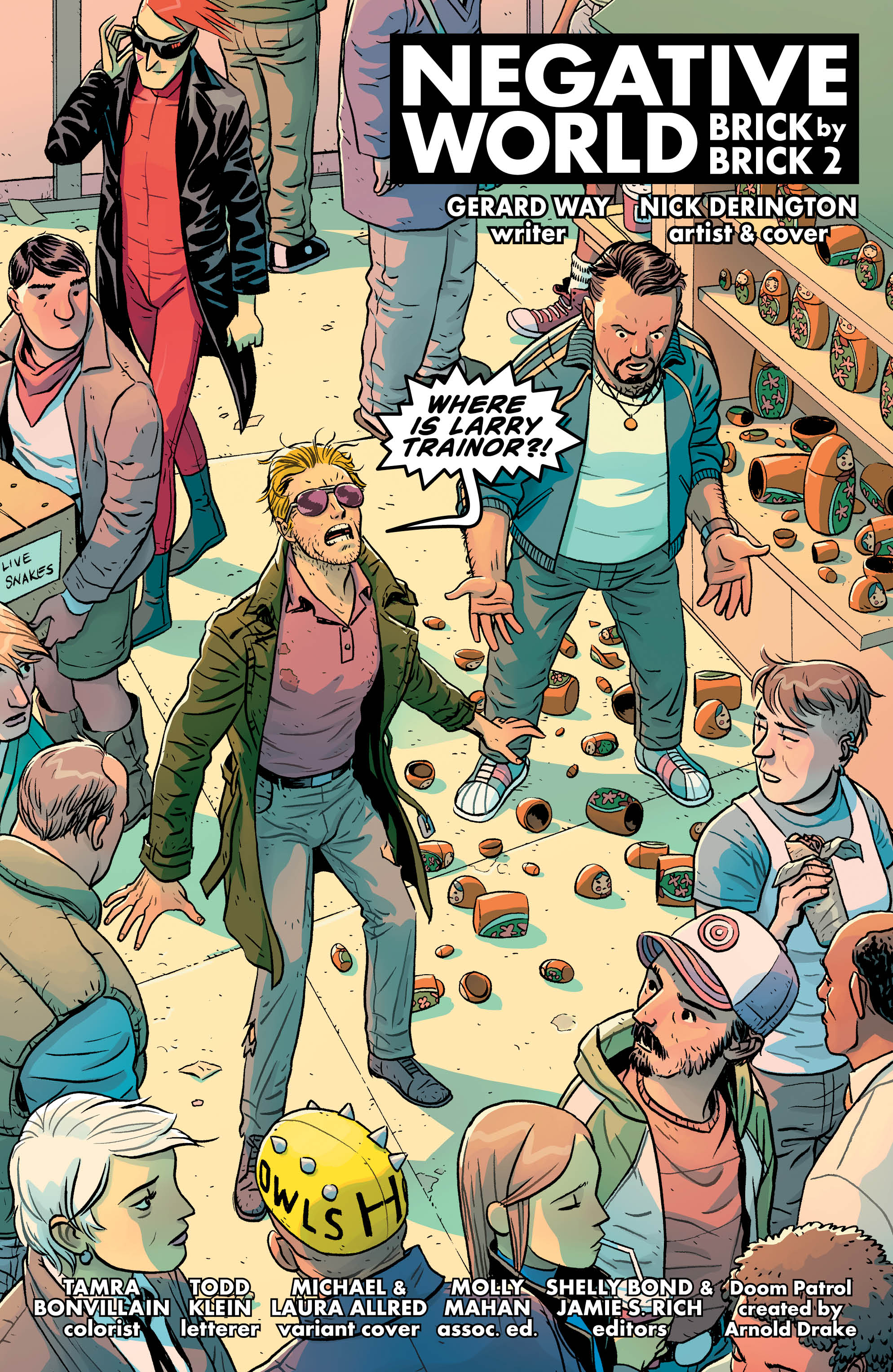 This journey includes Negative Man, Larry Trainor, Flex Mentallo, Crazy Jane and Danny the Street.  Or Ambulance, or comic book.  Or, whatever he’s become.  The Chief, Niles Caulder has a few cameos, but doesn’t take control of the team.  Upon reforming, the team has a momentary respite as they adjust to their new status quo, and it looks like they aren’t quite done with those aliens yet!  So, what was that business with Casey’s new roommate back in chapter one?  Hmm. 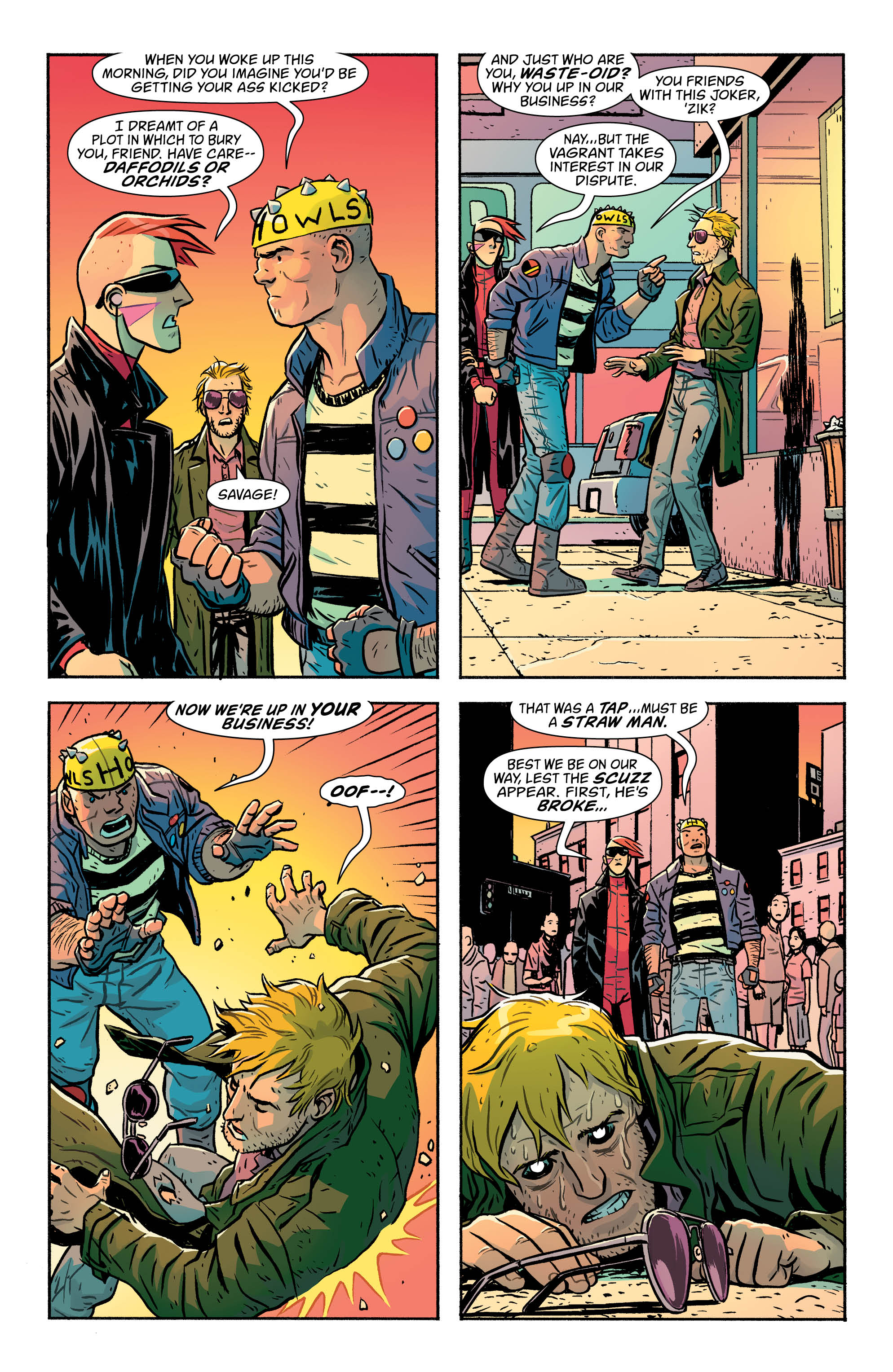 Grant Morrison received a lot of accolades for his story telling approach to the Doom Patrol about 30 years ago.  This current incarnation is adventurous stylistically as it is more about concept than linear story telling.  I guess that’s the best way to describe it.  As the tale takes the reader through other dimensional worlds and concepts that are challenging to understand in a literal sense, there is a strong through line of character.  It almost doesn’t matter how Casey gets from point A to point B, but what matters is that she does and the people she meets along the way and how those people inform her character. 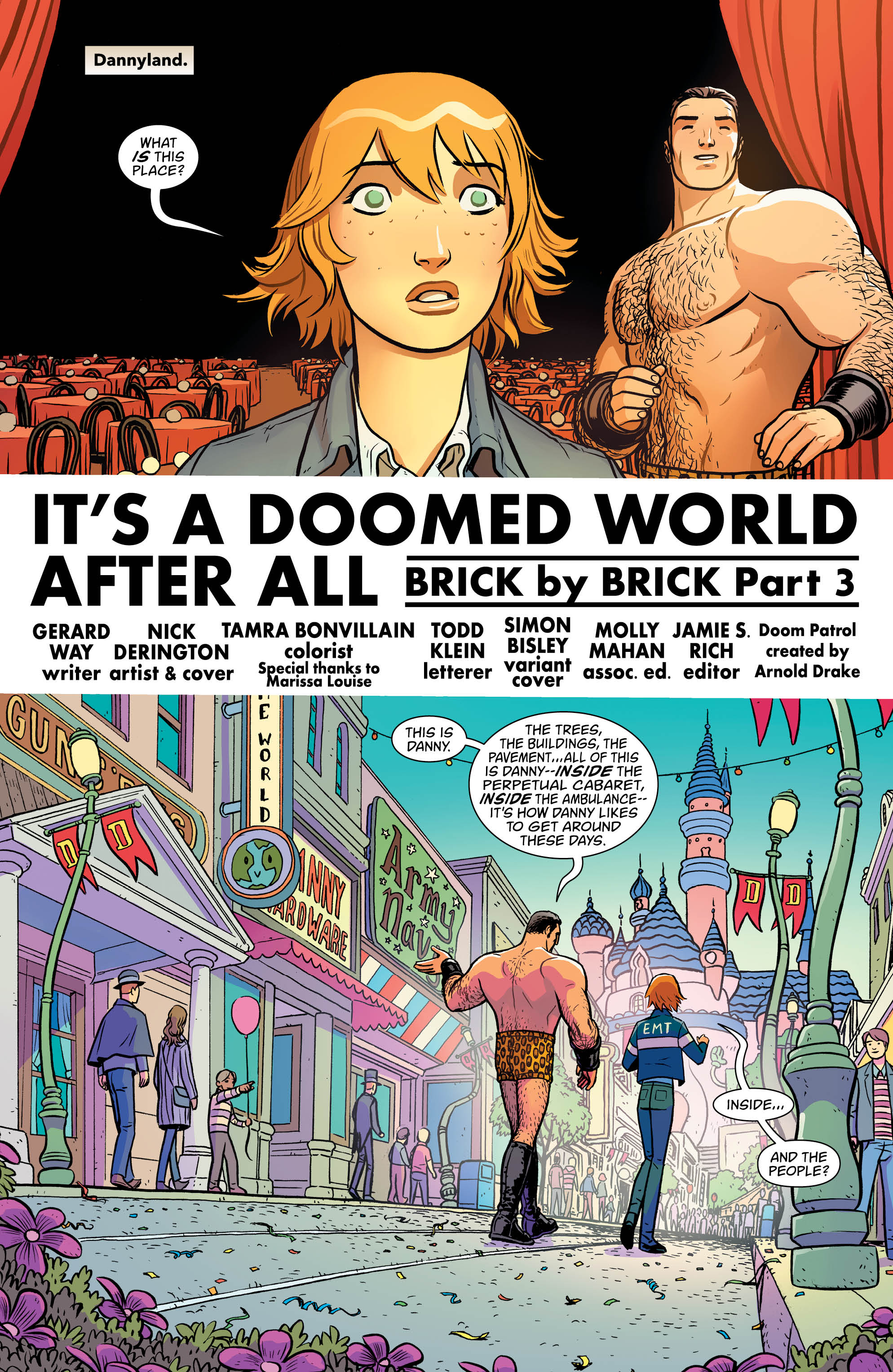 As the story goes on, Casey, Cliff, Larry and Jane show us how to not only find meaning in their own lives, but how to find the people they relate to most closely in the world. Jane’s acceptance of who she is and how she identifies herself despite this being in direct opposition to what the rest of the world may believe. This is much like Larry’s decision earlier in the series when he comes to understand that the negative energy completes his identity. 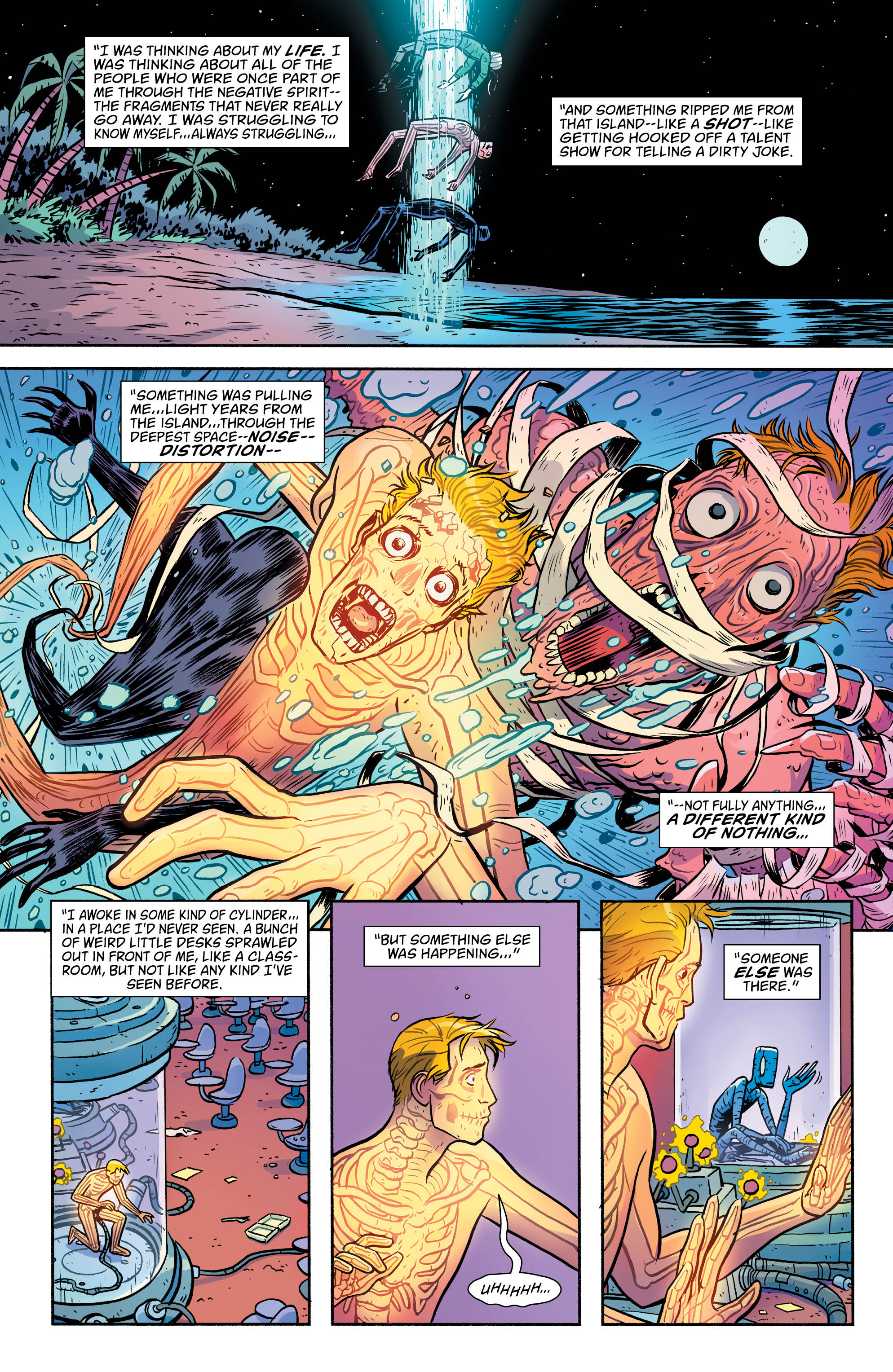 Like any art that is experimental and boundary challenging, Brick By Brick will have it’s detractors.  It’s not easy always.  For those who are unfamiliar with conceptual story telling this will be a challenge.  For those who want classic super-hero action, it’s in this book, but it is tempered with heavy characterization which is more important than the action as well as an approach that is more conceptual than linear. 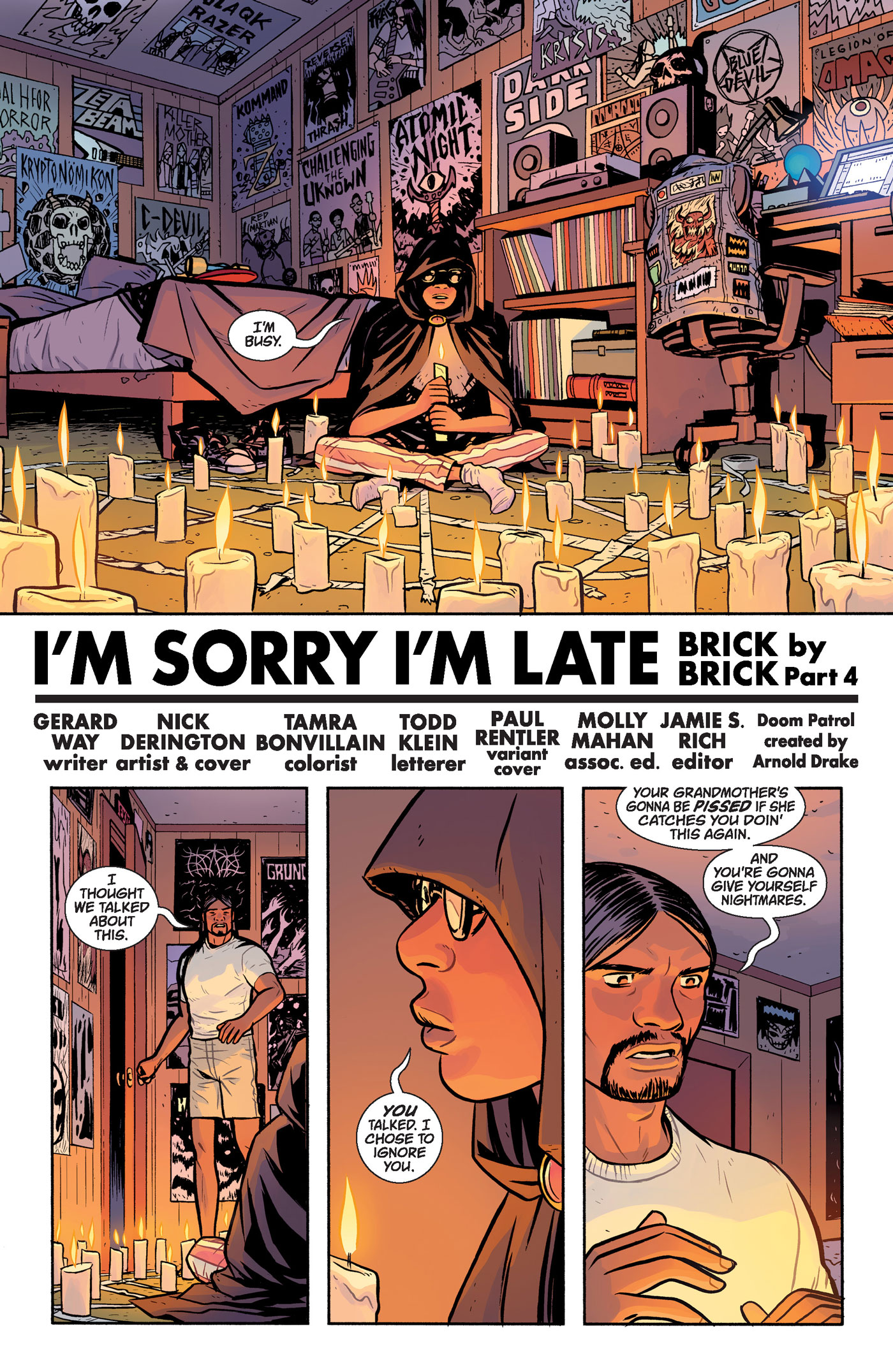 Sometimes it feels like the world’s been turned upside down and that is when we have to be like Casey and keep trying to be the light. As the team comes together, the weirdness becomes more and more apparent and the playing field expands. The Doom Patrol, it seems, will not be bound by time, space or psychological coherency. You should’ve known you were getting yourself into this sort of thing…. 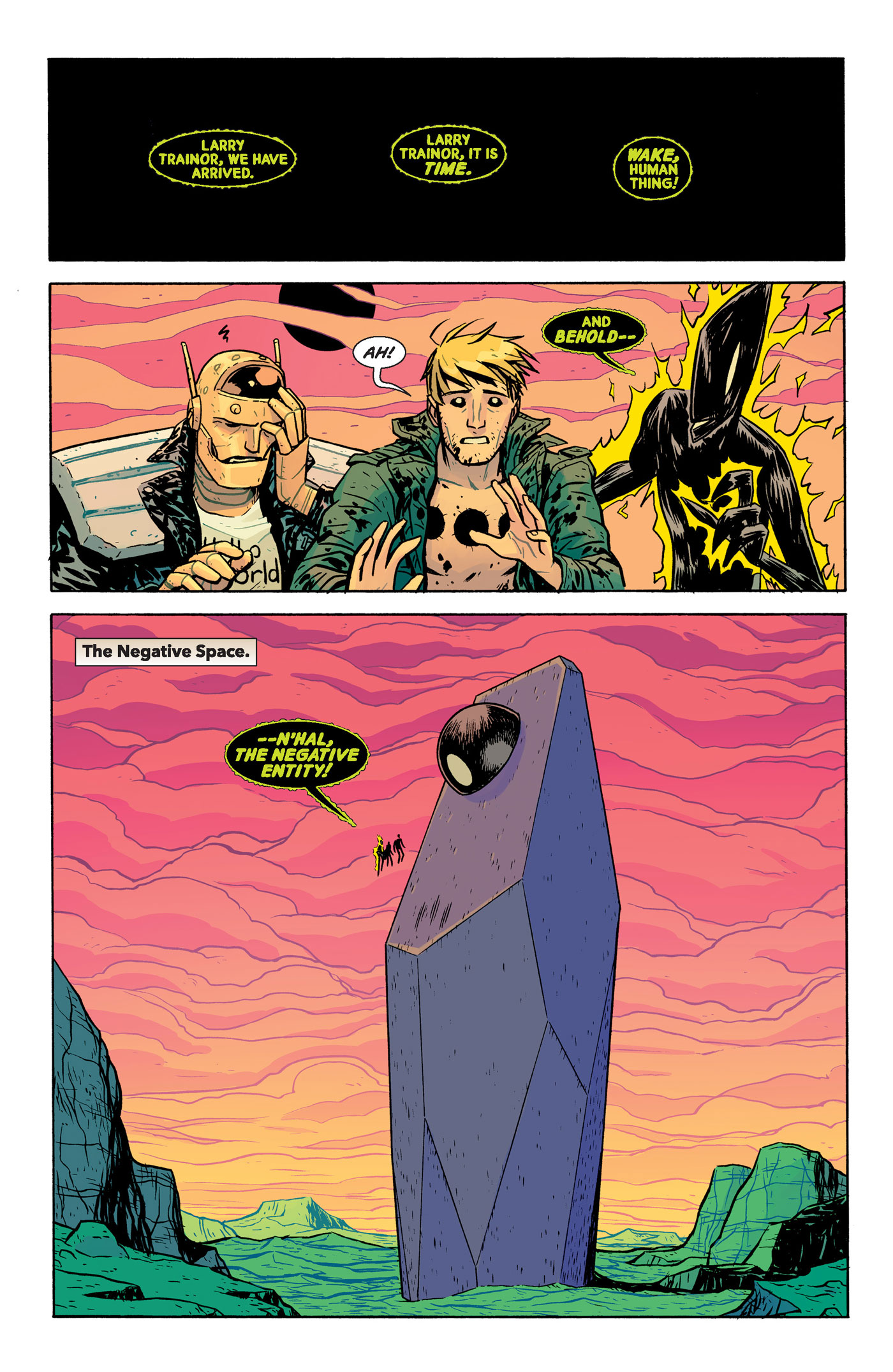 Way, Derington and Bonvillain take chances, but they are creative decisions that push the boundaries of story telling.  They succeed in telling an exciting, character driven tale that is just as remarkable for it’s style as its content.  “Brick By Brick” is a tour de force of experimentation that works because the characterization is so strong.  It may be too much for some, but at the end of the day, it’s great comics and great art.  Comics are a unique medium which allows for text and image to not necessarily dovetail uniformly.  Way, Derington and Bonvillain make the most of the medium as they tell a story that pushes the creative boundaries of sequential art.  Unfortunately, it may not be for everyone.