Merlyn Casts His Spell – Live in London With John Barrowman 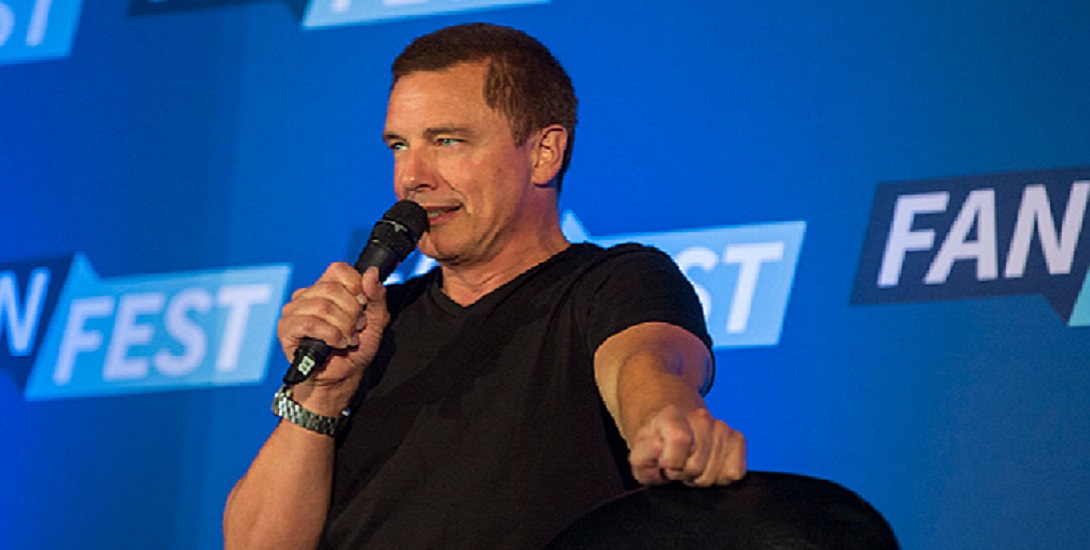 John Barrowman is regarded as something of a National Treasure in the U.K. The Scottish born actor and singer is a household name due to decades worth of work on both stage and screen. He’s been a leading man in the West End – our Broadway – and in the  legendary British sci-fi shows Doctor Who and Torchwood, where he played the heroic Captain Jack Harkness. He’s also a successful author, having written audio adventures, novels and even the Malcolm Merlyn comic for DC.

These days, he is known worldwide as the villainous Malcolm Merlyn from Arrow and DC’s Legends Of Tomorrow.

It’s A Kind Of Magic

He recently appeared at the first ever Heroes & Villains FanFest over in London, where he received a real hero’s welcome. DC Comics News was there to capture all the action, laughter and wardrobe changes. Mr. Barrowman has never been shy, he hit the stage wearing a blue TARDIS dress over TARDIS leggings, sporting his continuing love for the series that made him a household name, Doctor Who, and white high heels. Vintage Barrowman! A stark contrast to the Dark Archer from the DC Universe. Oh… those rambunctious Thespians.

The actor sang, danced, joked and entertained for a solid hour. He also answered questions from the fans – including a certain London based DC Comics News roving reporter. I could have written pages and pages on all the Doctor Who and Torchwood related questions, but the name of this website is DC Comics News, so I’ve stayed within the realms of his work within Arrow, DC’s Legends Of Tomorrow and the musical episode of The Flash.

Here are some of the highlights:

Fan – What would be your choice of death on the TV show? If you could write the script, how would you write yourself out?

JB – Well she’s just given the plot away, hasn’t she? What would be my choice of death? I don’t know… having sex!

Fan – You’ve played hero and villain, as Captain Jack and Malcolm Merlyn. Which do you prefer playing?

JB – I don’t answer “Favorite” questions, because once I decide and say what it is, you guys never let me change my mind ever again, right? For me, what’s great about what I do is that you guys come on a journey with me. From Doctor Who being a hero, to Torchwood getting into trouble and even being a little bit of a bad guy sometimes, then to playing Malcolm Merlyn and being a complete villain… that’s what’s thrilling for me as an actor. I get to wake up every morning and go to set and do all of these different kinds of things. It was really easy being Captain Jack and being a hero, but what surprised me most, is when I started playing Malcolm Merlyn it was really easy being bad, I had no problem getting into it. It’s so much fun just to be a total A hole.

Fan – With Earth 2 and the parallel versions of characters, would you like to play a different version of Merlyn?

JB – That was, like, encapsulated in the musical episode of The Flash, which was AWESOOOOOOME! Loved it! I sent an email and said that if you don’t have me in it, you’re stupid!

I’ve never thought about his life in an alternate universe. However, on Legends of Tomorrow, we have the Spear of Destiny, so if he could change reality I think he’d like his old life back. He wants his plane back, he wants his fancy cars, he wants his hand, the life, the wealth, the power. He doesn’t want to keep living his life in the shadows. I think that’s what he’d want.

But if you really want to know Malcolm’s back-history, and the back-story, my sister and I wrote the Malcolm Merlyn comic-book for DC, and that is Malcolm’s lore and story for THE REST OF TIME! Which thrills me to bits. So that to me is what his alternate reality would be. To have what he once had, back in season one and season two.

It’s at this point during the Q&A that your mild-mannered reporter licked his pencil, picked up his note pad and got ready to record the facts.

DC Comics News – The question I want to ask you, as you’ve been thrown hundreds of questions over time – and you’re not shy…

JB – No. (laughter from John and the crowd)

DCN – What’s a question you’ve always wanted to be asked? What’s something you want known that no-one’s ever asked you about?

I have been asked loads of questions, I do love the questions and I love to talk. (loud laughter from the audience) I mean… I do. Sometimes it’s hard to shut me up! It’s nice to answer questions about things that I like? Not many people know that I’m a big fan of cars, I like to tinker with cars and like to fix them… (points at blue dress) it shows, right? (giggling)

I cook, I love to cook. I don’t know if I’m a very good cook, Scott (John’s husband) says I am… I never really even taste it first.

(Laughs from John and the crowd)

Those kind of questions. It’s nice to have questions that are different sometimes. So, listen, thanks. That’s why it’s a thrill for me to do these shows, because I like to talk about those things.

That question is one I like to throw out there. Sometimes the interviewee has an answer straight away, sometimes  – like with John – it throws them for a few seconds. It’s a question I asked a few of the celebrities I spoke to over the weekend with some fantastic, and surprising results.

The fate of Merlyn in the Berlantiverse

JB – Malcolm (should possibly) go to jail for a little while, he does his time… and then to come back to Star City and help Oliver. Rather than him coming to Oliver for help, he helps and doesn’t have to do it in secrecy or privacy, and they could be open about having that sort of relationship.

If they wanted me to, yes, I would (do more episodes as Ra’s Al Ghul). I loved being Ra’s and, in fact – don’t tell them – but I kept the ring! When you see it going down in that thing, and it’s melting, it didn’t really melt. It was going down in the water, it looked really cool, right? So when it was down there and they said “Ok, yeah, we’ve got that scene. Move on… ” I went (mimes putting his hand in the water and sneakily pocketing the ring).

So, there we have it. After 5 years playing Merlyn, it looks as though the character has had his swan song… but looks can be deceiving. The questions raised by the fans re: alternate universe versions, a reformed and penitent version, or even the return of the villain we love to hate leading the League Of Assassins, all still mean there’s plenty of scope for the character to come back.

You can’t keep a good bad guy down, so nobody knows for sure what surprises the future may yet hold for John Barrowman within the DC Multiverse.