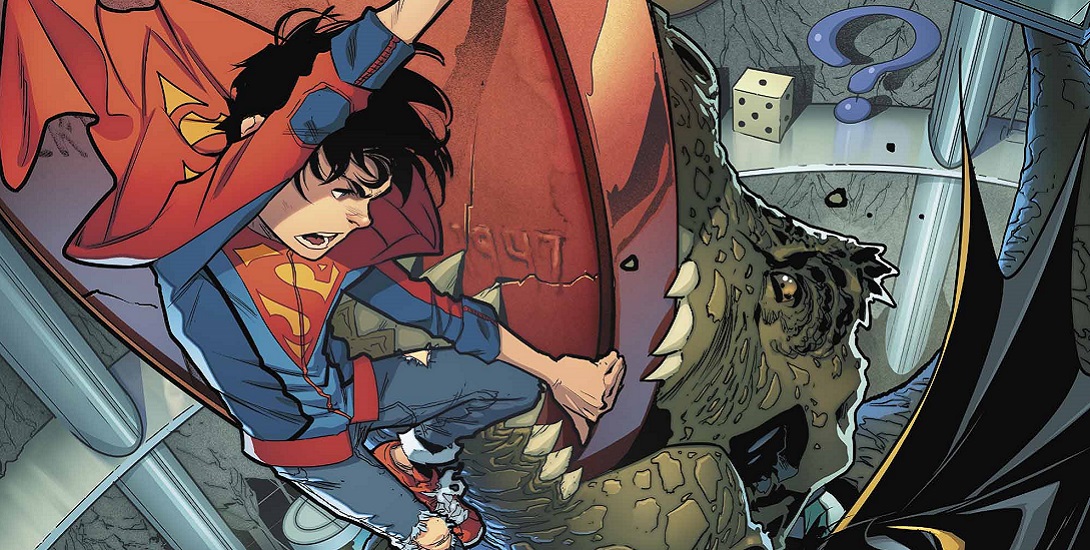 After being found out by Superman and Batman, Damian and Jon are grounded for their little adventure fighting the Amazo family. Damian is stuck in the batcave with Alfred and Ace while Batman patrols the streets. Jon on the other hand, is stuck doing his chores, without his powers!

Between the stress of being grounded and the impending move to metropolis, Jon finally had enough and takes off as fast as his legs will allow him.  They quickly clash of course and the battle could easily reduce the cave to rubble.

While the two boys are being moody and frankly a drag on the mood, Alfred brightens this issue with a few one liners that are simply perfect. Seeing the two boys grumble and fight with each other is also fantastic. While they couldn’t be more different, you strive to see them unite.

The art in this issue is wonderful, it is extremely dynamic. Each movement, no matter how small, is flushed out and full of emotion. Alisson Borges must have studied a lot of posture and expressions because she nailed them all on the head. One particular shot from this issue really resonated above the rest however.

Jon rips open his shirt, revealing the iconic “S” on his chest like Superman would, but unlike his old man, he tears the shirt to pieces instead of just popping off a few buttons. It is a great shot that embodies the frustration of a teen suppressed by his parents, it also perfectly shows the difference between Jon and Clark. They may be family but they are much different. From what drives them to what they want for themselves, Jon is a totally different person.

With this issue, the head butting between the two boys also comes to an end. While it seems quick, I believe we will now get to see a lot of arguments between them and exploration of opinions which we won’t see between their parents. The interactions between Jon and the Titans is also going to be quite exciting as well!

From the get go, this issue is full of action and smart quips. I enjoyed every page and found myself laughing at the boys and Alfred quite a few times.