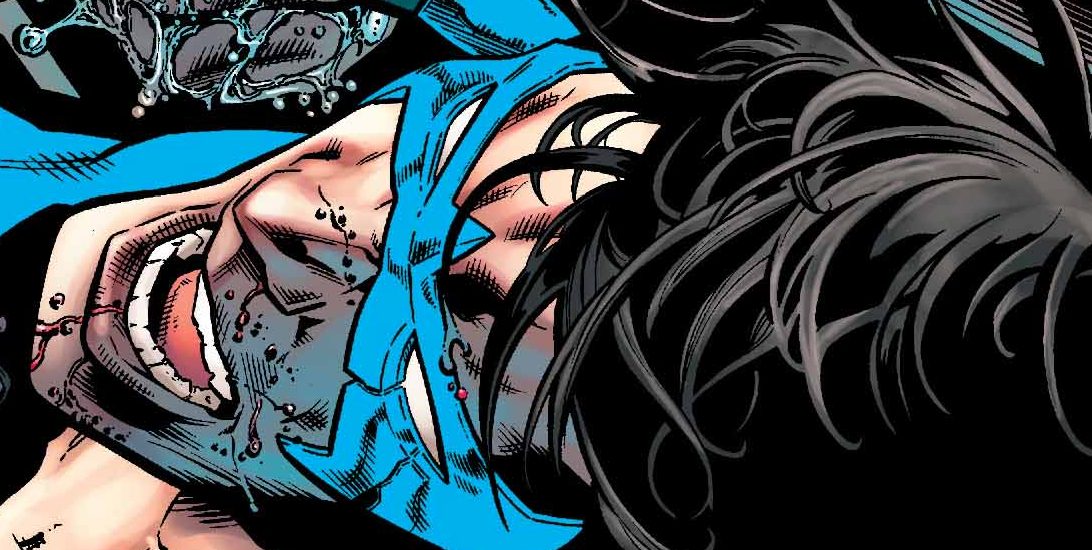 “Casino’s closed! Go back to Connecticut, you barnacles!”

Nightwing has to science himself out of the volatile situation Blockbuster left him in while stranded on Tiger Shark’s villain-infested yacht. Roland headbutts a mutant tiger with the head of a…well, guess.

I love it when a plan comes together, and I love a plan that comes somewhat from Clock King. I just love Clock King, I love a bit o’ temporal distortion in a mad-dash rescue mission, and it’s always better when it all goes down on an exploding boat. If you share my oddly specific pallet for this sort of thing, you’ll be thoroughly pleased with this issue.

Tiger Shark calling everyone in his casino “barnacles” was definitely a big positive for this Spongebob Squarepants fan right here. It was just silly and melodramatic enough to make the ensuing scrap between Blockbuster and two actual mutant tiger-sharks. I really don’t know how they managed it, but it’s actually a really good fight. Roland gets to wax lyrically about his childhood shared with his brother Mark while they both grew up on the hard streets of Bludhaven, while ripping the jaws off of monsters. It’s kind of poetic.

The story flows quite nicely from Roland’s super-charged, super-mutated brawl into the stand-off with Dick in his newly acquired casino, where Roland comes off as a very familiar real-life villain, and Nightwing gets to place a choice blow to his psyche.

A hit that gets returned in kind later when Dick finally reaps what he sewed with Shawn, because let’s face it, he’s dropped so many balls with her at this point. Shawn’s got her own bad ideas to get on with now, as Pidgeon has dropped back into her life and is adamant about bringing back the old Defacer.

I was already uneasy about having to call a character “Giz” before finding out he had a pet squirrel called “Goob”. Don’t feel I need to go into any more detail here, I’m just not into it.

I wonder how Dick Grayson gets a job as a card dealer in a casino when his only personal reference is the world-famous billionaire Bruce Wayne;

“Well uh Mr. Grayson we took a look at your resume, it’s a little bare but are you sure you wouldn’t be more qualified for a management role, perha-“

This issue gives a great resolution to the previous issues’ sprung trap and pushes the big players of the story into new, interesting and dramatic roles. Now that Roland has replaced Tiger Shark as the Big Man of Bludhaven, I imagine things will be pretty tense in the big bad city.