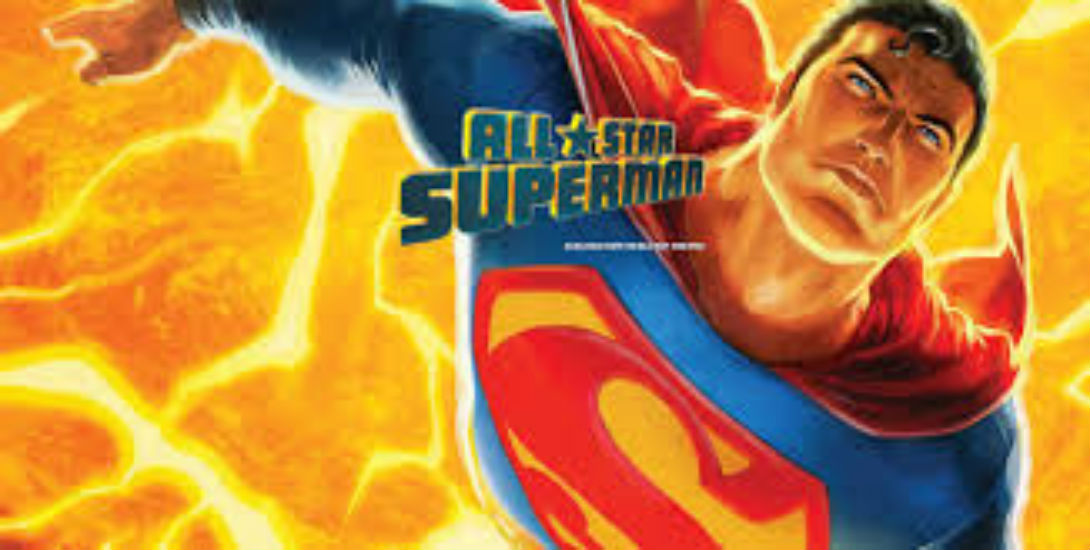 Based on the original 12-part comic by Grant Morrison and Frank Quitely, All-Star Superman takes many of the wildest and classically Silver Age story motifs and wraps them into an emotionally modern take on the last days of Superman.  In some ways, the story attempts to close any loose ends that such a tale might leave open.  The most significant of which is Superman and Lois Lane’s relationship.  That’s where the emotional arc begins.

The film opens with the most concise and perhaps, moving retelling of Superman’s origin overlaid on a sequence of Superman saving the first manned mission to the sun.  Superman’s plunge into the sun overcharges his cells and they are slowly destroying themselves.  For a while Superman experiences heightened intellect, powers and drive.

Knowing he is in his final days, Superman confesses his Clark Kent identity to Lois and takes her to the Fortress of Solitude.  He shows her everything and surprises her with a gift, super powers for 24 hours.

Not surprisingly, the mission to the sun was sabotaged by Luthor, thus putting Superman in the position to be damaged by the Sun.  Luthor’s treachery is discovered and he is arrested and sentenced to death.

Superman doesn’t stop working, despite the fact that his condition is beginning to deteriorate.  After finding a suitable planet for the bottled city of Kandor to colonize, Superman returns to Earth to find two space-lost Kryptonians have taken over Metropolis.  They have been infected with Kryptonite poisoning and Superman can only save them with voluntary banishment to the Phantom Zone.

As Luthor is about to executed, he takes his last meal, a super-potion he replicated from the same one Lois took.  It turns out he hi-jacked one of Superman’s robots in the Fortress of Solitude to get the formula.  This 24 hours of super powers allows Luthor to survive the electric chair and seek out Superman for a final showdown.  He’s also enlisted a rogue sun – Solaris – to change the Earth’s sun to red and negate what’s left of Superman’s powers.  Superman is able to stop Solaris, but it takes all he’s got left.

As Luthor comes to the Daily Planet looking to announce his new reign supreme, a weak Superman stands up one last time to put a stop to the criminal scientist.  As Luthor has Superman on the ropes, he finally understands how Superman sees the world – an effect of the super serum.  In this moment, Luthor turns as he realizes that he really could save the world, but he never really wanted to.

Solaris, though defeated, double-crossed Luthor and manipulated the sun beyond what Luthor had requested.  It is now turning blue.  Superman, weak and visibly deteriorating, flies into the Sun to fix it.

One of the most difficult aspects of adapting any book to film is making the difficult choices of what to cut and what to keep.  All-Star Superman is no exception.  The original comic is quite long, so it is even more difficult for this adaptation.  The choices made ensure the overall story arc is not compromised and the tone and emotional content is replicated.

The moments with Lois and Superman and the emotional arc between them are the strongest aspects of the film.  The early sequence with Lois’s birthday has plenty of space to breathe and sink in on the viewer.  Superman’s final sacrifice is powerful and emotional.  Lois’s belief that Superman is not dead and just fixing the Sun keeps the hope that Superman represents alive.  Surprisingly, Lex’s last moment repentance is also believable and moving.

Despite keeping the substance of the story, there are moments that feel shoehorned in.  It’s the problem with editing the longer work down to a reasonable run time for an animated film.  It causes the pacing to feel rushed at times.  There are so many essential aspects to this story that it is extremely difficult to keep enough.  A longer run time or an even more truncated narrative with fewer scenes would help the rushed feel the film gets at times.

All-Star Superman is a bit of a love letter to the Silver Age.  It recapitulates common Superman themes and story elements into a grand narrative that becomes more than homage.  The love of the source material comes through as the contemporary take on these elements is filtered through a lens that humanizes the relationships between the characters and settles firmly on emotions.  Despite the problems with pacing, All-Star Superman is an enjoyable film that will move the viewer. Don’t be surprised if you’ve got some wet eyes after viewing.