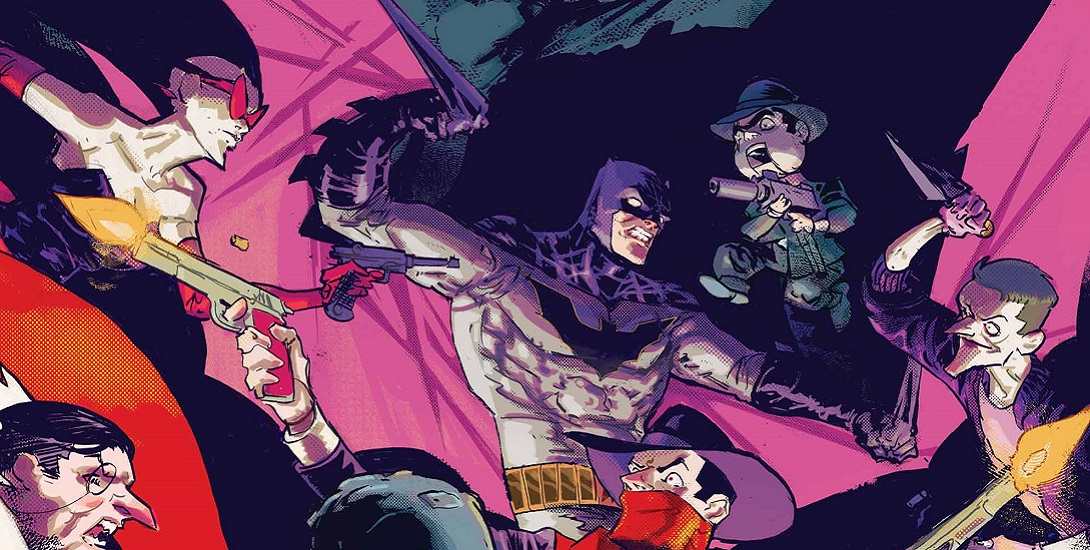 With the help of the Joker, the Stag has managed to capture Batman. Together, along with 20 other of Gotham’s finest villains, they have bound him to the ceiling and left him dangling for his life. Before they can carve Batman’s beating heart from his chest, the Shadow intervenes and frees Batman from his bonds. Amidst gunfire, slicing blades, screeching monsters, and insanity, the dark duo must find a way to survive. Meanwhile, an anonymous call has been placed with the GCPD informing them of the unusual activity. Gordon and Bullock, along with the entirety of the GCPD, speed toward the tip.

This issue was wonderful. It has action, a few twists, and just enough flashbacks that it hit’s all the best buttons for long time batman readers. What makes this issue so good is that Snyder and Orlando know the scale of the story and write to that perfectly. This issue isn’t some grand epic, but it tells the story perfectly without over extending itself and feeling thin. There are a number of fun little jokes and scenes that are perfect and will have readers laughing.

The character design of Rossmo is continually fantastic, with each character looks menacing and iconic. As a long time fan of Batman: TAS I seriously appreciate the capeless Batman and it looks great. While not likely, It wouldn’t be surprising for a limited run of Batman/The Shadow statues to be made based on Rossmo’s design.

From a layout stand point, Orlando and Rossmo do a great job at effectively using their panels to convey feeling. The issue opens on a grid of panels that are skewered, much like Batman as he dangles helplessly. Later the panels twist and shrink to convey a character drifting into unconsciousness and it was fun to twist the book around and follow the panels as they shrank to nothingness.

Batman/The Shadow #4 is a solid and satisfying issue with a number of moments to make you laugh, and a few to shock you. This is an issue you must read.