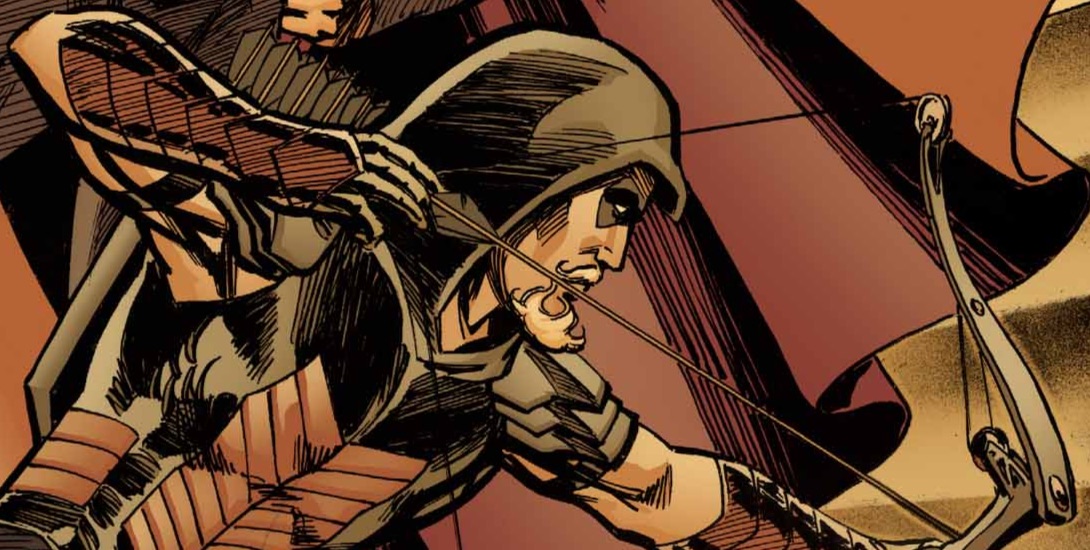 Green Arrow heads to Metropolis to see if Lex Luthor has any connections to the Ninth Circle.

The cover by Otto Schmidt is pretty cool. The image of a large group of people, including Green Arrow, falling to their doom is kind of intense with Superman being the sliver of hope. And while Lex’s facial expression is a little goofy, the characters look great.

Juan Ferreyra’s art and colors are both great. He is obviously very excited about Superman and it’s nice to see Ferreyra get to play with a nice city instead of one that’s always either in constant pouring rain or on fire. Metropolis looks fantastic, especially the view from Lex’s office in which we can clearly see the Daily Planet. Superman himself looks wonderful as well. There’s a Spawn-esque quality to the way Ferreyra draws the cape. It’s constantly billowing and moving around; it works well.

Oliver having to interact with Lex Luthor is always interesting to me because he’s essentially talking to a mirror. Lex represents a lot of what Oliver hates but Ollie shares, or used to share, a lot of those same qualities. With Lex, Oliver is forced to confront a lot of his own personal failures even if he doesn’t realize it. I like that Lex is smart enough to analyze what exactly is going on with Green Arrow right now from about 30 seconds of observation; that’s impressive.

I like watching Superman save people. Stories in the last few years tend to just have Superman punch things. And that can be awesome, but it’s a lot of fun to see him just save people. There’s an optimistic flavor to this issue that is a nice change of pace from Oliver’s recent string of awful luck. I also like that instilling hope in people is what saves the day. It’s on the nose and cheesy but it works. It is unintentionally similar to the season one finale of Supergirl. I know Percy and Ferreyra don’t watch those shows but the similarity is still there.

I don’t really like the way Superman talks to Green Arrow. He pretty much gives the same speech Barry and Diana gave Ollie; he used to be a jerk but now he’s an alright dude. This doesn’t really make sense to me. New 52 Green Arrow didn’t act in a way that would make the entire League hate his guts. I can ignore that; it’s a retcon to make the book more similar to its pre-Flashpoint era. That’s fair enough. What’s really weird is Superman saying these things. This isn’t New 52 Superman; it’s the pre-Flashpoint one. These versions of Superman and Green Arrow have never met. Granted, I am behind on the Superman books and I do know that Mxyzptlk messed with some stuff so that Superman could be Clark Kent again. But Lex wears the Superman symbol on his chest in order to honor the New 52 Superman because he died. So Lex knows they’re not the same person. And Ollie was there in the aftermath of New 52 Superman’s death. I don’t know how this Superman formed an opinion on this Green Arrow; they have never interacted. I guess it could be from observation but that seems a little judgmental for Superman.

It’s a pretty big coincidence that the Ninth Circle has a giant plan for Metropolis right as Green Arrow rolls into town. Unless the Ninth Circle planned it that way, it’s hard to buy, especially because the same thing is more than likely going to happen in Gotham. This would be okay if Oliver were following more clues but he’s somewhat arbitrarily going to these cities and then the Ninth Circle happens to be there.

This is a solid issue. I have my complaints but the issue still works for the most part. Superman is fun and enjoyable and there is some amazing art throughout. The dialogue between Oliver and Lex works and is an interesting dynamic, and the Ninth Circle’s plan for Metropolis is super creepy. I like that Percy works in this relevant issue to the story that grounds it a little but also makes it more unnerving because it’s such a real thing. I recommend reading the issue.