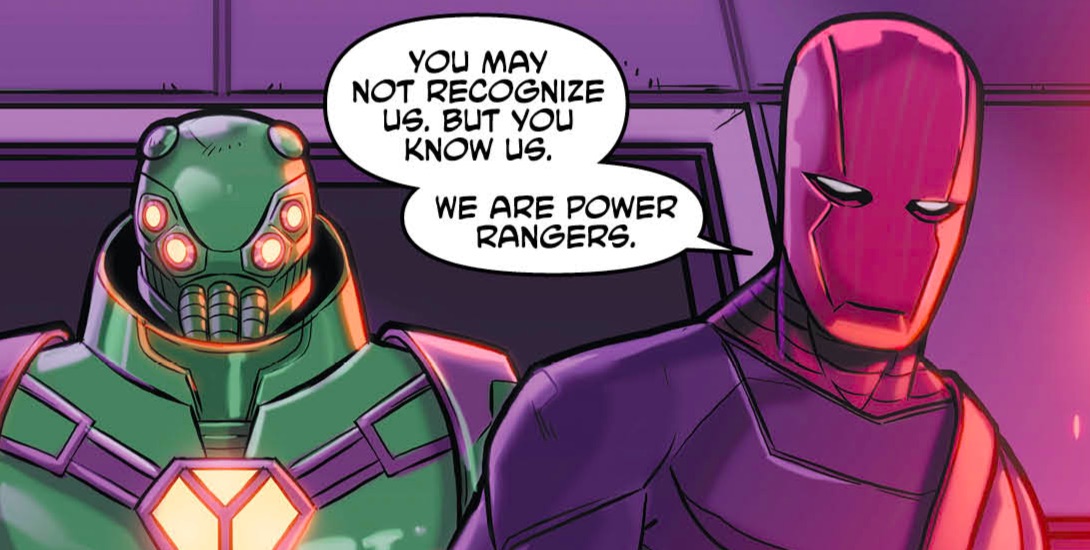 Brainiac and Lord Zedd begin their invasion of the Power Rangers’ Earth while the heroes try to rescue the shrunken Angel Grove and fight the invading forces.

I like the cover by Karl Kerschl. The background is really interesting; I like how colorful it is. The beam of light is separating the parallel Earths makes me think that it’s day in one and night in the other. It’s a nice visual contrast.

Stephen Byrne’s art is gorgeous as usual. I just love his style; the characters all look incredible. They’re expressive and well defined but not too realistic. I especially love his Wonder Woman; I hope he gets to work on that book someday. There’s an animated quality to Byrne’s work that makes it a lot of fun to look at. The colors are bright and vibrant which looks incredible when the color coded Rangers are standing next to the colorful costumed League members.

I like that Alpha 5 gets to play a part in the story. Brainiac wants to keep him, not destroy him, probably because Alpha is another robot. Alpha thinks that maybe Brainiac is lonely and wants companionship, but it could just be that Brainiac is simply interested in the technology. This isn’t just a robot; it’s a robot from a parallel Earth. That has to fascinating to him.

It’s a lot of fun to see Jason, Kimberly and Tommy have to use the tools of DC characters in order to fight the invasion before getting their powers back. And the irony of Tommy wearing Lex Luthor’s gear and Jason wearing Red Hood’s is pretty funny. My favorite is Kimberly kicking ass with Ollie’s bow and arrow. I have an affinity for archers, probably because of Kimberly now that I’m thinking about it, so I always enjoy seeing that weapon used.

No negatives worth mentioning in this issue

This is another great issue. The art is wonderful throughout, which is combined with some great action. It’s a really fun issue with a lot of standout moments both in dialogue and action. I highly recommend reading the issue.