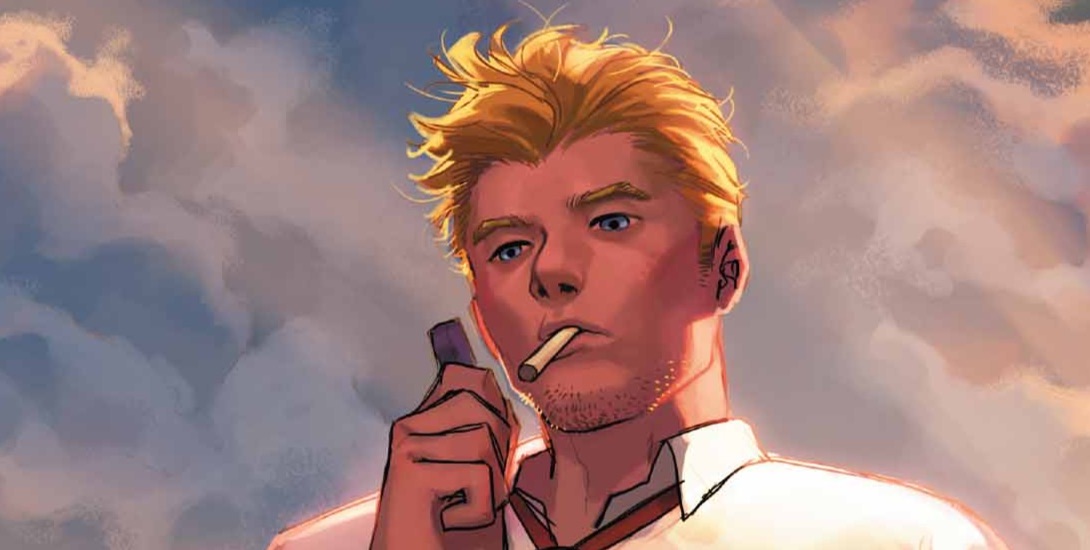 Constantine is questioned by a detective he used to know when someone mysteriously dies in his apartment complex.

I like the cover by Tim Seeley and Chris Sotomayor, It’s a potentially creepy image with a man in bed with a skeleton. But there’s a humorous element because of the bottles, cigarettes and drool. It’s sad, scary and amusing all at the same time which is a good summary of John Constantine.

The interior art is by Jesus Merino with colors by Carrie Strachan. The characters are well defined and expressive. There are some cool moments with the backgrounds which will change color to match a character’s emotions; I like that a lot.

The idea of Constantine being unable to control his powers while inebriated is really interesting. He’s dangerous when sober so I like that this story seems to be examining how dangerous Constantine’s life style is especially for someone in his position.

The issue is a little dull. I like the concept but that’s not revealed until the end. There’s potential but this isn’t a great start. It’s not bad either; it’s just a little dry. The issue mostly consists of Constantine talking to this detective but their relationship is pretty typical in regards to Constantine. They used to be a thing, she was attracted to the danger, he bailed to save her from his darkness and now she resents him. I’ve seen this played out and it doesn’t really interest me anymore.

This is an okay issue. A potentially interesting story is set up and I’m curious to see where that goes. The art is solid and there are some good lines. But it’s fairly slow and a little repetitive. I recommend waiting for the trade.