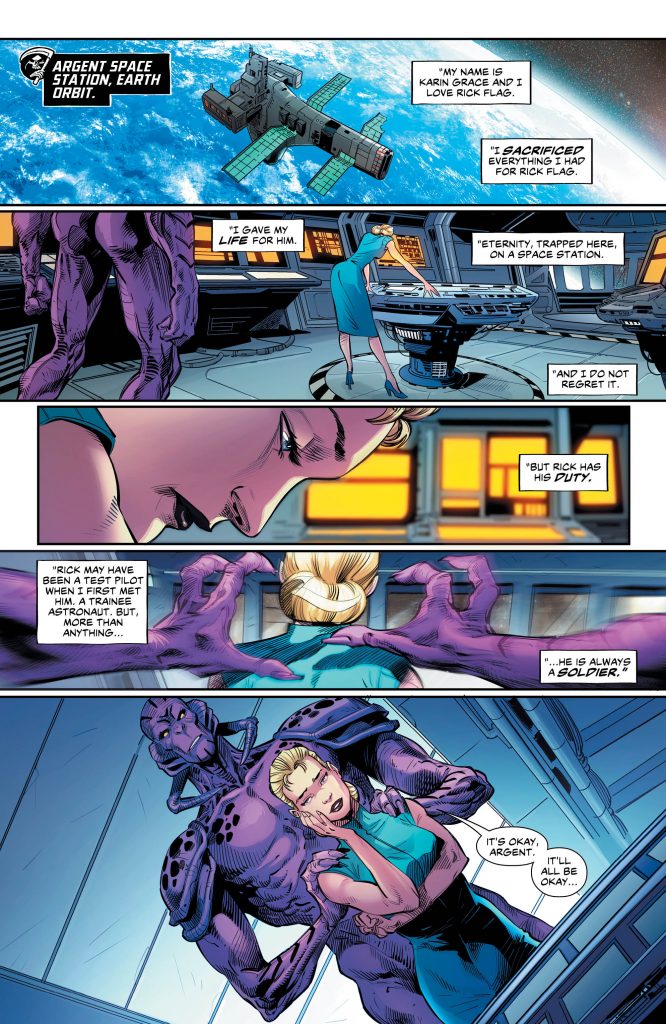 Part Four of the Secret History of Task Force X sees Katana, Killer Croc and Captain Boomerang face off against the monstrous cosmic entity Red Wave and his enslaved helper Rick Flag Senior inside of the moon-base prison designed to contain its parasitic evil. Harley Quinn breaks off from the group to loot through the base’s collection of extra-terrestrial artifacts in search of a weapon to defeat Red Wave, and finds something else entirely. Meanwhile, flying somewhere over the Nevada desert; Waller, Deadshot, Enchantress and Diablo discover a book recovered from the Argent airbase bearing a frantic and bloodied warning, describing the Red Wave’s earth-bound plans as well as his influence over Flag. 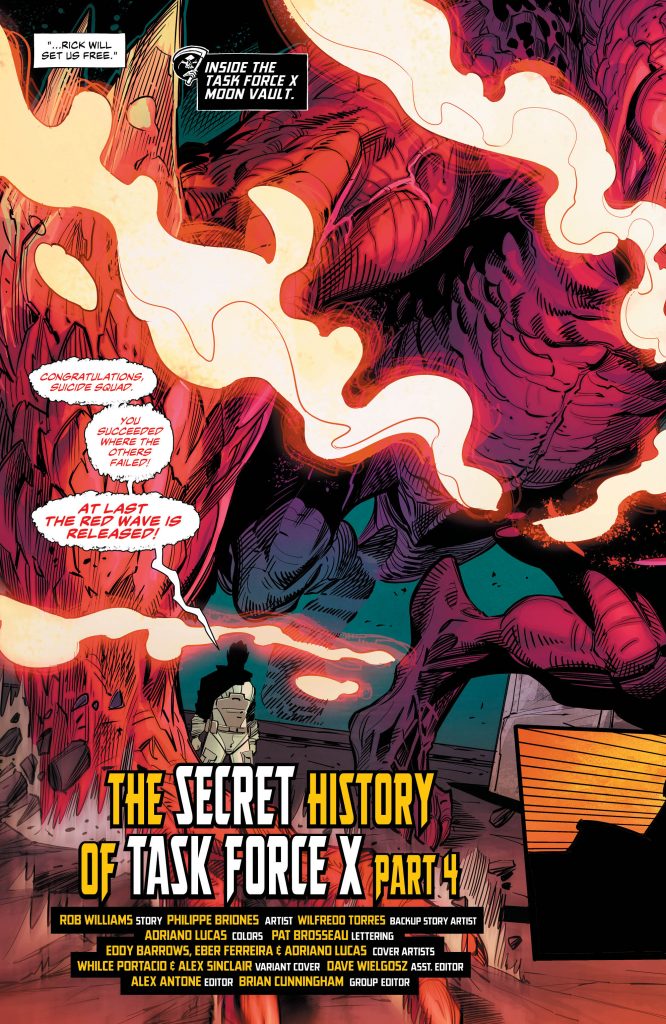 The space-Squad’s showdown with Red Wave gives all present company a moment to shine with; Harley shouts down the hulking monstrosity in the face of Flag’s deception (before getting paralyzed via neck bomb), and recovers later so that she can sneak into the base’s storage area where there are a few great cameos of fan-favourite props and suits (Some not necessarily empty either) before she stumbles on/in to a doorway to the Phantom Realm with unexpected results. It’s a little bit neat and tidy but I would be asking questions if Harley Quinn was on a lunar prison base and didn’t go for a wander around the place to explore and find alien guns. 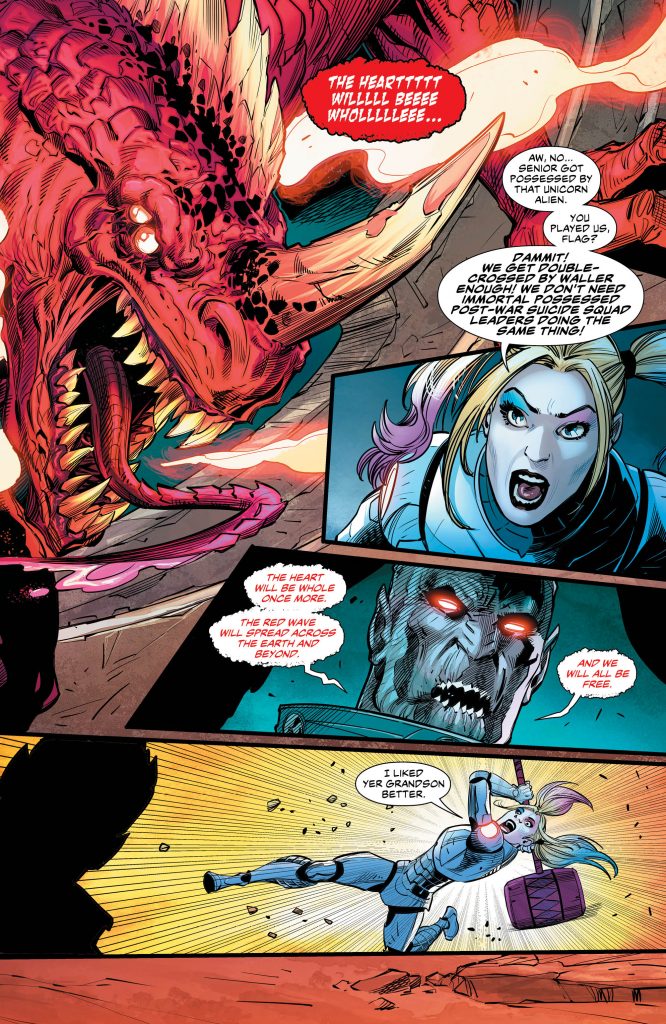 Katana and Croc share a heroic moment together standing against the power of the Red Wave as it attempts to overpower their minds, with Croc taking the brunt of the blast to protect Tatsu. When Croc’s mind is taken by the Red Wave, and Boomerang and Harley have been neck-bombed out of action, Katana makes a truly heroic last stand against the parasite who tells it will free her of her pain. She tells him her pain is her own, and plunges her cursed sword into its chest. The whole sequence is drawn and framed beautifully, and might be my personal favourite badass Katana moment so far. 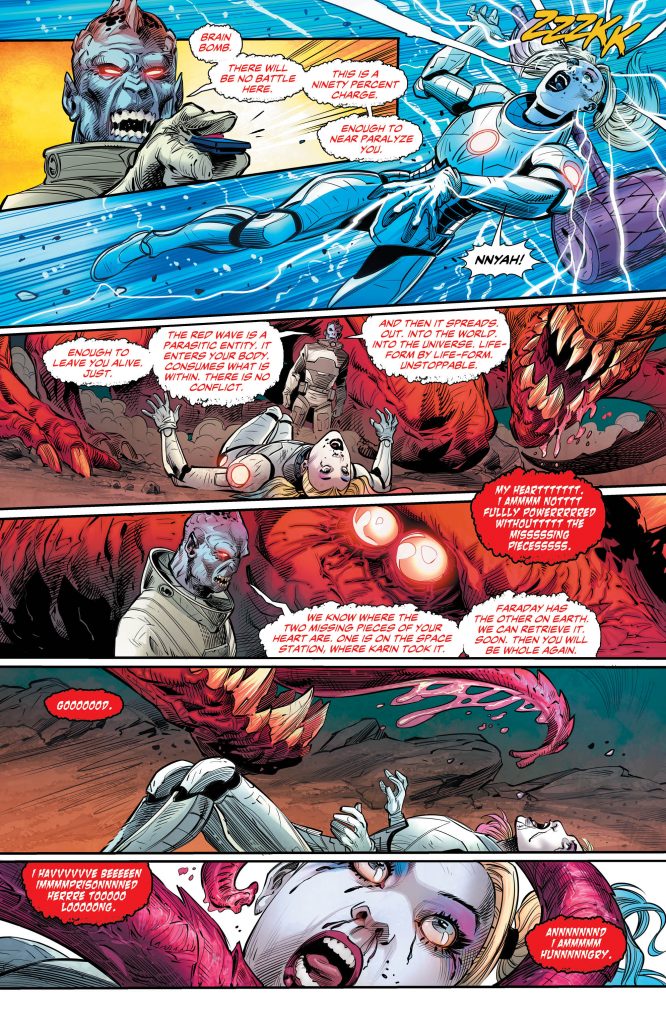 Sadly, it doesn’t quite work out for her because nothing works out for Katana, like ever. She evades Flag and the monster and tries to send out a warning to Karin Grace on the Task Force X space station, the location of a piece of the creature’s heart and its next destination. And again, it doesn’t quite work out for Tatsu, as Karin’s mind has been taken – partially, at least – by the Red Wave too and she is quite aware of its whole plan. Katana tries so dang hard, way more than the rest of the Squad and this is what she gets – poor woman, maybe the sword isn’t the only one that’s cursed. 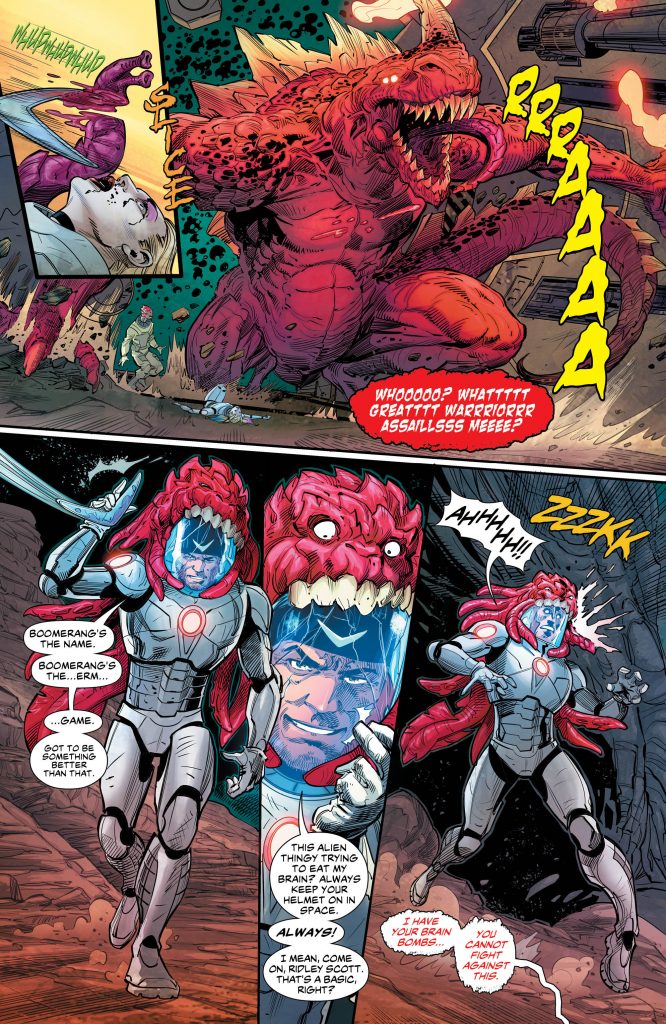 Now that the Red Wave has been freed from his enclosure and we get to see its size and abilities, I wonder if this thing isn’t ridiculously overpowered. Why does the space-Godzilla need mind control, and what was Captain Boomerang ever going to do to stop it? What did Rick Flag senior have in his arsenal to capture the thing in the first place? Also, now that the Red Wave is out of its cage, why is it just wussing out with the neck-bomb paralyzing now? He’s huge and spikey and can shoot lasers from his chest plus mind powers, and he’s electrocuting the Suicide Squad instead of squashing them? Seems a bit restrained to me.

A lot of brilliant moments from the Squad faves, especially Harley and Katana in this issue. Red Wave’s evil plans for Earth are certainly about as drastic as it gets for the Suicide Squad, however this reviewer doesn’t expect it will turn out to be one of the great DC villains any time soon and hopefully issues will expand more on the Argent/Task Force X history in the future.