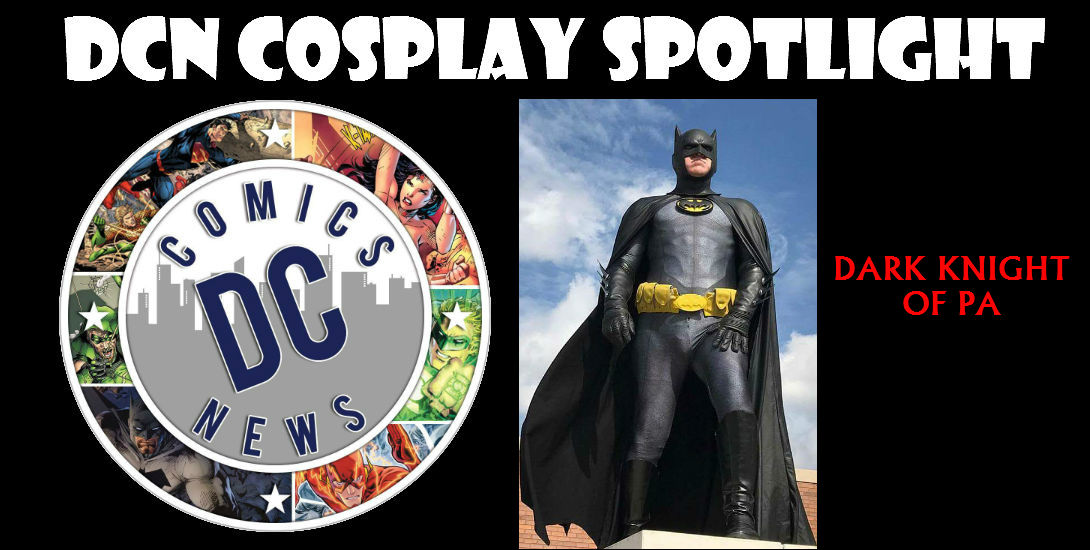 Welcome to the latest edition of DCN Cosplay Spotlight, where we talk to people in the wonderful world of cosplay.  This month we had the pleasure of talking with a member of the DC Cosplayers East and the Philadelphia Avengers, the Dark Knight of PA!

Check out our interview below:

DC COMICS NEWS: Batman is arguably one of the most popular, well-known superheroes to ever exist.  What is it about this character, for you, in particular that made you want to create a cosplay?

DARK KNIGHT OF PA: Batman has always been a part of my life. The first comics I remember seeing when I was a child were Batman comics. The 60’s Batman series and the old Filmation Batman (and other DC characters) were also on TV every day. I was drawn to the character for many reasons; the costume, the absence of superpowers, the gadgets, the Batmobile, etc.

DCN: With Batman being such an iconic character to so many people, do you find there to be a lot of pressure to portray the Dark Knight in a certain way?

DK: I don’t really worry about that. I think everyone has their own vision of what Batman should be. I just show my vision. I have several variations of the Batsuit, and none of them are 100% comics or movie accurate, and that is intentional. Personally, I always prefer the oval emblem over the plain bat on the chest. I also prefer an all black or gray and black suit. Even though the first version of Batman I ever saw was gray and blue, the blue never made sense to me. Have you ever seen a blue bat?

DCN: How long have you been cosplaying?  What was your first ever project?

DK: I was cosplaying before cosplay was a word! My first custom Batsuit was back when I was about 5 years old… many decades ago. My grandfather put it together for me. Back then, Halloween costumes were the old Ben Cooper things. A plastic face mask with a rubber string, and basically a plastic poncho that had an image of the character on it. My grandfather took an old Ideal Batman “helmet”, which was a hard plastic version of the bat cowl that covered my whole head. He painted it black, because even at 5 years old, I insisted that blue had no place on a Batsuit. He made a black bat cape for me by cutting scallops in a large black sheet. He modified black rubber boots to look the Batman boots, and added scallops to black leather cowboy gloves. The bodysuit was dark gray flannel pajamas with an oval bat emblem attached (made from cardboard and glued on). He also got black trunks for me, and somehow made a yellow utility belt from a leather belt and pouches scavenged from somewhere. I wish I still had pictures, but the Polaroids were lost many years ago. Years later, in 1989, I bought all the Morris pieces licensed for the Batman movie, and started customizing. So, I have been constantly modifying Batsuits since 1989 and wearing them for parties, cons, and other events.

DCN: What has been your favorite cosplay project so far?

DK: Costume wise, probably my Batman Inc suits. I really loved that costume in the comics and I wish they kept using it. But, the “New 52” ruined that (among other things). Group project wise, working with DC Cosplayers East to do a Justice League International group for a con and meeting the creators of JLI. We also did a fun photo shoot and got to recreate the “one punch” scene. Most of my favorite pictures are recreations of comic book panels.

DCN: How long did it take you to create this cosplay?

DK: It’s a constant work in progress. Every Batsuit I wear is the result of everything I’ve learned since 1989. I am currently working on some modifications to the newest suit that will probably take a month or two. As soon as that is done, I’ll probably come up with other things I want to change and the process will continue.

DK: I love bringing comics to life. I remember being in first grade and the teacher asked us what we want to be when we grow up. My answer was “Batman”. Now, being around other people wearing superhero costumes is like living a childhood dream and at the same time bringing a smile to others, especially the children who believe they really are meeting Batman.

DK: I can’t pick just one. So many people (both children and adults) have been so excited to get a picture with me, talk to me, or just shake my hand. Seeing the joy in their faces makes all the time and money spent on Batsuits well worth it. I frequently do events at Ontario Street Comics in Philadelphia (the best comic shop in the world, and the comic shop that a scene from ‘Unbreakable’ was filmed in) and there are several families that show up every time I am there. I can look back at pictures from the past few years and see the kids growing up. When I talk to these people each time I see them, they make me feel like I am part of their family.

DCN: You were recently nominated as the “Favorite Philly Celebrity” in an “A-List” competition.  Tell us a little about this experience, how it came about, and what it has meant to you.

DK: That’s a bit of a surprise. It started with Ontario Street Comics, which has been voted the #1 Comic Shop on the list for the past 5 years. I was nominated late in the competition. I think voting began on October 16th and I was nominated a month later. I really didn’t expect to get many votes, but within a week, I was in the lead! Results are hidden now, so I have no idea who will win. I don’t expect to win, I don’t consider myself a celebrity, but it was nice to see so much support from so many people in such a short time. I really appreciate it, and it has encouraged me to get out and do more events.

DCN: Outside of cosplay do you have any other interest/hobbies?

DK: Most are supportive, even if they don’t understand it. My youngest daughter has been Batgirl at many parties and conventions with me. She really does a much better job than I do. She is amazing with kids, and always puts a smile on their faces. She’s a natural!

DK:  1.) I’ve only seen this once or twice, but it really burns me up. If you are in cosplay, and a child wants a picture with you, say YES! I don’t care what else is going on, what panel or photo shoot you are on the way to, take a moment and give that child their wish. You are representing a hero, act like one. Yes, I know this can lead to another child and another pic, and slow you down more, but it’s worth it.

2.) Nitpickers – if someone has the courage to get out in public in a home made, or store bought costume, don’t bring them down. Not everyone has the time, patience, skill, or money to make a “perfect” cosplay. Some people are just starting out and don’t have the experience… encourage them, don’t put them down.

DCN: Do you have any cosplays you will never do? And if so, why?

DK: Never say never, but I doubt I will ever do a cosplay that includes guns. I know there are many characters where guns are a part of the character (Punisher, Deadpool, Deadshot, etc) and I respect those characters and the cosplayers that choose them as a character, but it’s just not for me.

DCN: Why do you think cosplay has become so popular in the last few years?

DK: I think all the comic movies and TV shows that have been so popular for the past several years have called attention to the characters. Social media, and the internet in general have given people easy access to pictures of people cosplaying these characters, online tutorials on how to create cosplays, and access to buy costumes year round. There was a time before the internet when you could only find costumes and supplies in September and October, unless you lived near a costume/theatrical supply store. Before social media, there were message boards where people could exchange ideas and buy/sell/trade costume items. This made things easier, but you still had to know what you were looking for to find the boards, cosplay wasn’t a term at that time.

DCN: Which DC character, if any, may we see next from you?

DK: Flashpoint Batman (without guns)? Yellow or Green Lantern Batman? Or maybe Green Arrow… since he is the CW’s Batman. 🙂 I also keep kicking around a couple Marvel characters (Moon Knight and Captain America) so maybe somewhere down the line I will do those, but they just don’t call to me like the bat does.

I’d like to give a special thanks to the Dark Knight of PA for taking the time to talk with us.  I’d also like to thank Ontario Street Comics for helping make this interview happen.

Be sure to check out Dark Knight of PA’s Facebook page as well as Ontario Street Comics!