“This is a story about super-villains…so don’t expect any happy endings.”

A Phantom Zone tidal wave tearing through the moon, a magically/cosmically possessed former head of Argus, a gigantic red space monster loosely tethered to a space station on a collision course with the Sun – and one ragtag group of self-loathing criminals to save all of Earth. “The End of Task Force X” has come in the final issue of this Suicide Squad arc. 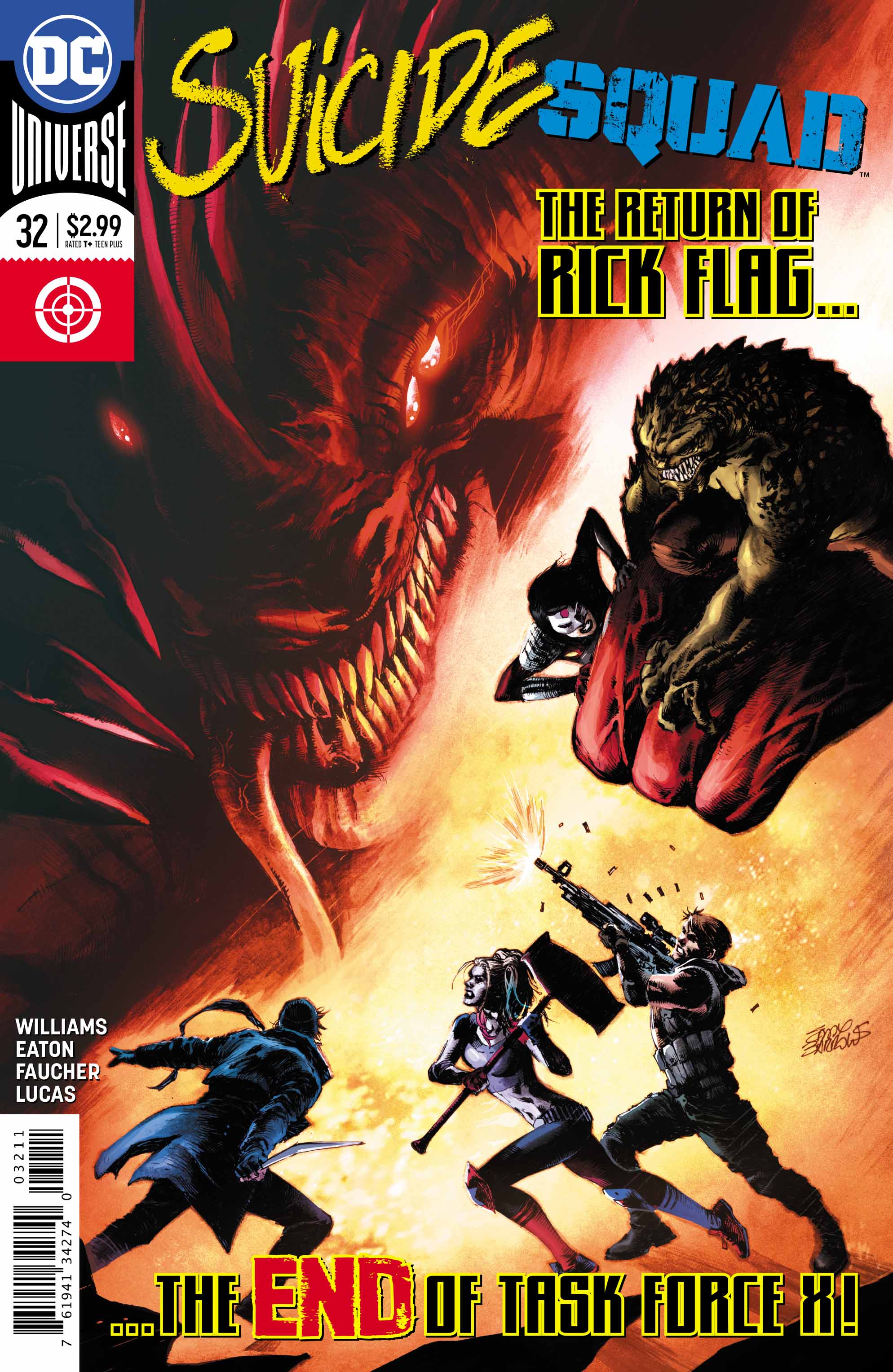 This book climaxes with a stellar showdown on the hull of the Argus Space Station, between the tall and terrible Red Wave Monster and Harley Quinn, Killer Croc, Captain Boomerang and Katana (under threat of exploding heads by the newly recovered Rick Flag, who stays to drive the shuttle and not get burnt to a crisp by the Sun). In this action-packed and emotional sequence, Rick Flag comes back into the fold, wasting no time before reasserting himself as the Squad’s leading asshole.

Reminding his team of their expendable nature, he chucks them out of the safety of the ship to fight psychic Godzilla, under the glare of extreme solar radiation, so that he can fulfill his grandfather’s dying wish and save Karin Grace. Flag meant well I’m sure, but the tension within the team is palpable as the finale issue highlights the unchanging disregard Waller, Flag and their predecessors hold towards the criminal ranks of the Suicide Squad.

Even the former Squad/Argus members are treated with contempt; Karin Grace and Faraday King are imprisoned with the rest of the Suicide Squad in Belle Reve prison by Amanda Waller, to contain indefinitely any further potential Red Wave infection, as both infected hosts continued to survive after Red Wave’s death. Not only a harsh gesture to throw at former staff, but also highlighted as disrespectful of Rick Flag Senior’s final wishes – something Rick Flag junior doesn’t seem to oppose at all, further adding to the complicated emotional subtext at work within this book.

You might even draw parallels between Rick Flag (junior) and Karin Grace, and their doomed relationships with Harley Quinn and Faraday King. Two loyal, dutiful agents for Task Force X who will always prioritize the mission over the soldiers being let go by two damaged, passionate anti-heroes because their tender feelings could never match their harsh realities.

Only a couple of irks from this issue.

Firstly, although it gave some very cool dialogue to Katana while as flawlessly executed her extra-terrestrial execution, I do feel like it was a bit overkill and that’s considering the nature of psychic Godzilla when said. Red Wave was quite literally toast, they were flying into the Sun. Was a toothpick-sized stab wound really going to make that much of a difference? Killer Croc could have been saved a lot of pain if they had just grabbed Karin and flew back to Earth, but I admit that way loses some of the drama.

Secondly, after having a few issues without much input from Deadshot or Diablo during the other half of the Squad’s Earth-bound adventures, I was quite disappointed that they remained background scenery for the finale issue as well. The story wasn’t particularly set around them at all to be fair, but they were supposed to be present in some sense and it was disappointing we didn’t get an ounce of attitude or a single pun out of them before the arc came to an end.

“The End of Task Force-X” is a rollercoaster, both in the emotional sense and also just generally.  Tensions within the team and emotional subtext beneath the bloodshed add something special to the last battle with the very big bad, Red Wave. Ending on the familiar themes of mistrust, contempt and vitriol between Waller, Flag and the Squad, the book reminds us of exactly who these characters are, to explain why not to expect happy endings for these “super-villains”.