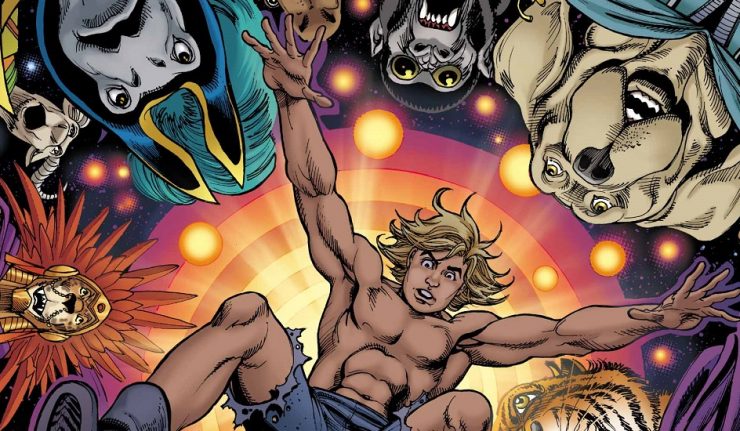 (Epilogue the First: The Answers)

“Hope you had fun on this crazy Kamandi Challenge. This is comics at its best, breaking rules and having fun – and you’re the ones we do it for.”

In this final issue of The Kamandi Challenge, our long-suffering hero plunges into the heart of the jungle with his new gorilla family, all skydiving from the wreckage of last month’s battling spaceships. Once back on solid ground, Kamandi befriends a troop of guerrilla warrior rats and their prophetic leader Gnawbit the Clever, who provides Kamandi with a cosmic, Kurt Vonnegut’s ‘Breakfast of Champions’ style conclusion to this series in tribute of Jack Kirby.

This book begins by playing on the episodic nature of the series (and why not, if it’s the last chance to do so) by giving the story a false start and lulling us into a sense of tranquillity before throwing us right back into the action, hurtling towards the Earth from dizzying heights below the fires of an exploding space station. A key element of this whole series has been the way the story has continually pushed us out of short-lived comfort zones and into madcap chaotic sequences filled with adrenaline and sheer joy, for the most part. This issue ‘The Boundless Realm’, absolutely capitalizes on that precedent by taking Kamandi into a more reality-bending, inter-dimensional space – which is really the only place to go after you’ve been to space, I suppose.

This series has introduced us to some wonderful characters along the way, and sadly most of those characters either split paths from Kamandi, or died. It’s the nature of this story, to move forward no matter what but dammit I miss some of the people we’ve left behind along the way. I was, therefore, overjoyed to see so many familiar faces return to the page while Kamandi summons the leaders of the world to an ambitious, also magical peace summit.

Kamandi gets the chance to feel what it’s like to lead a great legion, and embrace the power of a true leader that’s remained dormant within him this whole time. Giving Kamandi the opportunity to reflect on his experiences rather than just survive them and carry on to the next provides heart and substance to the end of Kamandi’s arc.

The ending/epilogue of this issue is a 4th wall-breaking wonder, as the series’ protagonist finally reaches the end of his long journey and meets his maker; Jack Kirby. Describing himself as a D’Jinn, genie and genius, Mr. Kirby reaches out to Kamandi to offer three wishes, as consolation for all the torments he endured for our entertainment. Kamandi was always Kamandi’s true father, and this series has been a tribute to the legendary creator, and surely ending this series with the appearance of the man himself as an omnipotent, chaotic Godform is the only way to end such a wonderful tribute. In its final pages, The Kamandi Challenge sends off one last, big thank you to the creator who gave us this and so many other wonderful characters and stories.

I have no negative remarks to make about this issue, especially not about Bobo the Detective Chimp.

This is a playful, heart-filled and satisfying conclusion to the chaotic adventure that Jack Kirby began over four decades ago. The story itself ends in a glowing tribute to Kirby as the enigmatic, limitless creator of so very many beloved characters, and it finally gives the well-deserved happy ending to Kirby’s young hero; Kamandi, The Last Boy on Earth.