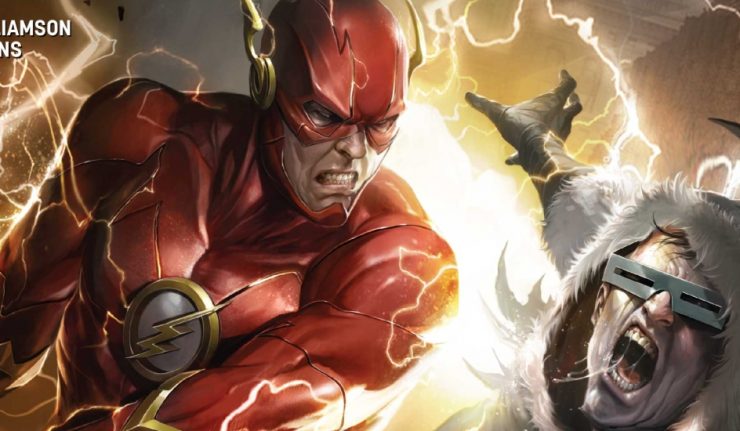 “A Cold Day in Hell” finale! The Flash and an unlikely ally must discover who is behind the death of one of the Rogues before the murderer strikes again! But Flash is trapped inside of Iron Heights with one person blocking his exit: Captain Cold!

Although Barry is one of the heroes that embodies hope and optimism, for the last several months, he has struggled with negativity, both literally in the form of the negative speed force, but also metaphorically in his relationships with his supporting cast. But this issue seems to mark the turning point where Barry is going to start putting his life back together.

First off, he finally gets to the bottom of the Rogues’ scheme at Iron Heights, and shuts down the crime syndicate they are running out of Iron Heights. He even manages win some of the credit for himself as Barry.

And surprisingly, August Heart (Godspeed) helps Barry defeat the Rogues, but also helps Barry to make the decision to give himself a second chance to get his life back on track.

And speaking of August, it certainly seems like he is now seeking redemption. But is his turnaround heartfelt, or does he just want Barry to think so. Will Godspeed ultimately be an ally of the Flash, or a foe?

We also see Captain Cold being separated from the rest of the Rogues by being moved to Belle Reve. Unfortunately, we don’t get to see his reunion with erstwhile Rogue Captain Boomerang, but perhaps we’ll get to see that encounter in Suicide Squad.

Finally, most importantly, Barry relates his resolution to improve to Iris, and asks for her forgiveness. Finally, after a long separation, Barry is facing Iris and attempting to mend their relationship. I believe that Barry and Iris’ marriage will be a symbol that the damage done to the DCU by Flashpoint and the New 52 will finally have been fully repaired and hope will have triumphed over despair.

There’s very little of the negative in this issue, which is appropriate for Barry’s renewed optimism, but it is slightly annoying that when Barry asks for Iris’ forgiveness, we don’t get to see her response. Presumably, she should willing to forgive Barry and get back together with him, as she wanted to do so during the Dark Nights: Metal tie-in a few issues ago. However, we cannot totally rule out a change of mind in the meantime, and I will feel better once they are officially back together again.

It’s unlikely that Barry’s life will be smooth sailing from here on, but Barry has finally taken the first concrete steps towards becoming once again the shining exemplar of hope and optimism in the DCU. It’s issues like this that make The Flash one of the best titles of DC’s lineup.