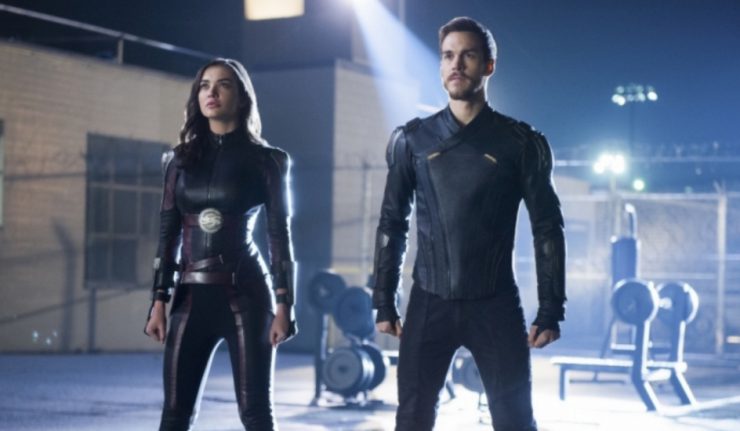 Supergirl’s fight with Reign has put her in a coma, so the D.E.O. takes on the evil Kryptonian by themselves while Mon-El and his Legion of Superheroes teammates try to wake Kara up.

My concerns about Reign not being an interesting villain from the mid-season finale turned out to be premature. This episode makes it clear what her motivation is, and I like it a lot. Reign, in her own twisted way, thinks she is helping the world. She is trying to eradicate sin, especially crime. What’s most interesting is that she considers apathy to be the greatest sin. From Reign’s point of view, the world is too soft on criminals and too willing to look the other way. That’s actually a compelling villain and feels timely.

Part of the episode takes place in Kara’s subconscious as Brainiac 5 attempts to wake her up. These scenes are really strong. It’s nice to have such a character focused episode for Kara, and Melissa Benoist is great as always. I really love the story about Streaky; there is something very natural and relatable about Kara’s childhood friendship with her cat. It’s very sweet.

Continuing from the mid-season finale, there is still a great power balance between the two sides. Reign is obviously very powerful and could easily win fights, but our heroes are also strong and can take her on. When the D.E.O. fought Reign, I legitimately thought either side could win. This is one of the most engaging hero-villain conflicts in live action superhero fiction right now. And both sides are going to have to up their game and get better to try and beat the other.

The Legion costumes are so boring. I understand that they’re probably going for a militaristic uniform but they look dull and outdated. They remind me of the X-Men movie costumes. And those look better than this. Saturn Girl’s is definitely the best, but I think all three outfits are uninspired.

James and Lena have a fairly dull and obnoxious subplot. My main complaint with the relationship between Kara and Mon-El in season two was that they never really got to be a couple. The writers teased it forever and once it finally happened, the two just bickered. Every episode felt like they were going to break up. It was such a tedious story and I’m worried that they’re going to do the same with James and Lena for the sake of easy drama. The two go backwards in this episode only to end in the same place that they were at the end of the mid-season finale. It’s boring and unfair to these two great characters and actors.

I think this is a great episode. The action is great with a compelling and powerful villain fighting smart and strong heroes. There is actually a conflict, which sounds weird to compliment because it should be obvious, but most live action superhero movies and TV shows lack this element. There are a lot of great character moments with Kara that are genuine and touching. This season has been a major highlight for the CW superhero lineup and I’m really happy that they’re still keeping this momentum up.