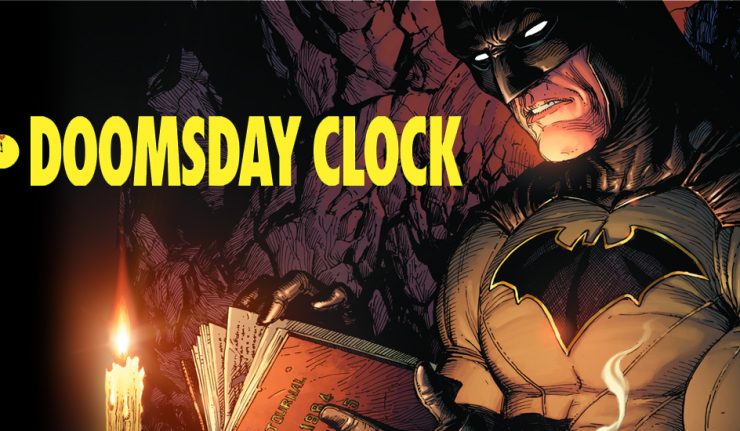 To Veidt’s surprise, Edward Blake aka The Comedian has re-appeared after being presumed dead. Veidt himself was the one that attempted to murder the Comedian leading Veidt to realize Doctor Manhattan must have saved him. Comedian shoots Lex Luthor and attacks Veidt. Veidt takes drastic measures in order to escape.

Batman and Rorschach finally meet one another within the batcave. As always, Batman is cautious with the mysterious new stranger. Knowing it’s the best way to explain everything, Rorschach hands Batman Kovacs’ original journal.

Marionette and The Mime explore Gotham City and find themselves in a den of Joker’s thugs and become very interested in meeting the clown prince of crime himself.

Gary Frank and Geoff Johns once again show they make a fantastic creative team. Frank’s moody and expressive art compliments Johns writing perfectly in this series and I can’t imagine another artist working on this book.

We get to see how the Comedian survived, which still gives me hope we see Kovacs at some point. But knowing that Veidt attempted to kill him, Comedian obviously has it out for Veidt which makes for some great tension.

Batman’s reaction and interaction to Rorschach throughout the book is worth the price of the book alone.  And the potential meeting between Marionette and Mime (whom I see as instant classic characters) with the Joker makes me very excited for the next issue.

In the original Watchmen, the side story “Tales of the Black Freighter” was a comic book story that young Bernard read that’s narrative mirrored the primary story. Though it’s not necessarily a negative or a positive yet, Geoff Johns has chosen a black and white film called “The Adjournment” to do the same thing in Doomsday Clock. As of now it is too early to tell if it will play out as well as the Black Freighter did, but the idea of it being an old black and white film is clever.

But the best thing about this issue is we finally get a little backstory to the new Rorschach. It’s brief but it already says a lot about the character.

I am starting to like the new Rorschach, but I still think the appeal and potential of Rorschach meeting Batman won’t be met until it’s Kovacs himself. Hopefully by the end of this series we will see the return of Kovacs as Rorschach and Reggie take up a new moniker.

The overall story begins to take shape in this issue as we get more backstory as to what happened in the time between the end of Watchmen and the beginning of Doomsday Clock. The interactions between the characters of both universes are done really well and seems as if they have always been meant to coexist.

I am really enjoying this title so far and I not only wait anxiously for the next issue, but I dread the end with only 9 issues left.