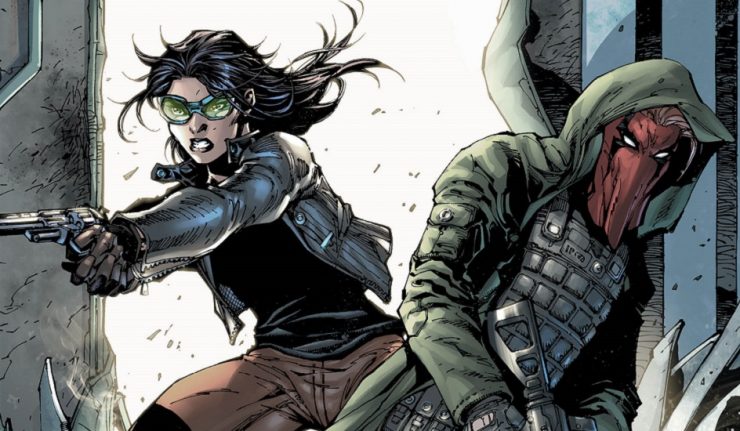 In all honesty this series is becoming so complex that short paragraph summaries of each issue are becoming more and more challenging. With so many characters it’s almost impossible to briefly detail what happens here. What can be surmised is the tension pervading the issue. From start to finish (excluding a brief interlude) this issue builds in order to keep readers engaged. Building to what I’m not quite sure.

I’ll explain this slightly better in the negatives section, but the entire issue has a strong sense of building towards something. Despite how generally lost I am throughout, I can’t help but keep reading and I’m sure other readers will react similarly. Warren Ellis is a genuine master of the craft and I’d argue he’s one of few that could captivate readers so well with such a complex story. If you imagined the plot of the Wild Storm as threads on a board connecting characters you wouldn’t be able to see the board for thread. And yet I’m still engaged.

Partly this is due to Davis-Hunt’s artwork which is as fantastic as ever. As per usual he’s given enough to play with to make the issue interesting to look at but there is a fair balance between breath-taking splash page, and seven panels of dialogue.

One scene in particular stands out in this issue, the 70s sequence. Henry describes an attack that took place back in the 70s which is told with minimal dialogue in favour of Davis-Hunt’s amazing rendering. Told in black and white, the goofy silver age style UFOs of Skywatch wreak havoc on a research facility owned by IO. The silliness of the UFO spaceships feels completely natural and the action is gripping. It helps that violence isn’t held back at all. In essence it’s an important plot point as well as an excuse for Davis-Hunt to go daft so all in all it’s a great sequence.

It’s hard to pinpoint exactly what I dislike about the issue. Given the numbering on the cover I wonder if Ellis just has to drag the story out to reach the conclusion. As said, there’s a very real sense that the issue is going somewhere, it just never gets there. Given the promise of so many more issues, and the feeling of tension throughout each issue, I can’t help but wonder how much longer readers are willing to wait until something serious happens. I can’t remember the last time a major plot point occurred. Each issue feels like opening chapter to a book that’ll never finish.

It’s a commandment to Ellis and Davis-Hunt really, that they can make such a book entertaining but I have to question for how long will the flashy lines of Davis-Hunt and gripping sequences of Ellis distract me from the fact I have no idea what’s happening month to month.

Another concern I have is the number of characters. It’s an ambitious task to rebrand the entire Wildstorm universe into one series and it’s showing. As someone who never read any original Wildstorm books, this is becoming tedious. Luckily most characters are distinct enough that I can remember them by looks but names are a true test. On a good day I can name maybe three characters per issue and each issue seems to introduce a new character.

In all this is another ok issue that lacks anything major. If you follow the series then you need this issue to continue the story. If you’re jumping on here then good luck. Ellis and Davis-Hunt are constructing an incredibly complex story that while it is pretty to look at, is becoming increasingly harder to follow.