This book is just different.

Casey and Terry Noone have apparently conceived a child due to the consumption of $#!+. Yeah, figure that out!  Coupled with the fact that Lucius is part of Dada/Nada, nothing really seems to make sense.  So, Cliff, Crazy Jane, Larry and The Chief are trying to make sense of it. 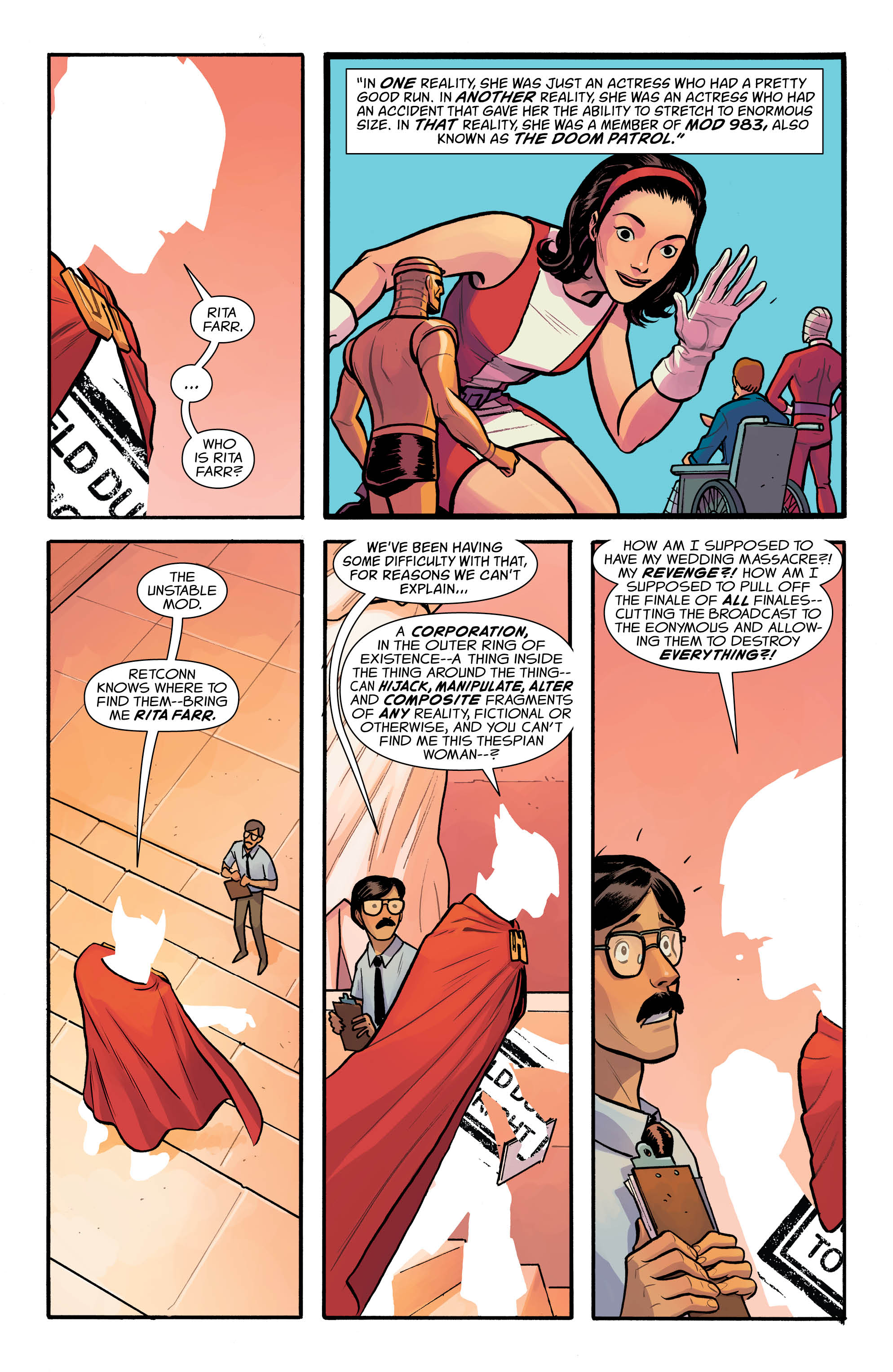 And in an alternate dimension, that is informed by comic books, there’s some serious trouble as some retconning seems to be going on.    Amazingly, this provides the re-introduction of Rita Farr.

The team eventually track down the Brotherhood of Nada (formerly Dada) and are able to get things under control with some help from Lucius who turns sides after he parents arrive. 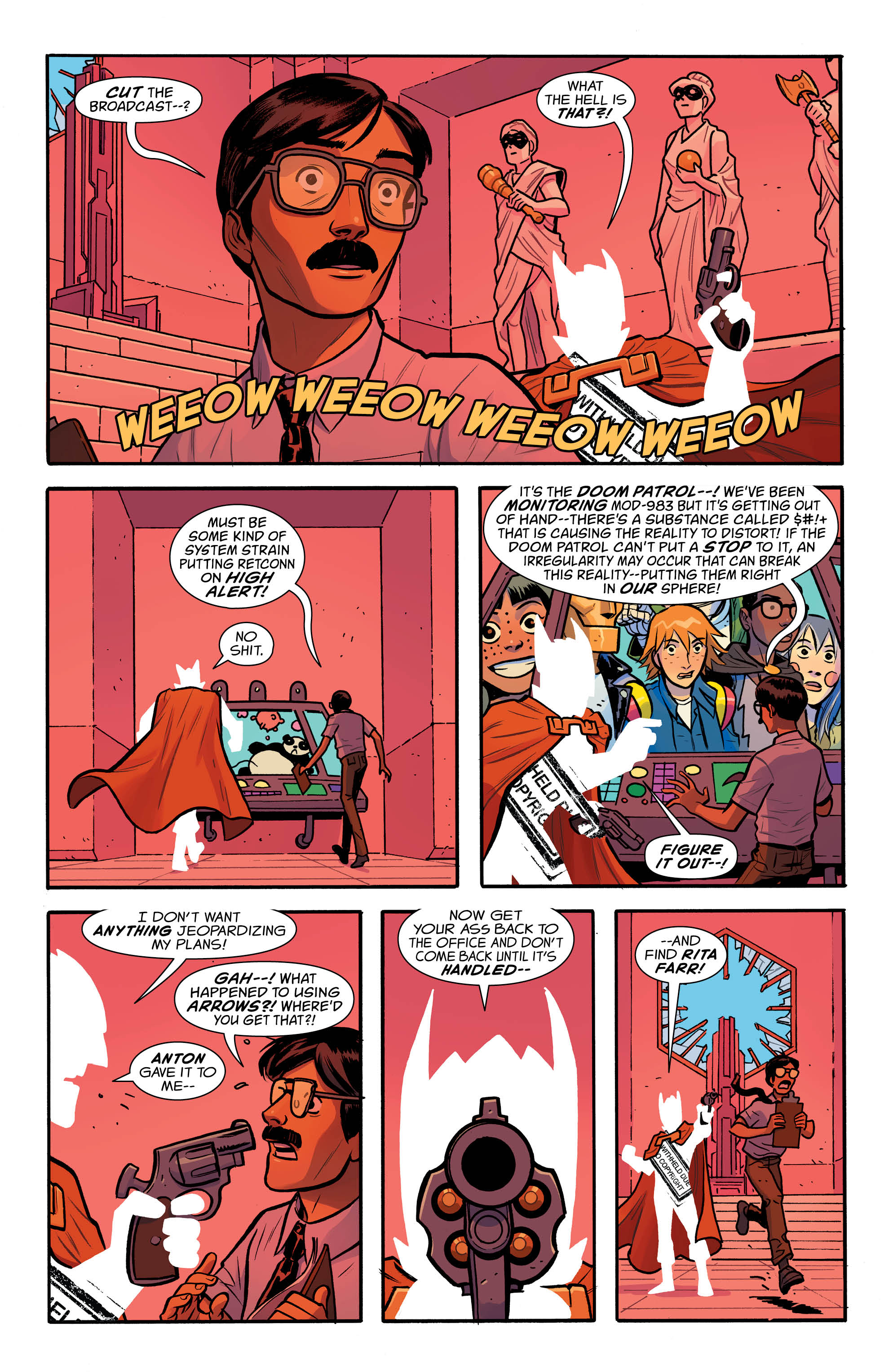 Afterwards, Casey finds Terry and it appears it’s time for the baby to come.  Danny (in ambulance form) rushes her to the hospital with the rest of the cast following in various modes of transportation.  Now, in that retconning dimension the birth of this child seems to be what they needed….

The retconners commence a retconn which blanks out the pages which Danny ends up crashing through and arrives someplace else entirely. 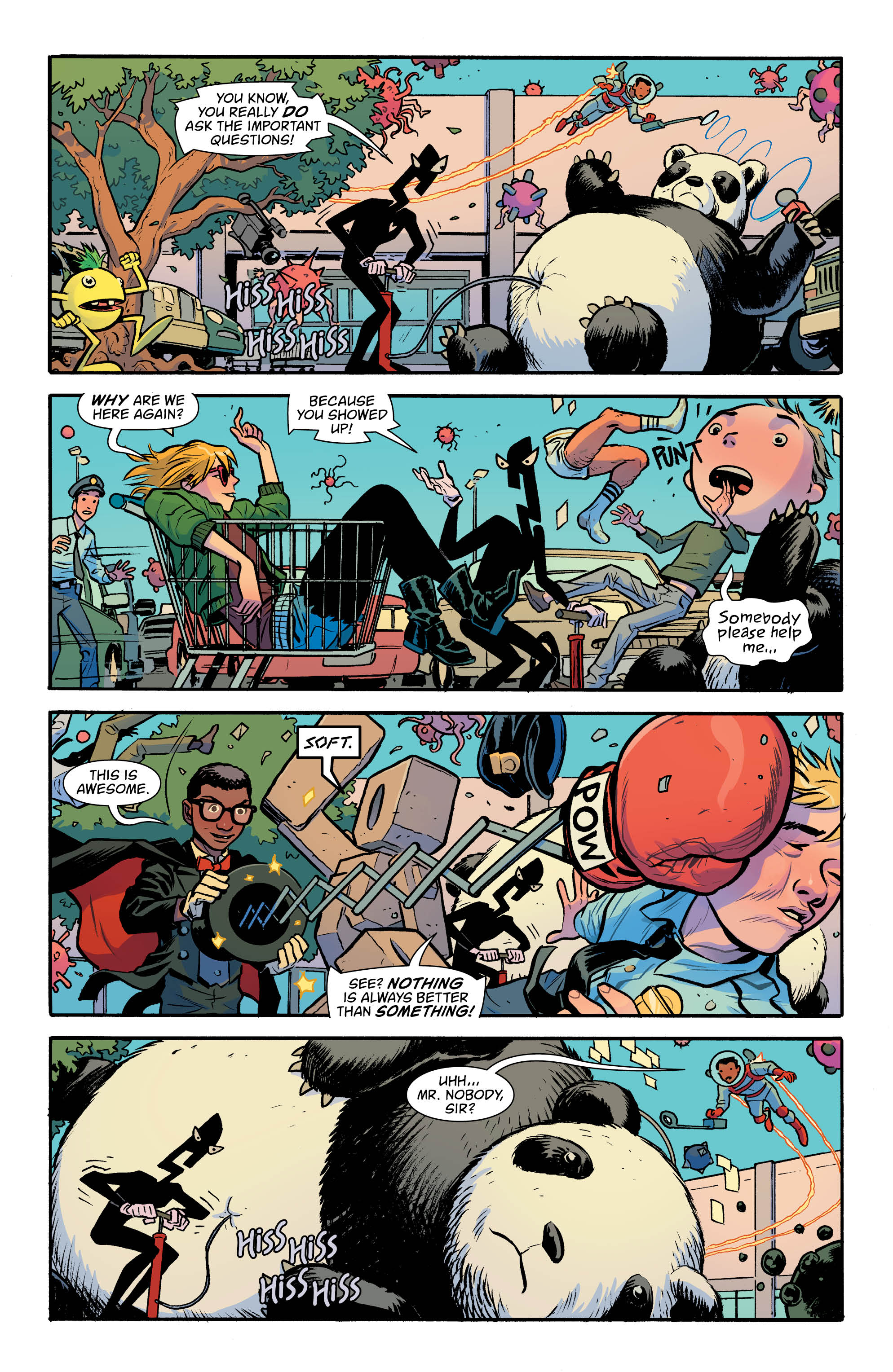 Despite the disjointed nature of this book, it is really enjoyable.  This aspect allows the reader to experience the narrative in a different way.  It relies on the connections between the characters.  This issues delivers hard on the characterization.  The moment between Lucius and his parents is quite touching as well, as it delivers very accessible emotional content that everyone can understand. 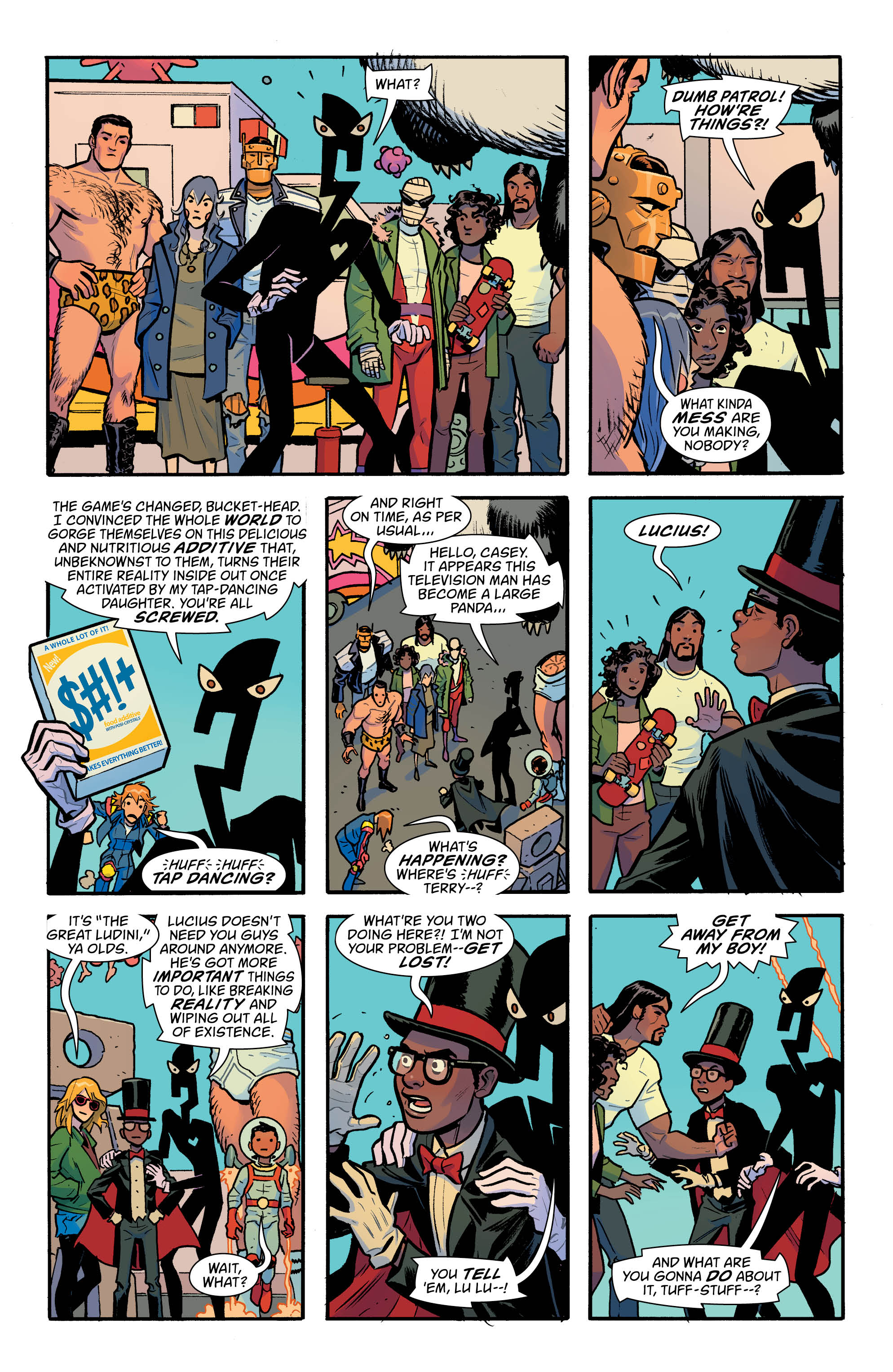 There’s a really neat metatexual aspect to this title as it addresses retconning.

It should be clear that the biggest negative with this title is the frequency of publication.  It’s really interesting to consider that what’s going on in the book is innovative and intriguing, but the narrative suffers from the publishing gaps.  It’s a challenging book at time anyways, but the delays from issue to issue hurt the title. 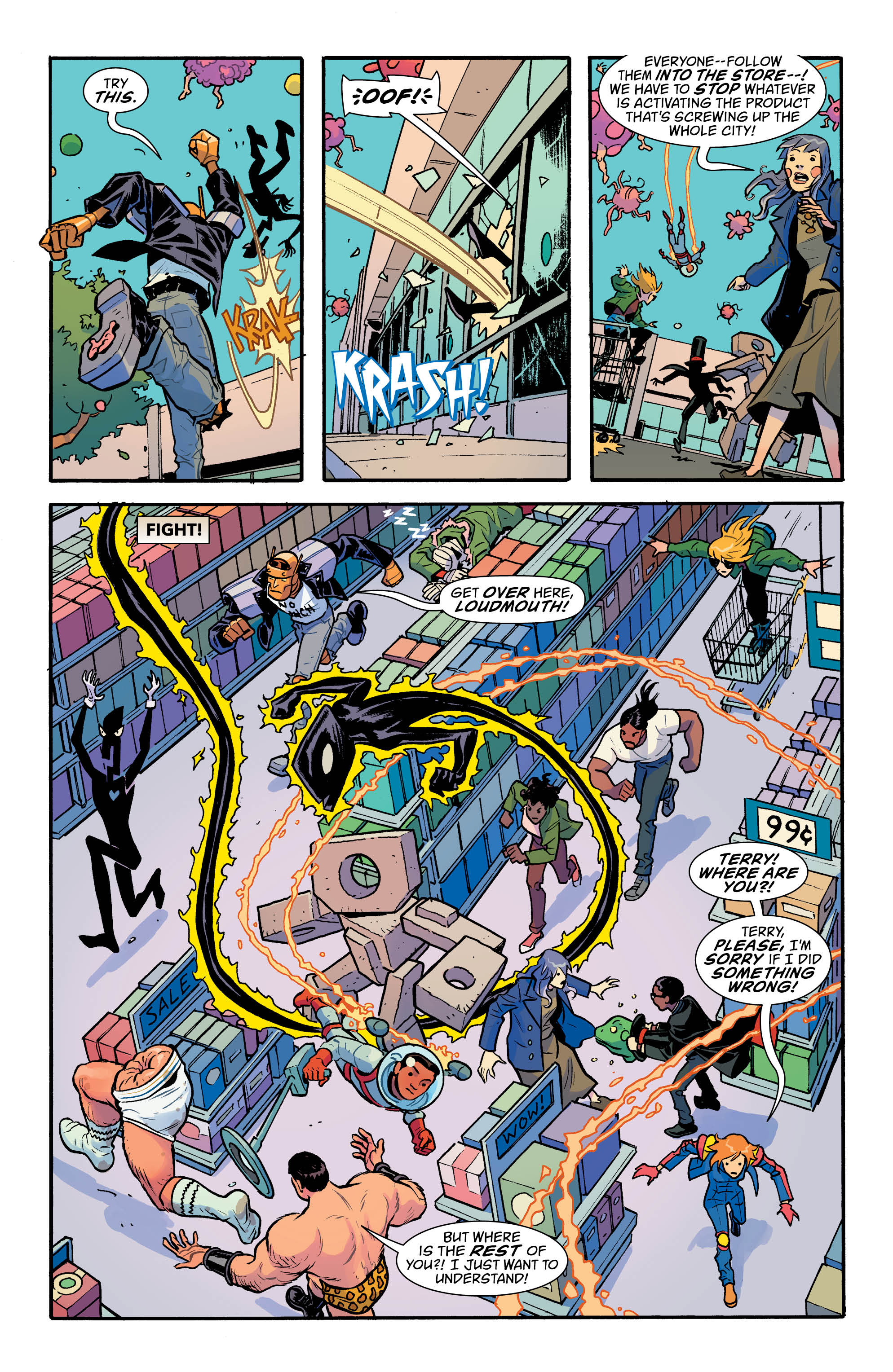 This book continues to be wacky and fun.  It’s unique narrative style entertains and challenges the reader from numerous angles.  The only drawback is the erratic publishing schedule.  You never know what’s going to happen next.  Not many books are able to pull this off consistently.