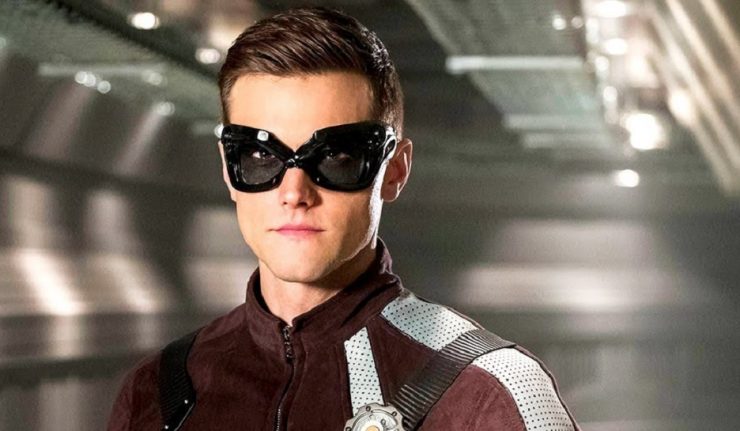 As Barry adjusts to prison life, Axel Walker aka The Trickster resurfaces and forces Ralph to overcome his self-doubt and step up as The Elongated Man.

What I felt worked the most this episode is the mutual coming of age motif shared between protagonist and antagonist. On the protagonist’s side, after months of watching Ralph inch his way towards becoming a hero in his own right, the audience got to see that happen but still retain his character flaws. Devoted fans of season one will see a parallel between Barry’s cocky streak when he first began his career and Ralph’s inflated ego; both are gifted with incredible physical abilities that superficially look untouchable. And, like Barry, Ralph learns the hard way about knowing his limits when Trickster’s attack manages to hurt his malleable skin.

Sawyer again pulls off the conveyance of a man experiencing a dose of humility and forced to push past his personal limitations when the crisis gets worse. The conversation with Barry in the cell works in that you sense Barry’s wisdom and experience as he encourages his trainee to rise to the challenge. While I was hoping for Barry to use an example of his early days as a springboard towards his point, it works. And thankfully, we get to at last see the standard Elongated Man’s costume and discarding of the eyesore he’s been wearing since October. The goggle-like mask works in the idea that if they ever bring in Plastic Man in future stories, the similarity in looks and powers can be used as a rivalry plot. The uniform inhabits the purple-white balance of his second costume in the comics without looking absurd. Like Barry’s first costume, the colors are muted so he can blend into the background easier. What also works is that although Ralph saves the day, his personality flaws remain i.e. “Do you like shrimp?” Plus the fact he hates his name is another parallel to Barry.

Now on to the antagonist’s journey. The return of Axel Walker as The Trickster. With Mark Hamill riding the wave of The Force in theaters these days, who better to fill in the shoes than Devon Graye. While a departure from the comics with the validation of James’s claim that he was his father, it gives Walker a chip on his shoulder. It’s another brilliant nostalgic nod on the execs’ part to bring back Corine Bohrer from the 1990’s CBS series and solidify the character of Zoey Clark aka Prank as Axel’s mother.  Seeing her flip from a mother wanting to keep her son out of jail to partner in crime via lack of medication makes you shake your head and go “wow” as this looks both zany and like a midlife crisis.

I remember watching that episode when I was a kid, and I find it cool how they pulled a Harley Quinn and gave this one-shot character relevance in the present. The use of promotional photos from the series was a great gag and a similar wisecrack Cisco made in season one. We’ve already seen Walker wreak havoc as The Trickster, but this time his path parallels Ralph’s in that he wants to make a name for himself and replace his father. Seeing Axel actually create an acid that could potentially kill Ralph shows off his ingenuity and legitimizes him as a threat. The dynamic between these two works; they’re both B-listers trying to make it to the A-list, yet are too clueless to make that happen.

Of course, we can’t go without mentioning Barry’s new life behind bars. Naturally, being a former CSI and a cop’s foster son puts an instant target on his back, but it’s not played up as a cliché. The allowance of Gustin to grow a beard shows a bit of depression in Barry’s demeanor, despite his otherwise optimistic attitude with Iris. The moment with Iris and the glass and how they bookended it at the end was a nice nod to the pilot’s moment between Barry and his dad.

Given that it’s Iron Heights and it’s evolved in its metahuman containment methods, the subtle glimpses of security cameras convey the sense that Barry’s life is under a tight microscope. As mentioned earlier, the scene with Ralph shows how much he has grown in experience and wisdom. He knows there is no real way to phase out of Iron Heights and be back in time before he’s discovered. The subplot involving Big Sir is a nice nod to the comics; in the original version of “The Trial Of The Flash,” there was indeed a character with the same moniker, but with a different civilian identity and near-childlike mentality.

While a departure, it was smart to revamp “David’s” origin a little and establish a connection to Barry’s father. Bill Goldberg, best known for his bombastic in-ring persona as a professional wrestler – WHO’S NEXT?! – is subdued and shows a little more accessibility than Danny Trejo a few months ago. It will be interesting to see where his story goes in the next episode.

Aside from it being a filler episode, despite the character development in that of Ralph, I think the biggest complaints I have this week have to do with plot holes and jokes that are wearing thin. In season one’s introduction to Axel Walker, James Jesse claims he tracked him down and groomed him to be his replacement because he’s his illegitimate son. And yet, the scenes with Zoey suggest that Axel was the neglected child waiting for Dad to come home and watched his antics on television. Sometimes I wish the writers would consult previous scripts before making blunders like this. Then there is the Killer Frost gag. Apparently, Cisco and Harry have set up a system to coax Killer Frost out of hiding inside Caitlin by getting her mad. While this week it was a legitimate previously-mentioned source of frustration – her childhood bully (who conveniently shares the name of this episode’s director) mentioned in the Girder episode of Season One – the turn is too quick and too easy. Are the writers trying to tell the viewers that Caitlin is that much on edge? And the way both she and Vibe are captured is too easy and leaves one to wonder where did Prank and Trickster get their hands on power dampening cuffs? They’re as smart as a couple of toasters, so it’s not plausible.

While this episode was important to establish Ralph as the new hero for Central City to rely on, they already had a Flash-free six months where Vibe and Kid Flash were on the job. Plus, where the hell is Wally?! This could’ve been his turn to step up. As for Ralph himself, while I’m glad the first suit is tossed in the trash, why the hell didn’t Cisco give him a second suit to wear to replace the one that was wrecked in the bomb explosion? He made four suits for Barry for the first season, so it leaves one to wonder just how much Dibny really rubs everyone the wrong way. Regardless, it seems too careless for someone like Cisco. Sawyer also goes a little too over the top to deliberately score some laughs. The girly scream joke was good only for the first act. Tom Cavanaugh also seems underused in this episode as well; he seems to vanish into the background until the climax and comes in with the last-minute save with the acid solution.

While not a perfect episode – and like every Trickster episode, deliberately hokey in some cases given the character – it was also the inception of Ralph Dibny officially as Elongated Man and Devon as a good fill-in for Trickster until Mark’s press tour for Star Wars is done. The introduction of Big Sir was believable and worth tuning in to next week based upon the trailer and synopsis. Ralph’s new suit works in that it combines classic elements with that S.T.A.R. Labs feel. Overall a good episode.