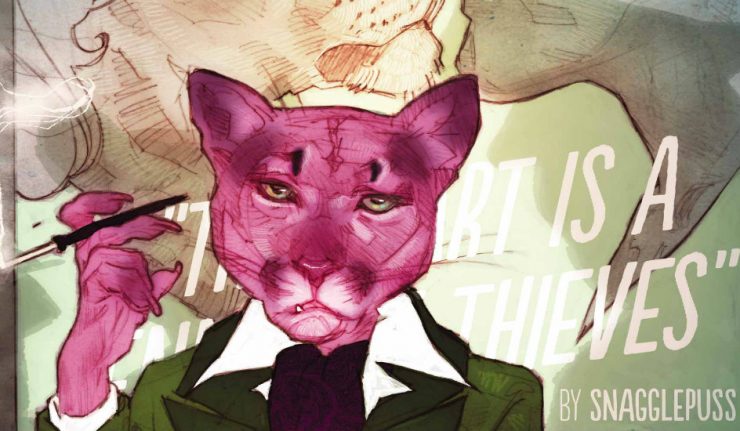 This month, Snagglepuss is faced with the reality of the Red Scare when the House Committee on Un-American Activities summons him to testify for a second time. His friend and fellow creative genius, Lillian Hellman, drops by to let S.P. know that the second time you are called, they will destroy you. Yikes.

Huckleberry Hound comes out and gets punched in the face. Not at the same time, but close enough. He is forced to face the realization that in order to be creative and successful, one must be true to one’s self, and since he is not able to be true to himself, he is unable to be creative.

Augie Doggie and Squiddly Diddly show up to remind readers that yes, this is really the most unique look at the Hanna-Barbera universe ever.

Once again, Mark Russell litters his world with inside jokes. You can not simply flip through this book, reading only the dialogue. While that is compelling, as is often the case in a Russell written book, the hidden messages and cleverness that goes on all throughout the book would be lost. In the capable hands of artist Mike Feehan, these Easter eggs are full of joy and hilarity.

For example, at one point we see a billboard for “Holy Smokes” and the hands of the Pope are holding a cigarette between hands that are clasped together in prayer. Our lead and his comrades (pun intended on my part) wander through Edward Hooper’s classic “Nighthawks.” They walk past a movie poster for a film called 500 Shoes under which the tagline reads, “your wife will love it.”  Gag after gag stick the landing. I will leave the rest for you to find yourself. Go forth and laugh.

The back pages of this book have a story called “Sasquatch Detective.” It is totally out of place. While it is true that Snagglepuss is funny, it is a satire. Sasquatch Detective reads like a farce. While a lot of folks do enjoy a good farce, I am simply not one of them, nor, do I suspect, are the readers of this.  I am not here to bash someone’s art, but I am here to wonder what the reason was for sticking this story here. It takes away from the tense final scene of the Snagglepuss story. Maybe it will go somewhere. DC is known for adding vignettes that tie in eventually a’ la Mother Panic and Future Quest, so I will hold out hope that it goes somewhere quickly or is put somewhere else.

This book is important. I am only two books in, so it is hard to argue that it is a modern day version of The Crucible, but let us keep in mind that Miller’s play was about the Red Scare while being set in the time of witch hunts. This book is set in the time of the Red Scare when the President of the United States claims that people who did not clap during his State of the Union speech committed treason. I suspect that Russell and Feehan have something amazing up their sleeves. We can hope, if this goes in the direction one expects it to go, Mark Russell will finally win an Eisner. 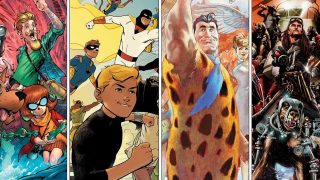 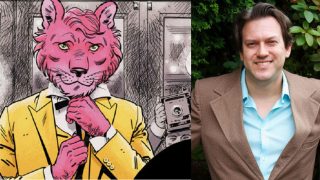