Trapped in Warden Wolfe’s metahuman wing awaiting Amunet’s auction, Barry must lead an escape for both himself and the “bus metas” without revealing his secret; Ralph’s new ability may hold the key to Barry’s freedom but personal demons plague his success. 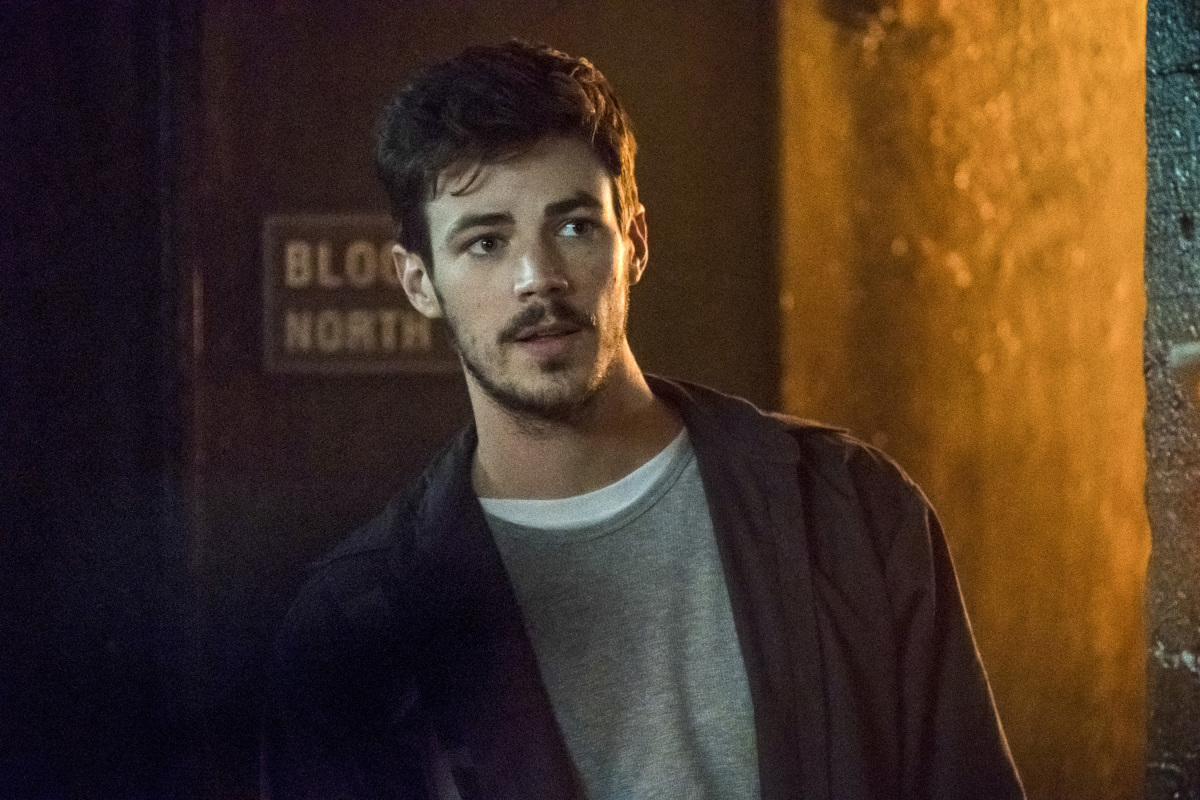 Metaphorically there is more than one prison in this episode. The first, of course, is Barry’s physical confinement. What works in this episode is that the writers return Barry to his scientific roots via his applied ingenuity in disabling the lock on his cell, and from there the route to the general population. We’ve come to the great escape portion of the show’s Shawshank fascination. After three years of seeing Barry solve his problems with his powers, it is a good dose of fresh air to establish how skilled Allen is beyond the ability to travel at the speed of light. Usually we only see a minor scientific explanation and evidence collection at a scene. He’s also extremely careful as to not show his speed powers given the company he’s keeping: the very metahumans created by his return from the Speed Force and those he’s put away. What works is that his plan ultimately fails given the odds stacked against him in the form of both Warden Wolfe and DeVoe. 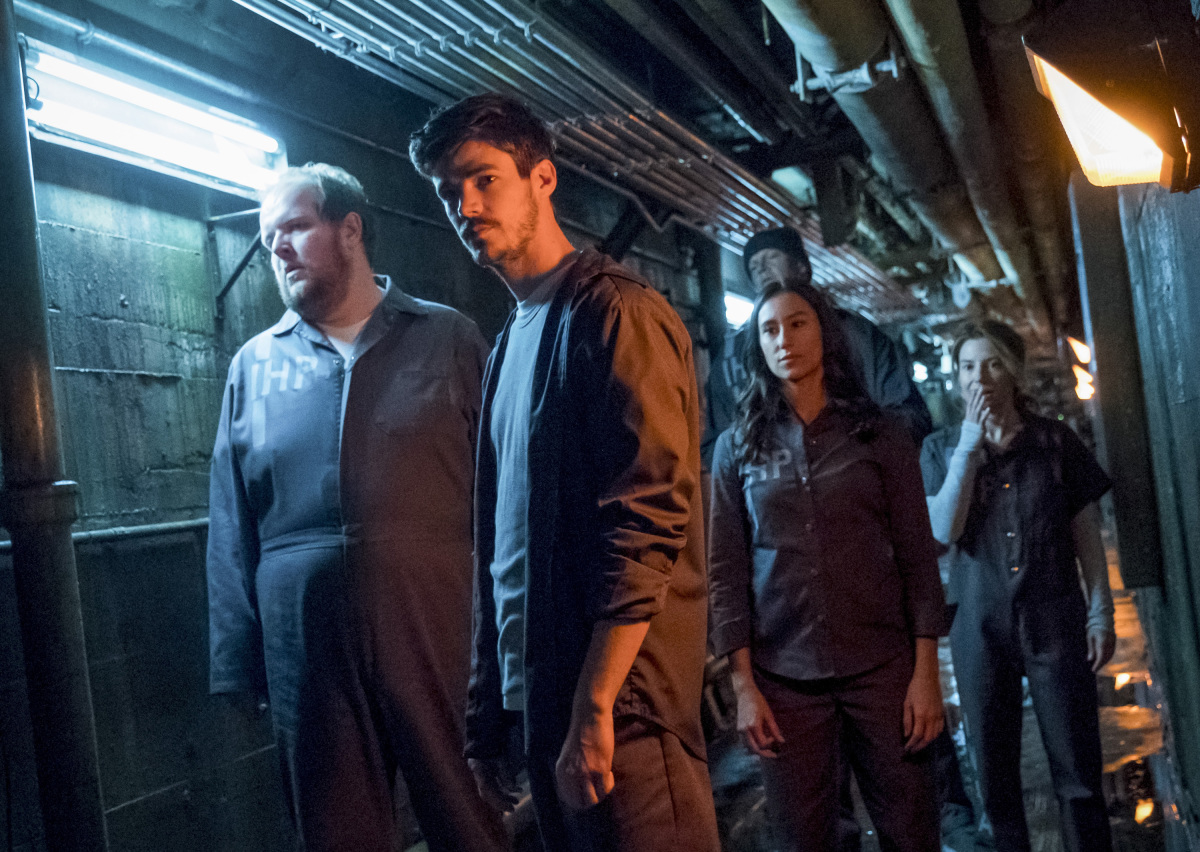 Sugar’s performance as Becky – thankfully less annoying from the last time we saw her and in a very touching scene with Barry – is a natural buildup to what ultimately turns tragic. The slow motion of her saying “Help me” and Barry’s incapacitated ability to reach her before DeVoe takes over her body is keenly felt, as is the “DAMNIT” reaction you feel when she says “Too late…Mr. Allen.” Becky’s the other true prisoner, and DeVoe takes away her chance at redemption, enslaving her to his Enlightenment. Innocence both robbed and corrupted. What works also in this episode is that you only see Barry use his speed to ironically get back into his cell; this gets across to the audience the ease at which he could escape if he wanted to. And already has. The next type of prison is mental, and it focuses on Ralph. His seedy associate already plants doubts in Dibny’s chipper new attitude and direction that sets him up to fail.

It’s cool seeing Elongated Man’s new ability to completely shapeshift into a different person. I don’t know if that actually is how he can morph in the comic, but it’s a creative use of his powers. It also becomes a bout of mind over matter; Dibny’s focus to maintain the form he’s in is a greater strain than just stretching and takes a physical toll. Shapeshifting allows performers who are usually the antagonists to act out of character as Ralph struggles in these forms to both maintain his appearance and deception. It also allows for the return of Neil Sandilands as Clifford DeVoe that successfully enables Barry’s appeal to go through. The decision to become Clifford to provide evidence is both a highly redemptive move on his part as well as a practical one; Ralph only has to move his mouth and can therefore hold his form a lot longer. The plot device enables Gustin to actively get involved in the last ten episodes of the season. 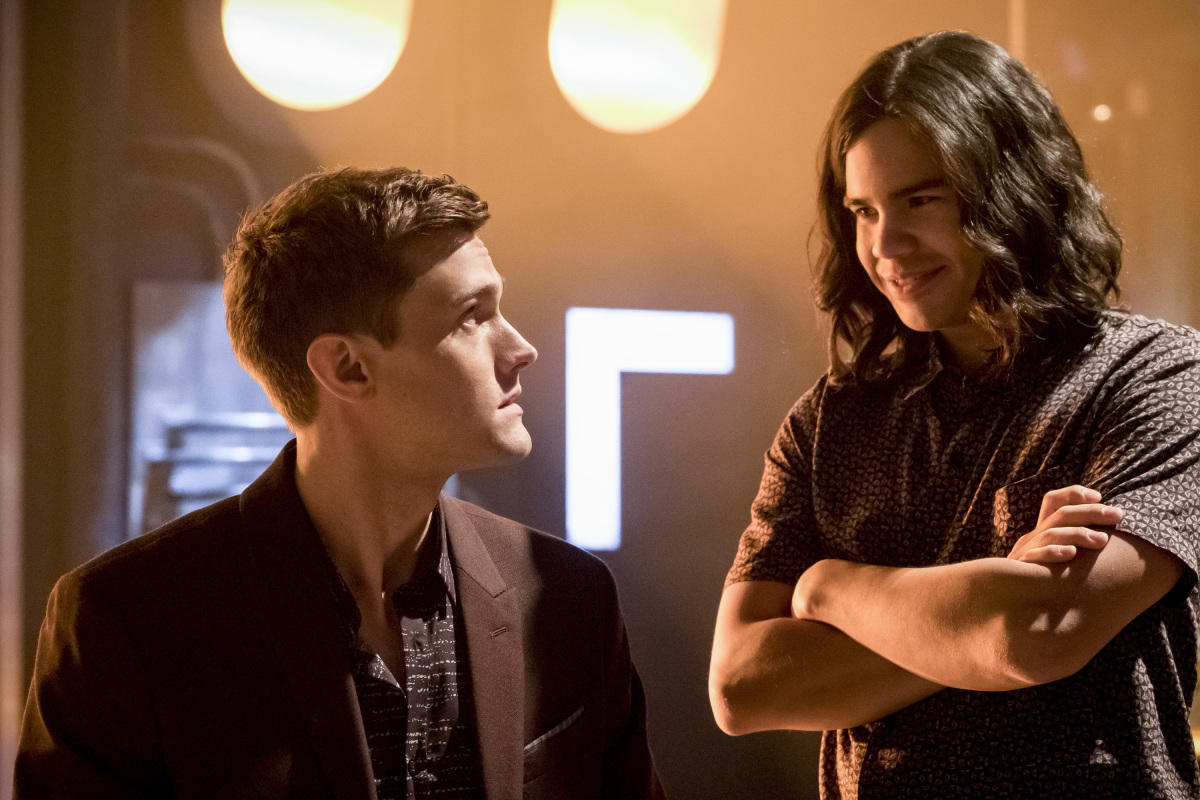 And finally, there is the emotional prison, inhabited by Marlize and, in some ways, DeVoe. Kim’s portrayal of a woman once committed, but now distant, is believable and understandable. Long before the ending, her quiet objection is felt through her facial expressions. From four years ago till now, she has endured much, and in the past few months her husband has changed beyond his own ability to see. Her mental defense with a favorite song between the two them speaks volumes. It’s a dual message to Clifford that he is not allowed in her head, and also reminds him of the man he was and is apparently trying to forget through his machinations. DeVoe, meanwhile, has become a prisoner of his own ambitions and is blind to his suffering wife. The surprise attack on the Bus Metas was a clearly calculated move, but the fact that he killed Warden Wolfe shows overcompensation. It is one thing to harvest the abilities that he helped instill, but to both kill a civil servant – corrupt or not – and to take yet another body when there was no physical need is quite another.

Further, he feels compelled to drug his wife to get her to reciprocate to his advances, albeit in the body of a woman. It will be interesting to see Sugar as a more confident and malevolent character. You can hear in her voice the lack of apathy at Wolfe’s death, and a complete lack of guilt for what is essentially tantamount to a date rape. The latter also shows a lack of faith in his wife’s commitment in spite of how far she’s gone for him. Clifford DeVoe has lost perspective and has become a mental parasite without sense of boundary or restraint. Every villain is the hero of his or her own story, and The Thinker has now become just another self-deluded antagonist in the viewer’s eyes. 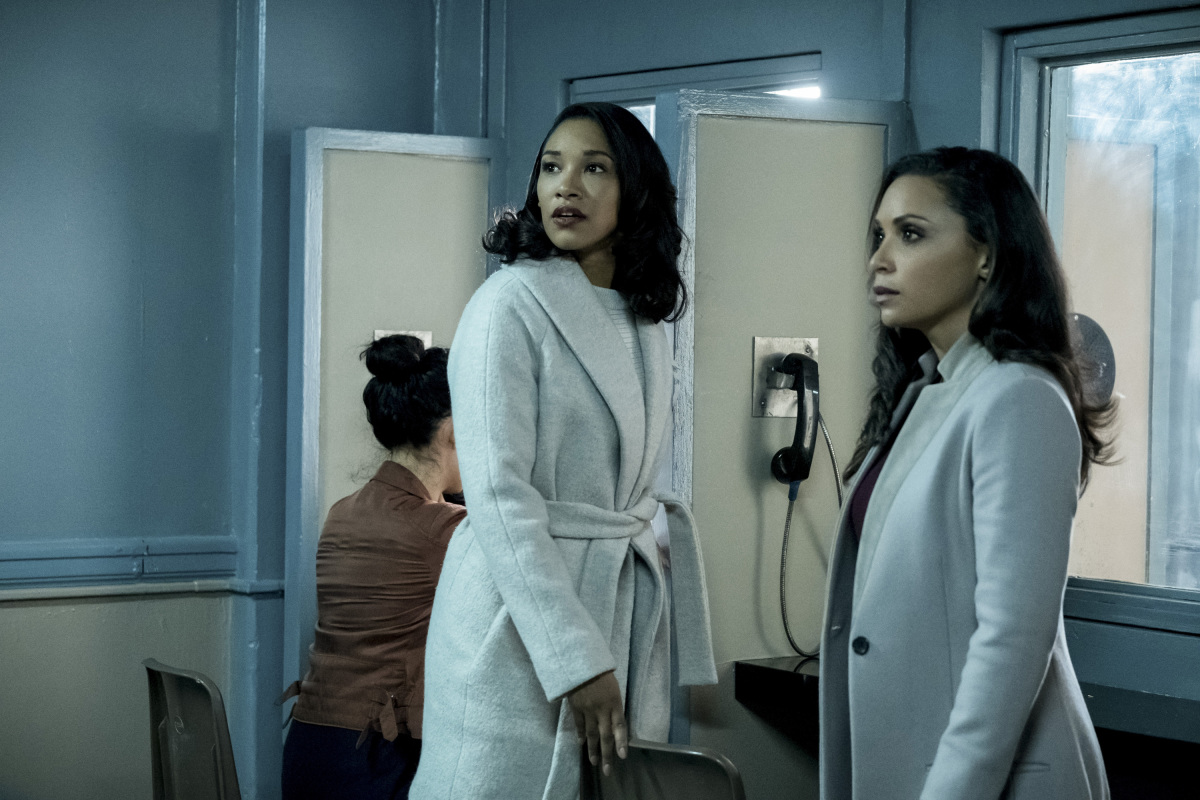 There are numerous drawbacks that make this episode less than perfect. For one, Barry’s exoneration could have waited till closer to the final episode of the season. While fantastic as it is, the swiftness of his exoneration is as fast as his conviction, which holds very little water. Then there is the question of Clifford DeVoe’s return courtesy of Ralph. Given that “DeVoe” has returned from the dead, this by rights can’t be a one-shot deal. There are too many loose ends to tie off: where he’s been, the state of his marriage, his position at the university, and so forth. When you consider these factors, the brilliance of Ralph’s idea to fight fire with fire becomes hollow. Then there is the quick dispatching of the Bus Metas; was this plot device a way for the writers to do away with villains that lacked the same level of substance as those established over the past four seasons? While it makes sense as to why The Thinker would create them in the first place, it feels like a tabula rasa to one-time baddies that failed to identify with the audience for the past four months. 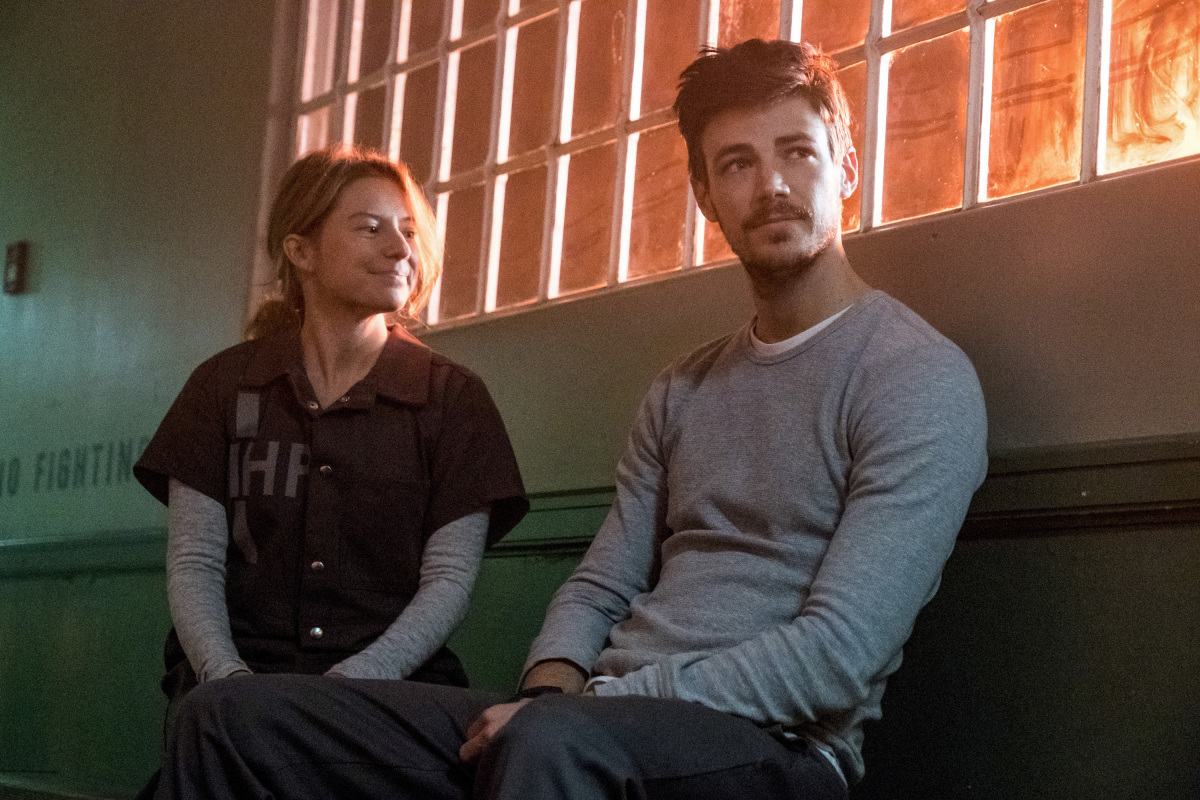 I also feel the twist ending of the date rape should have been motivated by a clear objection from Marlize. Her husband is now a woman and sees nothing wrong with it. Yes, the metahuman tears from the bachelorette party episode is a good way of making that individual relevant. However, DeVoe seems too easily pushed by hearing that song when SHE tries to read Marlize’s mind. Then there is ANOTHER episode focusing on Ralph trying to escape his demons. His journey’s fallen into a rut; he’s faced with a challenge, he blows it, then gets a pep talk and gets back into the game with nary a scratch. Thankfully, with Barry back, we’ll see less of this pattern. But the revelation that DeVoe might be targeting Ralph next barely registers and should have been more of a buildup. Plus of course everyone is overlooking the most obvious plothole: BARRY ALREADY KNOWS HOW TO DEFEAT DEVOE! So why the hell hasn’t the gang gone to work to invent the neural inhibitor yet? 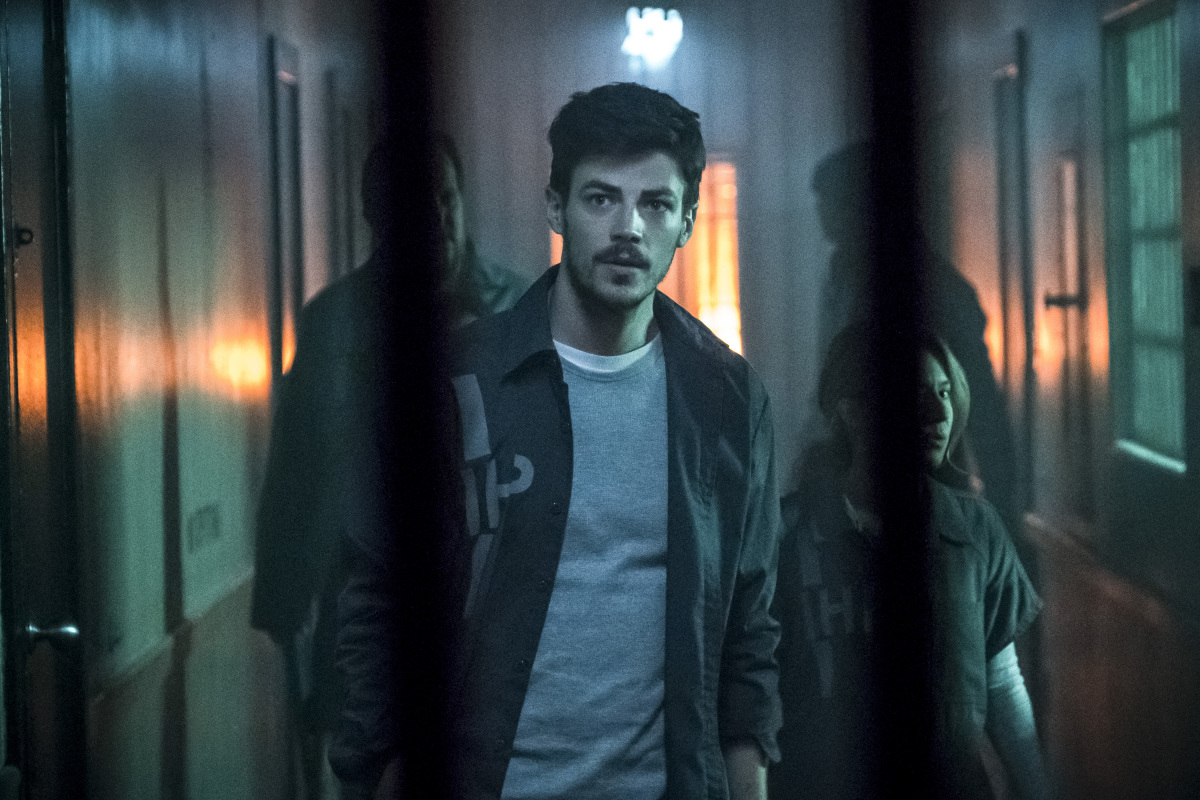 While some brilliant moments, I feel that Barry Allen’s incarceration was robbed of a satisfying end. It would’ve carried more weight to have him lose Becky to DeVoe and be behind bars. Whether or not it’s because Elongated Man’s learning curve wasn’t clicking with fans, I feel it should’ve been delayed. And again the angle of DeVoe as a woman should’ve gotten across more in the case of Marlize’s objection. I just hope that now that Barry is back on Team Flash – and hopefully will get a shave – the quality of the resolution of this season’s plot is more satisfying than this.