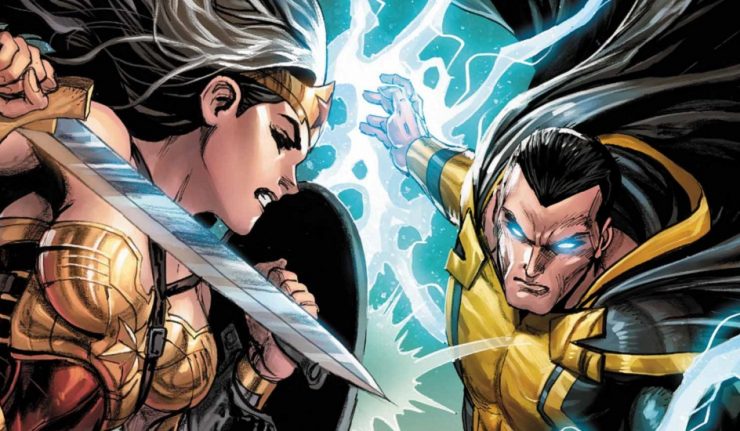 This is an interesting issue in that it attempts to some of the sub-plots while also moving one of the main story lines forward fairly significantly.  In Kandaq, Supergirl is challenged to learn to fight and be decisive in order to fight for peace by Diana and Black Adam.  At the same time Damian learns about Williams, Arizona and returns to Ra’s base with the intent of confronting his grandfather about the devastated city in Arizona.

Meanwhile, Booster is doing some training of his own.  He’s trying to train Jaime and prepare him for what happens in the real world of super-heroing.  They are interrupted by a lawyer who “reads” Ted Kord’s will aloud, revealing that Ted has left everything to Booster.

Upon confronting Ra’s about Williams, Arizona, things start to go sideways as Grodd makes a move against Solovar and his alliance with Ra’s.  Solovar retaliates with a massive mental command, setting up a showdown between himself and Grodd next issue.

Addressing some of the hanging sub-plots is definitely needed.  Damian’s scene time while pushing on of the main story lines forward, also contains most of the weight in the issue.  It is refreshing to see Damian have a change of heart as he sees the evil in Ra’s “test” on Williams, Arizona.

Wonder Woman’s speech to Kara is interesting as it sounds like the right thing for her to say, despite knowing this Wonder Woman’s alliance with this Superman and her different approach to the world than the Wonder Woman in the regular DC Universe.  It’s an interesting juxtaposition and it cleverly plays upon the reader’s knowledge of Wonder Woman making her speech somewhat ironic.

One of the few drawbacks this series has is the scope it encompasses.  There are so many sub-plots and characters in this massive story that it can be easy to forget about some of the story lines.  This was a needed issue, perhaps more issues like this would be good to keep all the plot lines in order.

This necessary issues reveals a real turning point for Damian as he appears to maybe be about to turn back to his father, the Batman and away from his grandfather, Ra’s al Ghul.  The other players on the board get some movement as well and Kara is positioned to be a new hope, but on which side will she fall, if on anyone’s side at all. 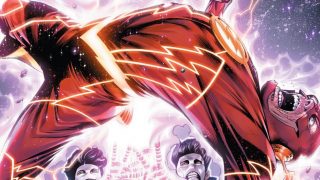 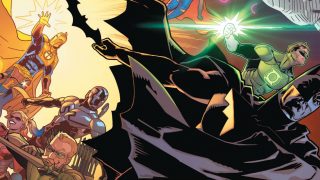