Review: New Super-Man and the Justice League of China #21 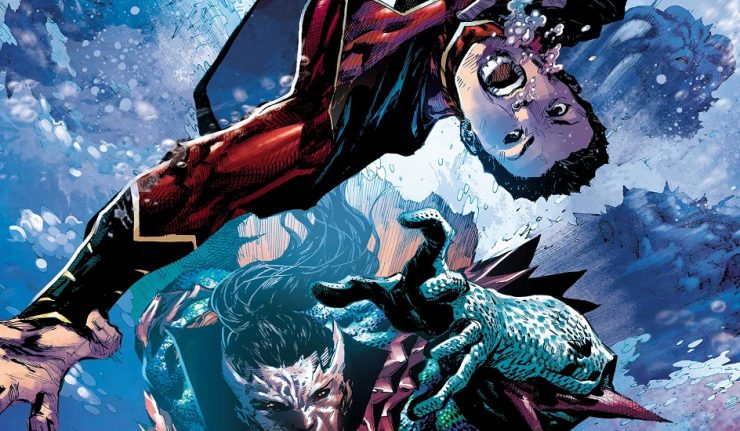 “Seas of Change” part two! The Justice League of China is on its own and restoring balance to the world one problem at a time. But when a fleet of North Korean warships arrives on their shores hunting down an emerging aquatic metahuman, Kong Kenan and his friends may be in over their heads—literally! The saga of the Aqua-Man of North Korea continues here!

We get to see Lady Green Snake in action, which is China’s version of Wonder Woman, as she displays some powers Wonder Woman does not have, like telepathic abilities. This offers readers a new universe with familiar looks. This book also gets political, as the team defends someone the North Koreans believe to be a murderer, which is where their idealism comes under threat.

The book also manages to keep it light through the subject matter in this particular arc. It seems relevant to that part of the world as we get a love triangle between Kong Kenan and his girlfriend, their version of the Flash, Avery. Lastly, this book’s uses of Eastern mythology and religion is brought to light, with the inclusion of Ying and Yang in this issue, showcasing Yang’s thorough research.

This book is funny, smart, fantastical and reels the reader in by giving them something both familiar and unfamiliar simultaneously.