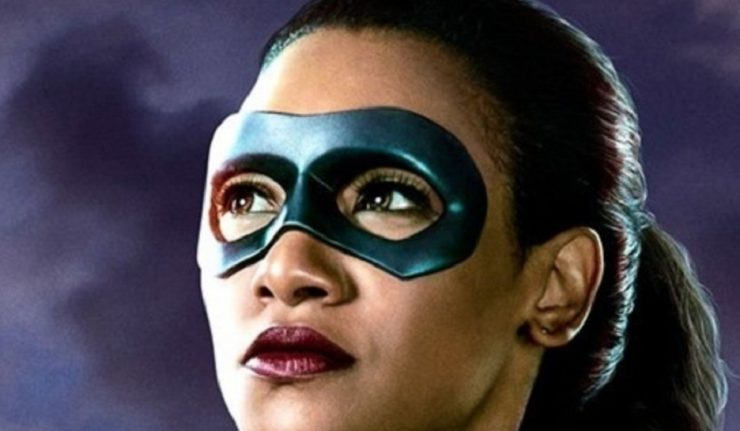 A Bus-Meta with the ability to transfer dark matter DNA passes Barry’s speed to Iris, who must then battle an accidentally-created menace while Harry takes a dangerous risk to level the playing field with DeVoe.

The focus on Iris works in this episode because it deals with an uncovered topic of discussion: Why did she quit her job as a reporter to join Team Flash full time? Even I, in my reviews, have pointed out why she isn’t at her day job and always at S.T.A.R. Labs in the Cortex. The fact her life was threatened for months last year and her husband was lost to the Speed Force are sufficient reasons for her to shut down. And when this power swap happens, she’s booted out the door by fate to fill in for Barry.

What works is that she’s not an instant expert at Barry’s abilities; it’s one thing to give instructions via comm link as to how Flash should operate, and yet another carrying them out in person. Seeing her make similar flops that Barry made in year one was nostalgic and hilarious. There’s no offered explanation as to why her lightning is a different color, but it’s probably a byproduct of it being a DNA swap and not a legitimate Speed Force empowerment. The fire proves that point for Iris, as well as a learning curve for Barry. Seeing her show Barry the blog story she wrote three years ago after he first beat Girder made me smile. That said to me that the old Iris was finally back.

Getting back to Barry, depowered for the third time in his superhero career, what works is that he’s not as worried as he’s been the first two times. It’s probably because they’re in the hands of the woman he loves and can therefore trust her with them. For the first time, he’s in the position that Thawne/Wells, Cisco, and Caitlin have occupied while he is out in the field. He has to convey to Iris how to proceed, to be a vocal leader, and he’s a novice at this. He’s not like Thawne; Thawne, in season one, had decades of experience to impart to Barry, albeit for his own purposes. Barry doesn’t have that, so he is all thumbs trying to direct his wife through a life-threatening situation. Of course he wants them back, but he shows the best of himself when an opportunity comes for the reversal, he allows Iris to make the choice to return his speed.

Another good example of growth is that for once BARRY DIDN’T NEED TO UNMASK TO GET A BUS-META ON HIS SIDE! The Bus-Meta in question, Melting Point, is different in the sense that he sees his ability as a means to depower those who abuse their gifts. However, he’s not malevolent or arrogant to perceive himself as an authority. The characterization of Matthew Kim almost mirrors Barry’s altruistic nature, and that may work to their advantage.

The theme of underlying fears rings strong for not just Iris, but Ralph as well. He’s now living at S.T.A.R. Labs as opposed to living in his P.I. office ala Jessica Jones (probably known to Cisco since the Arrowverse knows about Marvel in comic book format). By doing this, Wallace acknowledges that Dibny is feeling the pressure as every plan to date to stop DeVoe has gone belly up. And it does very well feel very much like the position Iris was in last season, so that wasn’t a shot in the dark. To Ralph, those three metas represent the last bowling pins that The Thinker has to knock over before getting to him. Given that Kim is now in residency as well at S.T.A.R. Labs, Ralph is again in role of mentor to a fellow Bus-Meta.

Getting back to Thawne, the original incarnation of Harrison Wells influences the present as Harry makes a creative play to create similar tech to DeVoe’s to even things up. Cavanaugh plays up the controlled mad scientist in Harry in a manner that is driven but hilarious. He isn’t at Christopher Lloyd level mania, but he’s in the same vein as he’s risking his own mentality and his sanity in matching wits with The Thinker via his own thinking cap. What he’s doing is trying to refabricate the same level of tech without blueprints. It again plays up the level of desperation but not so it overtakes the episode. It’s only with Cisco’s help that Harry’s plan actually works in that he deduces the names of the next two targets and even assists with taking down one of Kim’s meta-humans. Overall, good points in this episode.

Once again the antagonists are the main point of complaint. Instead of big names we’re introduced to Smallville-style freaks of the week. Further, we see this Jack Black lookalike who was a hostage of a fire-empowered Meta-human become a villain in his own right when Kim swaps their DNA by accident. It further pushes forth the notion that whoever gets powers in Central City and is not Barry Allen becomes a bad guy and it’s getting tedious. Two-thirds of the new superhumans wind up in Iron Heights with a few exceptions; it leaves one to wonder how many good people are actually in Central City? Then there’s Ralph pretending to be DeVoe to keep Barry out of jail, and this time needing to meet with the overzealous mayor. Couldn’t we have seen this meeting at the end of the episode? How much longer can Team Flash keep up the deception before Marlize decides to blow Dibny’s cover? And finally there is Iris’ makeshift costume. Barry’s costume is usually friction proof and made from scratch. And yet Cisco’s suit for Iris includes the jacket she was wearing when she was empowered. How did he make it friction-proof so quickly? And then there’s Jesse Quick’s mask; if it’s molded on Jesse’s eyes and nose bridge why does it fit Iris’ face so perfectly? There are a lot of holes surrounding this costume, right down to the high heeled boots.

While it was fun seeing Iris as a speedster and getting her groove back, we’ve seen this kind of plot device in both Smallville and Lois and Clark: The New Adventures of Superman and the antagonist was slightly weak. I’m hoping that the episode after the hiatus will have something more to offer.