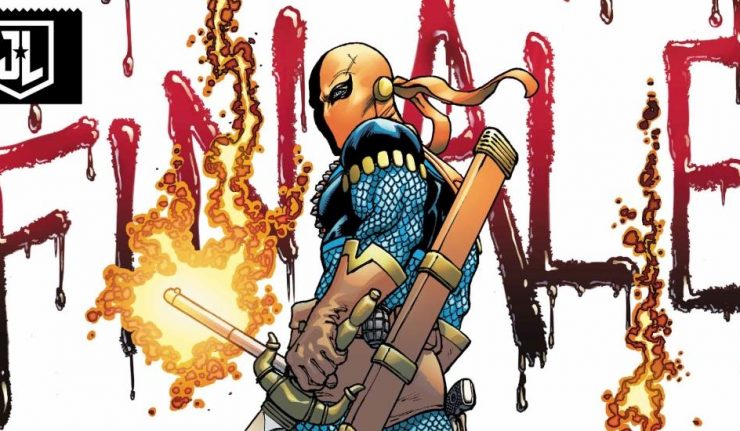 “JUSTICE LOST” finale! Struggling to save one of their own and extricate themselves from the grip of war, the Justice League’s hand is forced by the mercenary Deathstroke! Decisions must be made about Red Lion’s brutality, the insidious tactics of the Fan and the League’s role as the World’s Greatest Heroes. When the dust settles, will the old alliances still stand?

In this final issue of this incarnation of the title, Christopher Priest wraps up his run and ties up loose ends. Cyborg and guest-star Deathstroke hatch a plan to extract the League from their precarious situation in Africa, while Raven strives to save Wonder Woman from death.

There are a number of instances of humour in this issue, some of which are more successful than others. The best examples center around Jessica, like how she goes to Wayne Manor to confront Batman over having kissed him and finding herself face to face with his fiancé Catwoman instead.

Also, I liked how Jessica echoes Guy Gardner from 1987’s Justice League #1, sitting at the empty meeting table and imagining that she’s the League’s chairperson.

Plus, Martian Manhunter shows up, signalling that J’onn’s long absence from the League is nearing an end.

I wonder if Priest knew how short his run on the title would be when he started the current storyline. The problem of The Fan is solved by his assassination – not by the League, but still an unsatisfying end to the problem and the sticky political situation is solved by a quick staged fight. It all seems a bit too neat and somewhat rushed. Somehow, I think Priest’s tenure as writer came to an end a bit earlier than Priest was expecting.

Although there were some nice bits of humour, some of the humour fell a bit flat. Simon and Superman’s long-teased lunch finally took place, but Simon assumed that he was being fired from the League and stormed out, not even letting Clark get a word in edgewise. This seemed to be an anti-climactic resolution to this plotline after all the fretting Simon did over this lunch date.

This final issue adequately serves to cap off the series, but it does leave me a bit regretful that Priest didn’t have a bit longer to fully realize the potential of this storyline. However, I this is somewhat ameliorated knowing that Scott Snyder will soon be helming a new Justice League series.