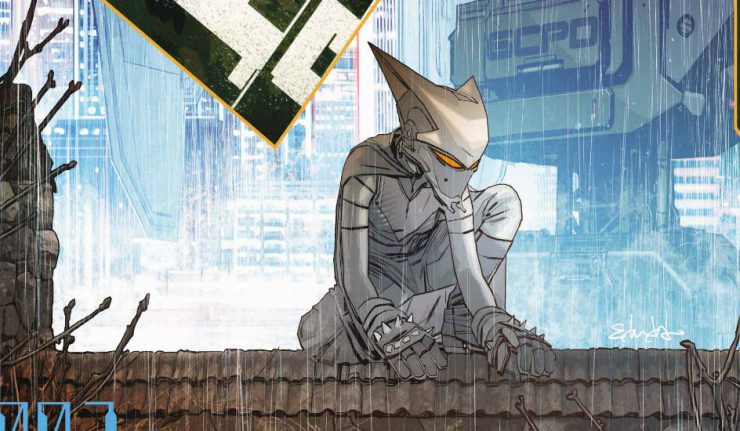 Drawn by: Ibrahim Moustafa and Paulina Ganucheau (back up story)

Mother Panic: Gotham A.D. is exhibiting some similarities with Watchmen, but not in an overt way.  They share a world that lacks caped heroes and villains and a protagonist that is trying to solve a mystery.  Issue #2 opens with Violet still on the trail of her mother.  She’s taken the Joker’s information at face value and gone into Robinson Park and discovers that it’s overgrown with plants that sometimes appear to have a mind of their own.  She finds a cabin guarded by large cats.  Not like overgrown house cats, but tigers etc…  My, oh, my, who could be in that cabin?

Violet is greeted by an older Selina Kyle.  She’s wary of Violet, but comes to believe her story.  She offers assistance and tells her where to meet later that night.  In the city there’s an incident that appears to be a costumed type (looks like Luthor in his Superman armor) who is taken down by the Gotham Police.  Interestingly, it’s all a set up by Madam Gala and the Collective.  This is what Gala is calling an installation- she sees it as an art piece.  But, it’s propaganda designed to make the public distrust costumed heroes and trust the establishment of New Gotham.

Violet goes to the meeting place as directed later that evening, and is greeted by a young girl in Selina’s Catwoman mask.  She helps Violet get into Arkham Asylum where the Joker has told Violet her mother is being held.  In Arkham, Dr. Harleen Quinzel still has a position of importance and is confronted by Madam Gala- Quinzel’s cover may have been blown.

The Watchmen similarities are effective, not because it reveals clues to what’s going on or rides the success of that important story, but because it informs the reader what kind of story is being told in Mother Panic: Gotham A.D.  It’s a story like Watchmen, super-heroes are gone, outlawed and the government is not to be trusted.  Inside this world are some mysteries for Violet: Why is her mother in Arkham?  What happened to Batman?  Why are all the super-heroes gone?

The appearance of Quinzel, Selina and the suggestion of Poison Ivy are all welcome.  They are familiar faces that promise to be of help to Violet.  It’s like Rorsharch recruiting Nite Owl and Silk Spectre.

The back up story very cleverly executed. The text doesn’t match the art and tells a unique tale from the perspective of the Joker on his relationship with the Batman.  It plays on the idea that Batman is the Joker’s perfect antagonist and that the Joker can only feel fulfilled by matching up against the Dark Knight.

This is a great issue with no negatives.

Two issues in, Mother Panic: Gotham A.D. is building a post-Batman Gotham with some deeply hidden mysteries that should prove to be challenging for Violet to uncover.  She may be reluctant at first, but she going to get some help from the Gotham City Sirens to take down Madam Gala and the Collective.