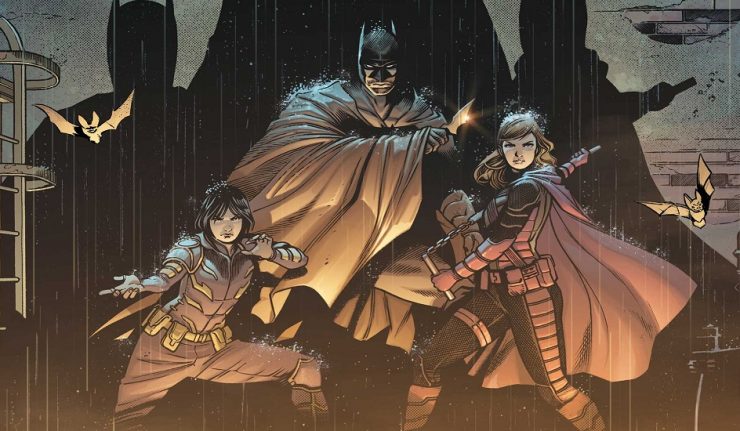 “Batmen Eternal” part five! The worst possible future for Gotham City has been locked into place, and there’s nothing Batman can do to stop it…until Stephanie Brown and Cassandra Cain catch a glimpse of something they never would have thought possible!

We get to see Renee Montoya and Harvey Bullock in this issue, as both characters rarely see the light of day. Montoya was last seen on the silver screen, and Bullock is currently on Gotham as a rather relatable and likable version of this character, not the one comic book fans are as accustomed to. We also get to see Spoiler and Cassandra in action, as both characters usually play the background, but here are side by side with Bruce on a recon mission to penetrate Ulysses’ secret hideaway.

We also a get a fist fight between Kate and a nanobot-controlled Tim, where Kate uses her smarts and fighting skills to match who Tim has become from Ulysses’ technology, providing readers an interesting fight.

Lastly, Kate and Cassandra get a view of what they could have been from Ulysses’ computer and Tim’s memory of an alternate universe, giving fans a hopeful itch for an Elseworlds storyline.

Buy, as this book reminds readers just how brilliant Tynion is, especially when he plays in Batman’s world.