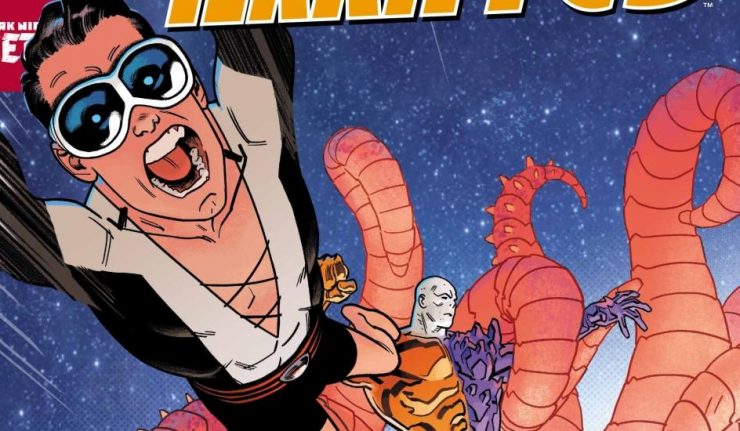 “THE GIRL FROM BGZTL”! Return with the Terrifics to the Phantom World! As our heroes continue their trek through the multiverse (dark or otherwise) to find a cure for the condition that binds them together, their journey brings them to the home planet of Phantom Girl. This is one tearful reunion you do not want to miss! Plus, a giant space squid attacks! That’s right, a giant space squid!

With this issue, we start to see the group coming together as a team. The heroes are now sporting the costumes that have previously only appeared on the covers of the series, and Plastic Man even gives the group its name – albeit as a flippant remark, but seeing as it matches the name on the front cover, it seems a safe bet that “The Terrifics” will stick.

The interaction between Plastic Man and Metamorpho is a pure delight. For example, Plas keeps riffing on Rex’s use of “Francium” as an expletive. When Plas later exclaims “Holy Helium!”, Rex has to tell not to steal his shtick. And then there’s their unique way of playing Rock, Paper, Scissors…

Linnya is shown to be rather perceptive about her teammates, which allows us a peek behind Mister Terrific’s stoic demeanour, which she can see is hiding a deep sadness.

And it was rather touching to see Plas trying to comfort Phantom Girl by pretending to pat her on the shoulder, despite not being able to actually touch her. And the bittersweet end of the story will hit you in the feels.

Negatives? What negatives? I can’t find anything that I think could have been improved upon.

Lemire has created something really special in this title, with equal parts comedy, drama, and action. This is undoubtedly one of the best books DC is currently putting out. The Terrifics is terrific reading.