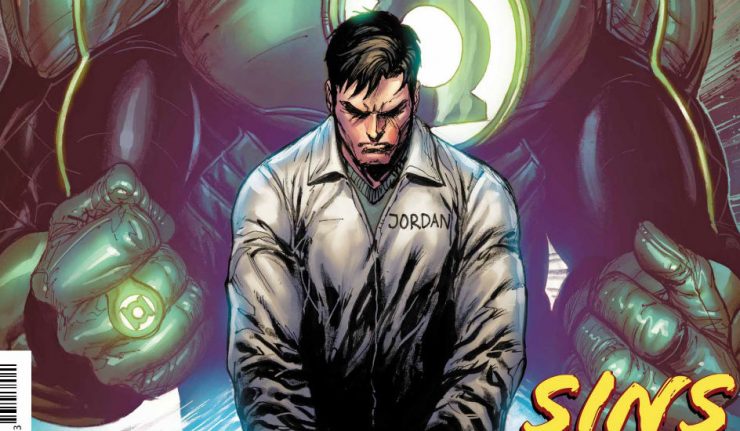 This may be my favorite interpretation of Guy Gardner, ever.  Does it matter that he’s dead and it’s just Hal imagining Guy?  Maybe….  Don’t tell Robert Venditti.

Hal Jordan is imprisoned by the Guardians because of his role in Superman’s attempted power grab in Injustice: Gods Among Us.  The head jailer on the prison planet of Harring is Soranik Natu, Sinestro’s daughter and Green Lantern.  After his imprisonment, Hal is joined by Sinestro himself.  As Hal tries to work through his guilt over his actions or rather non-action under the influence of a Yellow Lantern ring, Soranik confronts her father with the intent of finding out the truth behind her mother’s death.

As Soranik works it out as much through Sinestro’s responses as his failure to respond, she gets and alert that Tomar-Re has been killed and there are incoming…Red Lanterns…Hate.

While there may not be a lot of plot in this issue the emotions are running very high.  Taylor is able to take us into the psyche of Hal Jordan as he struggles with his past and uses Guy as his sounding board.  That should tell you where he is!  Soranik relates a compelling personal experience of her first experiences as a Lantern on Mogo and breathing his air and swimming his oceans and how she felt when Mogo was destroyed and Hal stood by and did nothing.  Soranik really hits a nerve as she describes her feelings and it’s easy to relate this to anything one has lost in life.

This issue also broaches the subject of redemption for Hal Jordan.  It’s suggested throughout that he may get his chance, but he Hal has no illusions about his transgressions.

Normally, an issue that moves the plot minimally, receives negative points, but in this case, the emotional content is so strong and resonant that it transforms the issue into something else.  Plot isn’t important or missed, the point of this issue is the emotion.  And, it is welcomed!

It’s only very special issues that survive on emotional content.  This is one of those issues.  The quality and content of this issue should be enough to give anyone Injustice 2 a chance. 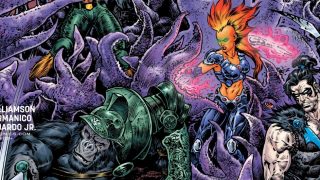