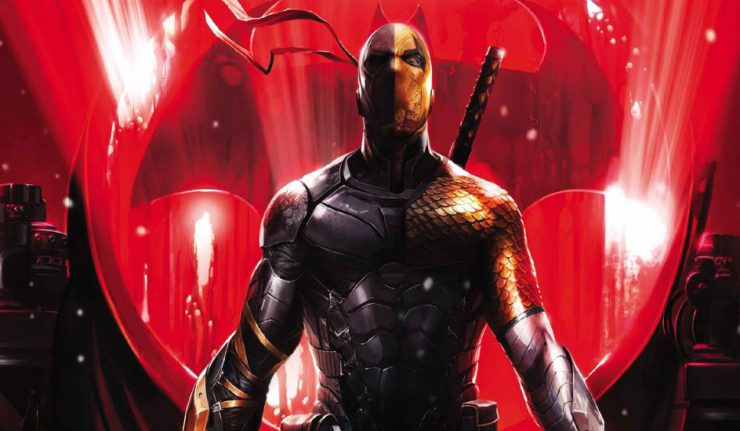 The war between Deathstroke and Batman continues! Batman has made it his personal business to cancel every one of Deathstroke’s contracts! As Deathstroke pursues his current contract, Batman is literally hanging on for the ride attempting to stop him! However something isn’t all as it seems with this contract, and by the end of this issue a shocking revelation is made!

I’ve always admired the rivalry between Batman and Deathstroke. Although both are different, they are also very much alike. Both are driven men shaped by tragedy, both have experienced personal loss, and lastly both are driven to finish their missions by any means necessary. Priest shows us in this very issue that this is the definition of an unstoppable force versus an immovable object. The action is intense in this issue as Deathstroke hunts down a cold war era hero known as the Human Dynamo. A contract has been placed on the former hero’s life, and Batman intervenes to stop Deathstroke from killing the man. A surprise revelation is made about the contract and who exactly put the hit on the Human Dynamo to begin with. I must admit, the spin that Priest gave us here was pretty creative.

Although it’s really not a negative I really hope that Damian is not actually Slade Wilson’s son. It seems that Talia lied to not only Ra’s al Ghul but also Bruce Wayne when she claimed that Damian was his actual son. She explains to Slade that she wanted to win Bruce’s heart and to produce an heir like Ra’s wanted. Wilson of course is still in denial about all of this, but is working with Talia to find out her endgame. Wilson feels that Talia is blatantly lying while Bruce is actually looking for the evidence himself. Even during the fight between Batman and Deathstroke to two compare how different their mentoring styles are–without knowing that they both have damaged protege’s in a way. Deathstroke with his son Joseph, and Bruce with Jason. Towards the end of the issue we find out that a video that was being played in the beginning of the book was actually being watched by Damian Wayne. In this video it’s revealed in a subtle way that Deathstroke is his actual father. It’s at this moment I give Carlo outstanding recognition for drawing Damian’s face so cold, but yet you can see the pain in his eyes from learning this. Carlo’s work in this issue was great–but this last page was in my opinion his best moment in terms of the emotion that you see.

Deathstroke #32 is a great read and I’m looking forward to the next issue. I really hope that Slade is right and this is some elaborate trick by Talia for some unknown reason. If not, then it really says how messed she is as a person to not only toy with Bruce’s emotions in such a way, but also Damian’s as well. The relationship between these two has come a long way over the years and I hope it doesn’t end like this.