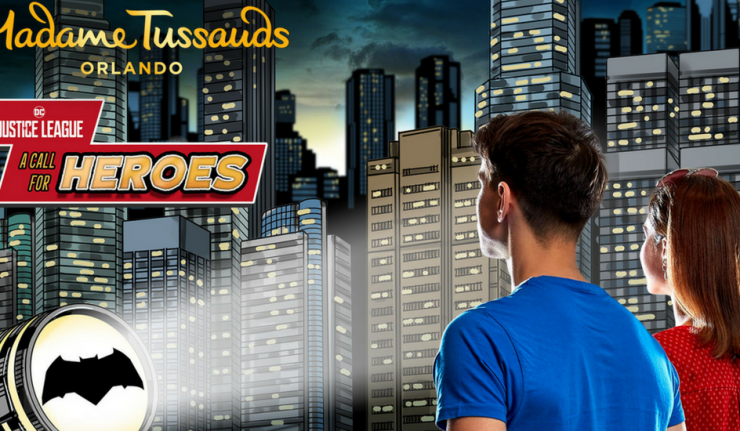 Madame Tussaud’s is having a once-in-a-lifetime event where you can help Wonder Woman, Batman, and Superman take down LexCorp! This is after the famous wax museum unveiled interactive Superman and Wonder Woman figures. Check out DC’s press release below!

JUSTICE LEAGUE: A CALL FOR HEROES OPENS MAY 25

ONLY AT MADAME TUSSAUDS ORLANDO

The epic, new attraction experience will unite fans of DC’s Justice League with their favorite DC Super Heroes in an action-packed experience unlike any other

ORLANDO, FLA. (May 23, 2018)– HEROES UNITE! This summer’s most anticipated, blockbuster attraction experience debuts this week at Madame Tussauds Orlando. Now, everyone can experience the epic action and adventures alongside Wonder Woman™, Superman™ and Batman™ with the official opening of Justice League™: A Call for Heroes on May 25.

Designed in collaboration with Warner Bros. Consumer Products on behalf of DC Entertainment, Justice League: A Call for Heroes takes fans on an action-packed mission to help the Justice League save the world! Guests will step into the periled cities of Metropolis and Gotham City. Featuring an all-star cast of DC Super Heroes that includes Justice League’s Gal Gadot as Wonder Woman, Henry Cavill as Superman and Ben Affleck as Batman, guests will be united with the League in series of once-in-a-lifetime, hands-on missions to help save the world from LexCorp.

Henry Cavill and Gal Gadot provided fans the WORLD PREMIERE of their interactive wax figures on Tuesday, May 22nd via their Instagram channels – check out their amazing reactions here:

“You have to see it to believe it!” said James Paulding, General Manager. “From the unbeatable roster of DC Super Heroes to all of the sensational, high-tech elements – this is Madame Tussauds like you’ve never experienced.”

Fans will come face-to-face with their favorite DC Super Heroes. Justice League: A Call for Heroes combines authentic replica props and costumes with high-tech and immersive experiences like a first-of-its-kind, guest activated moving figure, projection-mapping, and more. The all-new experience is the first and most exciting part of a greater transformation across Madame Tussauds attractions worldwide to deliver an unrivaled, next-level live fame experience.

LexCorp’s experimental technology has gone haywire and is threatening the world! The Justice League needs your help as they work to save innocent civilians while figuring out a way to stop Lex Luthor’s out-of-control experiment before it’s too late! Accept your mission and step into Metropolis and Gotham City to help the legendary DC Super Heroes!

It will take the strength of Wonder Woman’s ‘POWER GAUNTLETS’ to block the signal of the LexCorp transmission., Guests must harness all of their energies, and strike the signature power pose, to create a force strong enough to help Wonder Woman create a great explosion with wind and sound effects that will BLOW. YOU. AWAY.

LexCorp’s transmission has caused a helicopter to go haywire, and it’s hurtling towards the ground! Guests will need to race into action alongside the Man of Steel to help him lift the helicopter and save it from crashing to the ground. As guests summon all their strength to push upwards, Superman will thrust the helicopter back into the sky. With this amazing feat, guests will be the first to experience a dynamic, fully-articulated Madame Tussauds figure that REALLY MOVES!

But, the battle isn’t over yet. In order to deliver one last, crushing blow to LexCorp, Guests will need to step onto the rooftops of the Gotham City Police Department and use the legendary Bat-Signal to call Batman into action. Billowing smoke and wind will reveal the formidable figure as he’s lands on the rooftop above, ready to save the world.

With the announcement of Justice League: A Call for Heroes earlier this spring, fans worldwide took to the streets to #FindTheMotherBoxes for a chance to win a first-look at the new attraction. Five brave challengers scoured the Earth following clues on Instagram to unleash the immense power of Mother Boxes hidden in in New York City, London, Toronto, Atlanta and Orlando, unlocking an unbelievable VIP experience to be the first to unite with the Justice League at Madame Tussauds Orlando.

Each won a trip to Orlando to be the FIRST to experience Justice League: A Call for Heroes with hotel accommodations at Rosen Shingle Creek, tickets to MegaCon Orlando and SEA LIFE Orlando Aquarium.

You won’t want to miss your chance to join the Justice League. For tickets, visit www.madametussauds.com/Orlando.

Fuelled by his restored faith in humanity and inspired by Superman’s selfless act, Bruce Wayne enlists the help of his newfound ally, Diana Prince, to face an even greater enemy.  Together, Batman and Wonder Woman work quickly to find and recruit a team of metahumans to stand against this newly awakened threat.  But despite the formation of this unprecedented league of heroes—Batman, Wonder Woman, Aquaman, Cyborg and The Flash—it may already be too late to save the planet from an assault of catastrophic proportions.

ABOUT MADAME TUSSAUDS ORLANDO
Madame Tussauds Orlando is an interactive wax experience where guests are guided through immersive themed rooms where they can shake hands with the President, get on stage with pop princesses, or get up close and personal with a Hollywood heartthrob and take the ultimate selfie! For more information, visit www.madametussauds.com/orlando.

ABOUT WARNER BROS. CONSUMER PRODUCTS
Warner Bros. Consumer Products (WBCP), a Warner Bros. Entertainment Company, extends the Studio’s powerful portfolio of entertainment brands and franchises into the lives of fans around the world.  WBCP partners with best-in-class licensees globally on an award-winning range of toys, fashion, home décor, and publishing inspired by franchises and properties such as DC, J.K. Rowling’s Wizarding World, Looney Tunes and Hanna-Barbera. The division’s successful global themed entertainment business includes groundbreaking experiences such as The Wizarding World of Harry Potter and Warner Bros. World Abu Dhabi (opening 2018). With innovative global licensing and merchandising programs, retail initiatives, promotional partnerships and themed experiences, WBCP is one of the leading licensing and retail merchandising organizations in the world.

ABOUT DC ENTERTAINMENT
DC Entertainment, home to iconic brands DC (Superman, Batman, Green Lantern, Wonder Woman, The Flash, etc.), Vertigo (Sandman, Fables, etc.) and MAD, is the creative division charged with strategically integrating across Warner Bros. and Time Warner. DC Entertainment works in concert with many key Warner Bros. divisions to unleash its stories and characters across all media, including but not limited to film, television, consumer products, home entertainment, and interactive games. Publishing thousands of comic books, graphic novels and magazines each year, DC Entertainment is one of the largest English-language publishers of comics in the world.