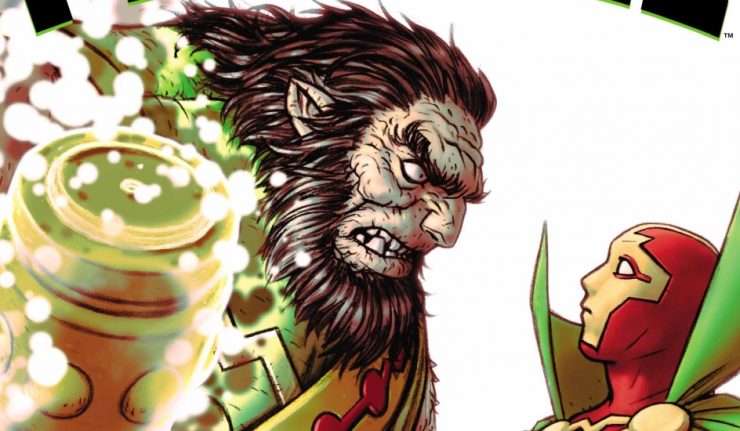 After war comes peace. The bloody battles that waged across New Genesis and Apokolips have come to an end, and now Mister Miracle and Kalibak must sit down and discuss a truce. Can Scott Free trust the former minions of Darkseid to keep their word? Not likely, but a leader sometimes has to take a risk in service to the greater good. Perhaps the more pressing question, though, is whether Big Barda can make it through the negotiations without beating the life out of the assassin Kanto.

In this series, King loves contrasting the grandiose Fourth World sagas with ordinary mundane tasks. It seems that even gods have to deal with the minutiae of everyday existence. The series has been dominated by the action and bloodshed of all-out war between New Genesis and Apokolips, but this issue finds Mister Miracle and Kalibak at the bargaining table negotiating a treaty to end the war.

And this negotiation is a long tedious task, with precedents set by previous treaties and disagreements over whether the New Genesis or Apokoliptian calendar is to be used.

The negotiations take place on Apokolips, and King goes to extremes to show the brutality of the planet. The negotiation table is held up by captured New Genesis gods, one of which Kalibak kills out of anger. And in a bit of dark humour, Mark Moonrider of the Forever People is shown to be chained up at the bottom of a pit that is used as a toilet.

There is also a touching scene where Scott and Barda use Granny Goodness’ Mirror of Goodness. Although they exhibit godly perfection outside, the mirror reveals the damage to their souls from their upbringing on Apokolips.

However, Darkseid rejects the negotiated treaty and makes a counter-offer. Darkseid will cease hostilities, return all prisoners, and surrender the Anti-Life Equation in exchange for Scott handing over his son Jacob to be raised on Apokolips.

This puts Scott in the exact same position as Highfather had been when he and Darkseid traded their children Scott and Orion as part of the pact to establish peace between Apokolips and New Genesis. Scott is now trapped between his love for his son and his duty as the new Highfather of his people.

I also find it quite fitting that this issue comes out just after the President of the United States has negotiated a similar agreement with the Leader of North Korea. Somehow I think Darkseid and Kim Jung Un are about equally reliable when it comes to keeping their side of the bargain.

King has said that this series is happening in the canonical DCU, which raises some continuity issues. But if it is, then things look bleak for the Forever People. Mark Moonrider might win his freedom, but Big Bear is dead, with his head was shown on a stake. Numerous other New Gods have met their deaths in this series, including Highfather and Orion. If this series is indeed set in the Rebirth-era continuity, then the Fourth World will be a very different place than first imagined by Jack Kirby.

I am hoping that my theory that Scott is trapped in a false reality, and that the reality outside of the trap is the DCU as we currently know it. That way, the New Gods can remain more or less as Kirby created them, without placing this series outside the DC canon.

DC has had an amazing string of successes in the two years since the Rebirth era began, and Mister Miracle is foremost among them. This title has me impatiently waiting for the next installment as the issue heads into the last few issues.