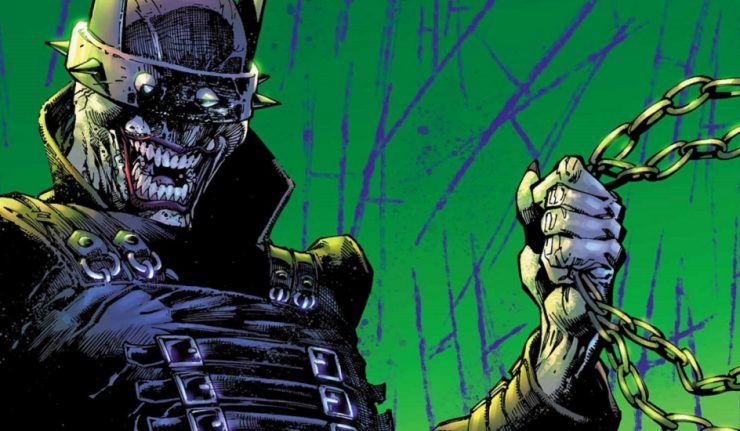 There is a new threat for The Immortal Men. The Batman Who Laughs is working with The Infinite Woman, and he reveals a dark prediction about the House of Conquest and its future. Caden Park finally meets The Immortal Man and learns more about the Eternal War.

It was a pleasure to read this issue. The opening is strong and sets up a minimum of four concrete plot threads to follow.

The story of Roderick Clay, the personal bodyguard to the Park family, will continue providing a viewpoint that reflects the advancement of time and change in the present-day world that he has returned to — a world that Caden Park has left.

Caden awakens in a room with Cyril the alter ego of Ghost Fist. His hideout is an underground former speakeasy that was boarded up after a prohibition raid, and now The Immortal Men are using it to let Caden recover.

The Immortal Man appears and reveals that he is indeed a member of one of the five originals, which was hinted at during The Forge and Metal series, who carry immortal blood. The Immortal Man has been sharing his blood, and also a portion of his immortality with recruits. Cyril, Ghost Fist, is 136 years old.

Some of the other characters are older still and there are some twists that lend a creative wink to the folklore inspirations behind their invention and the characters they are said to have helped create.

Timber can grow to a massive height and carries a big blue ax named Babe. She was recruited from the frontier of Wisconsin in the 1870s. It’s true; Paul Bunyan was really a woman!

Stray is the youngest. She was a lab experiment from the 1990s who endured daily torture until she had rescued every other creature being held, prisoner.

These are the last of the 300 that were recruited to stay at The Campus, where they could grow and learn while The Immortal Man sought out more recruits from the time stream.

The Infinite Woman also uses the time stream to build her army. By recruiting the corpses of soldiers who died on the fields of Stalingrad, Ancient Rome, and the Mongol Empire, the Infinite Woman can turn them all into mindless members of The Bloodless.

Another positive development is the introduction of an immortal character working for the House of Conquest, and once fought side-by-side with Reload during combat in Cambodia. It’s revealed that they have now chosen different sides of the conflict. The Immortal Man reveals that the Eternal War began because of differing philosophies that were formed during their wartime experiences.

The Batman Who Laughs is working with The Infinite Woman. Nice to see a Metal crossover here. He says that In every version of the Dark Multiverse, the immortals eventually joined the House of Action. It’s interesting that he claims to know because he killed them all, but if he’s here to stop it from happening there must be more to the story.

Are you keeping count of the story threads? Think I missed one?

Leave a comment below and we can compare notes.

It’s a minor complaint, and it is more about the fact that timing has clearly played a role in the way the first three issues were laid out. There were elements in this issue that addressed a nagging question in my mind, which I now realize was a feeling that the story could have been shortened. I plan on looking back at all three issues again, with the intention of sharing my views once I have read and reviewed next month’s issue.

The characters have been revealed, the stage is almost set. The stakes will soon be revealed, and then we will see just how ready Caden Park is to join The Immortal Men. I am ready for the long road and the wild ride.