The Silencer is an assassin on the run and a single mother with a secret. None of that changes in this issue. What does change? Well, let’s start with Talia al Ghul facing the consequences of bringing Leviathan after Silencer. That means the Triple Crown Diner is under fire and now Talia and Silencer must work together to stay alive.

Now, just what does Deathstroke want from all of this?

This is “Exit Strategy” Part 3.

The opening scene is pure action. Bullet casings weaving a spiral pulled right from James Bond’s gun-chamber intro, glass breaking, and at the center of it all is the center of a mother’s world. Her child. In this case, her little boy.

And just how does she keep him safe?

Hello, Zone of Silence. It’s a step up from Mother’s Little Helper — Rolling Stone’s fans might appreciate that — and a necessary item for the assassin-for-hire-single-mother who is always on the go. By placing her boy in the zone and behind a table, he is unable to hear or see anything around him. And with an action figure in his hands, what else could he care about? 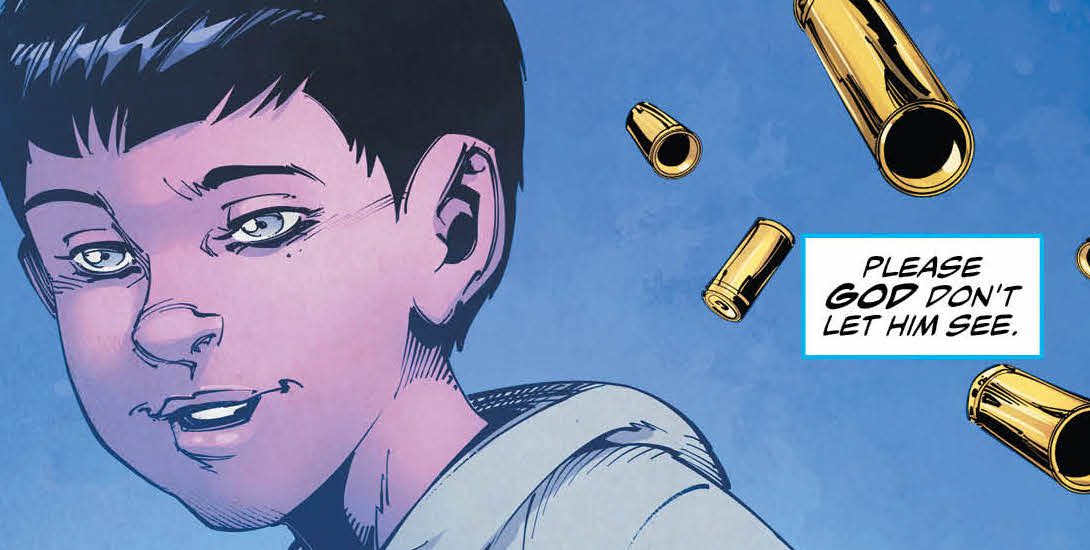 Talia and Silencer talk it out when things are tough.

The bullets are raining down and that’s the only backdrop these two need to talk it out. Talia blames Silencer for selling her out to Leviathan. To which Talia admits that she let it be known that Silencer was active again, but in her defense, she was only trying to provide healthy motivation. And Talia maintains that she is not responsible for what is happening in the diner.

The Silencer does not budge. She answers that the reason there is currently a power struggle in Leviathan ties back to Talia killing one of its underbosses. Talia argues back that Silencer pulled the trigger, but it is revealed that this was under Talia’s order. Whew!

So, who is at fault for an assault on diners. A cutaway scene shows Deathstroke and the underboss Gunn. Gunn is bragging that the removal of Silencer and Talia will cement his standing in Leviathan and assure his ascendancy. I have to admit, for a guy who looks like a frog, Gunn has a better vocabulary than I might expect from a thug.

Deathstroke doesn’t care about Gunn’s lexicon or his aspirations and makes it clear that he wants order restored. When Gunn offers more jobs for more money, and maybe an offer that shouldn’t be refused, Deathstroke is adamant that he wants nothing more to do with a squabble that is beneath him. Money or threats will not change his mind. 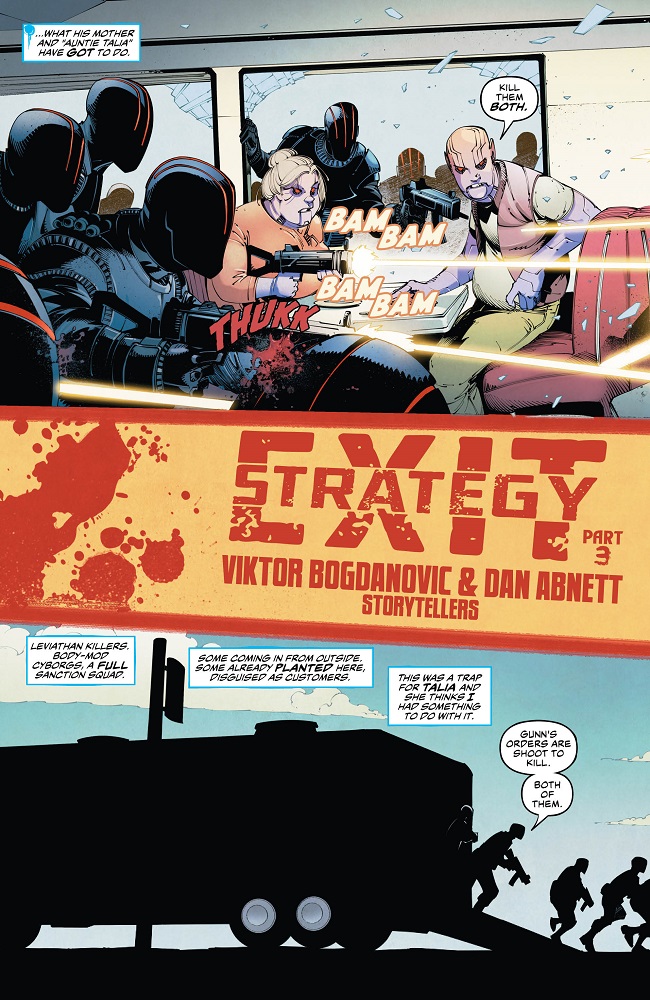 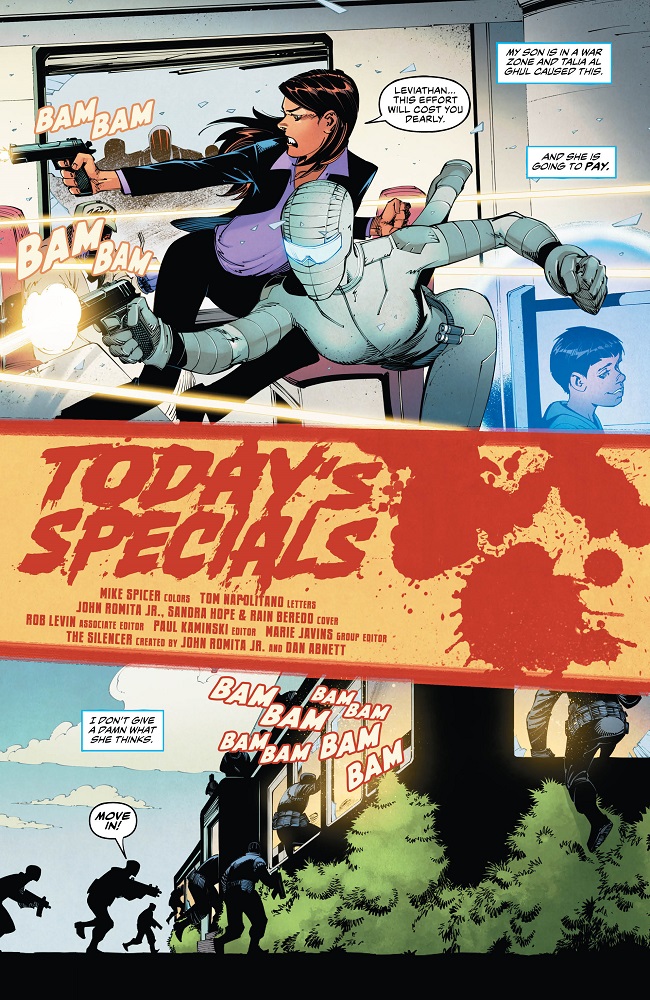 Talia kills a Leviathan body-mod cyborg with a spoon on Page 7 while coaxing Silencer to admit that this is the life she will never leave. Some things just have to be seen. It’s more than a distraction when unbeknownst to both women, Cradle — of the duo Cradle and Grave — has snuck into the Zone of Silence and is playing with his new friend Ben.

When they have killed everyone, Talia tells Silencer its time to come back and work for her. When Silencer refuses, Talia demands her return, and then says that Silencer has no other way out. Silencer disagrees, they fight, and Talia threatens to kill Ben. The Silencer grabs Talia by the hair and stabs her in the chest.

When Silencer picks up her son Ben, she hugs him to her chest and calls him Jellybean. It is a small moment of endearment, but one that highlights the sudden change that occurs when he is in her arms.

Cradle and Grave are just creepy. The way Cradle sneaks into the Zone of Silence and plants the toy on Ben is sinister and must be a sickening concept for any parent to consider or see. It makes the moment when Ben asks his mother where the other boy is that much more frightening. 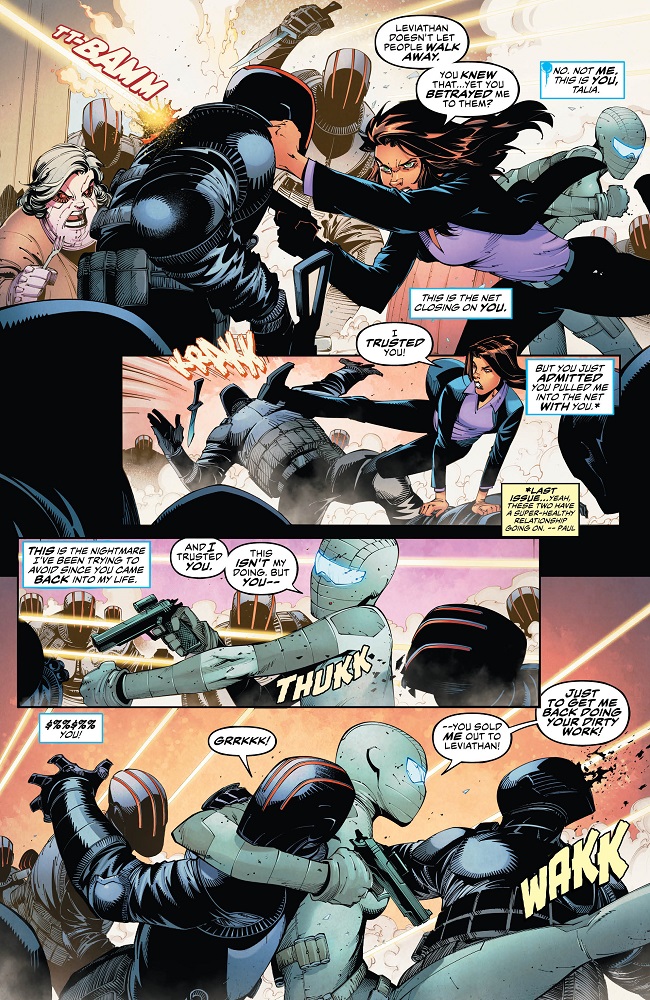 The Silencer leaves Ben alone to go back to gather Talia’s body. She is torn between protecting her son and making sure that Talia is dead. Of course, this a descendant of al Ghul, the body is missing and only the knife remains. I appreciate the tension that this creates for the reader who is worrying about the safety of Ben, I think many people think it is a questionable move by a mother fearing for her child’s safety or an assassin who knows her enemy. She only just got Ben away from danger, she knows that the odds of Talia’s body returning to the Lazarus Pit are higher whether she goes back to check or not. So, why does she go? Just to see if the body is there, does not feel very convincing.

Viktor Bogdanovic makes part three of a storyline feel like it could be a standalone story in a longer narrative, but the allusions to the previous issues create an engagement with the reader. When he introduces the necessary details, they don’t read like information dumps. Any new readers will feel like they are in a familiar place with characters like Talia and Deathstroke to frame the DC environment where Silencer is carving a life for her and Ben. If you have been following the story from the beginning, this is another strong chapter. Where will it end?

Until we learn more, she remains a mother on the run. A killer seeking a new life. A character looking for a title.