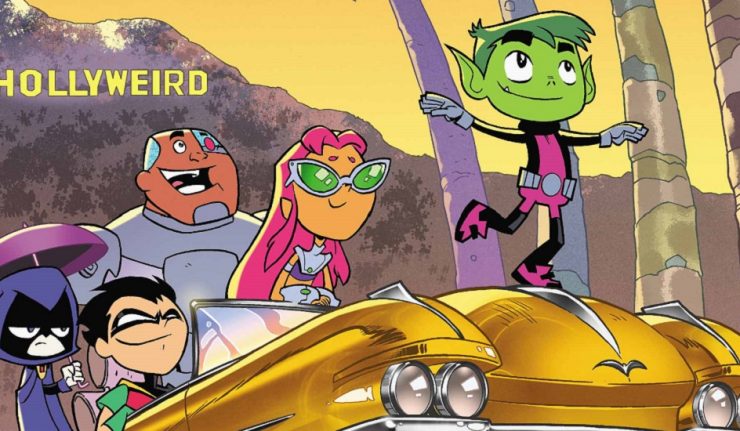 Artists: Jeremy Lawson (“Past Due”), Marcelo DiChiara (“Kickin’ It”)

Colors: Jeremy Lawson (“Past Due”), Franco Riesco (Kickin’ It”)

Control Freak’s latest plan? Sending the Teen Titans to the past! Will our heroes have fun in 1950s Hollywood? Maybe. But when they return to the present, Robin’s got some chores to do, and the rest of the team will need some superhero mentoring!

TTG is honestly one of the comics I look forward to reading the most.  As a fan of the series, I’ve always loved how on-point the dialogue is in these stories.  I’m always able to read along with the characters voices in my head and it fits perfectly, as if I was watching an episode on TV.  Sholly Fisch has such an amazing talent for capturing the pure essence of these characters and the show as a whole.  It’s so surprising to me that he’s only ever written one episode of the series – season 1 episode 6, “The Date”.  I love this episode.  It’s actually one of my favorites, and his writing is a huge part of that.

The was some great stuff in this issue.  I loved how the first story was all about superhero movies.  At first it felt kind of like a precursor to the upcoming movie, but it takes a nice turn with reveal of Control Freak.  I love when he pops up, as it always makes for interesting storytelling.  It puts the Titans in situations they wouldn’t normally be in, which is a nice shake up from the norm.

I also really enjoyed some of the references made in this one, like how G’Nort and B’Wana Beast have gotten their own movies, and how Robin gets triggered when referred to as “circus folk”.  He gets dark and heavy talking about his parents death.  It was interesting, and something I hadn’t seen done like that before.

The second story, titled “Kickin’ It”, was my favorite of the two.  It was awesome seeing the other Titans try to be sidekicks to some of the lesser used DC characters.  First off we had Cyborg teamed up with Robotman from Doom Patrol.  This was a great surprise as I wasn’t sure how deep they’d go with the hero choices here.  We even got to see Robotman b****slap Cyborg’s head right off his body.  It was hilarious.

Next we saw Raven with The Spectre, which seemed like a perfect fit, until Raven managed to outscare The Spectre.  Then we got Beast Boy and Vixen taking on Cheetah and Cat-Man, and of course Beastie finds a way to screw that up.  It’s kind of his thing.  And lastly we saw Starfire teamed with the Main Man, Lobo.  This pairing was genius to me.  The baddest MF’r around, with the sweetest alien you’ll ever meet.  How could it go wrong?  This and the Raven/Spectre team up were my favorites of the four.

But the parts I enjoyed the most were the juxtaposed scenes of Robin polishing the batarangs.  It was comedy gold and help keep me aware of the reason this was happening.

Outside of the stories being told, I loved the artwork overall (with a minor exception I touch on in bit), particularly in the second story.  Marcelo DiChiara’s crisp line work, fused with Franco Riesco’s popping colors really evoked the look of the series.  It was fantastic.

I honestly only had one negative for this whole book, and that was the aforementioned artwork from the first story.  For the most part it was good, but there were times where the faces looked a bit off to me, and overall it wasn’t nearly as crisp as I’d like it to be.  But otherwise, it was a great read with well-paced storytelling.

Overall, this was a great issue.  Sometimes, with books like this with more than one story, you run the risk of having a disappointing portion of the book.  This is made even worse when that portion is at the end, as it leaves a kind of bitter taste in your mouth.  But that didn’t happen here.  So, if you’re a fan of TTG, do yourself a favor and check this one out now.