He has many nicknames: The Man of Steel, The Man of Tomorrow, The Last Son of Krypton. In reality, he is also the first superhero and the archetype that every caped or non-caped character draws inspiration from since his inception. Now, to celebrate 80 years of Superman – the brainchild of writer Jerry Siegel and artist Joe Shuster in 1938 – fans can take home this commemorate silver miniature figure. 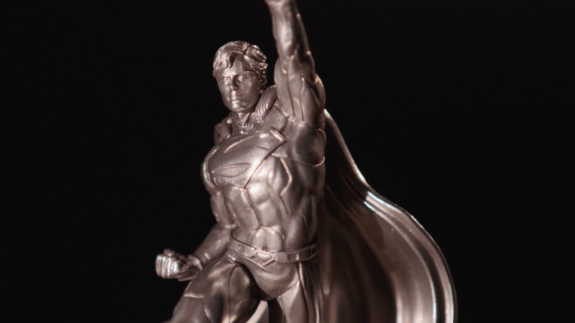 “Empire Magazine names him the greatest comic book hero of all time, “ proclaims Simon Harding, Chief Executive of New Zealand Mint, the distributor of the limited edition statue in partnership with DC Entertainment and Warner Bros. “Such is his popularity it is no wonder he is now considered one of the world’s most popular superheroes and we are thrilled to bring this monumental anniversary collection to fans.”

Just as he is the first superhero, he is also the first figurine released by DC Comics Super Hero Pure Silver Miniature on behalf of DC Entertainment. Created by 3D master sculptor Alejandro Pereira Ezcurra, this figurine also comes with a Silver Coin Note Collection. The statue – depicting the New 52 version of Superman in flight – is 10 cm in height, standing atop a metal plate with NZ Mint certification and number on the bottom. It is composed of 150g of pure silver with an antique silver polish and is packaged in black velvet in a high-quality Superman 80th Anniversary case.

The Silver Coin Note Collection, meanwhile, comes in an album featuring six 5g pure silver coin notes and iconic Superman cover images, including the cover of Superman #1 by Shuster, that depicts the character’s evolution from 1939 to 2017. As to the coins themselves, the backs feature the Ian Rank-Broadley effigy of Her Majesty Queen Elizabeth II.