Review: The Curse of Brimstone #4 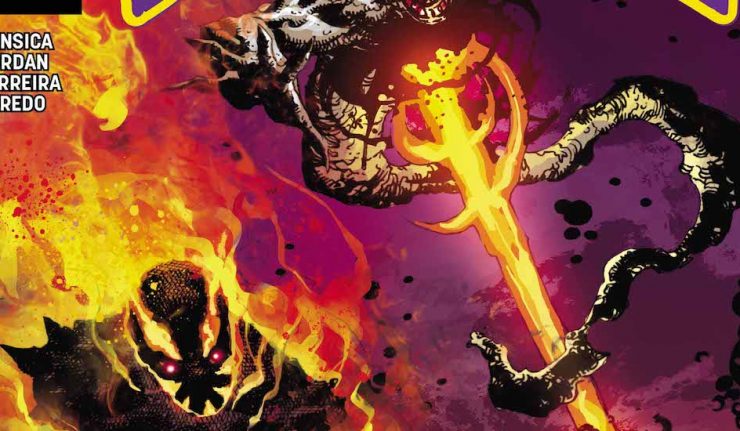 Driving in a stolen car and a deciphering a map that keeps moving is bound to lead to some false starts. Meeting a drifter at the remains of another small town that vanished is one of the things your mother always warned you not to do. But, the stranger named Enoch knows about the Salesman and his ledger, and the danger Joe faces every time he becomes Brimstone. Could he have the answer to stopping the Salesman?

Every new arc needs doubt and confusion. The crescendo and resolution that closed the last issue never last in real life or in stories. The characters need to understand that and writer Justin Jordan sets this up nicely. Joe and Annie are lost. The town and father who gave them a united purpose are gone. They are driving in the Salesman’s car on a mission to track him down, but they don’t know where they are going. Annie is trying to decipher the ledger they stole from the Salesman, but according to her the code of symbols keeps moving.

This might explain why they arrive at a town that is no longer there, and amidst the desolation, they meet a stranger named Enoch. He knows who the Salesman is, and he has a ledger that looks an awful lot like Annie’s.

Enoch has powers that he claims do not come from the Salesman. He knows that the creatures the Salesman creates are agents. Like their maker, these agents work to twist the world for the arrival of an evil that lives in the Dark Multiverse. An evil that wants to succeed where the Batmen did not. Each time Brimstone or another agent uses his powers they change the world to be more like the world where the Salesman’s masters come from.

Then he uses a knife to draw blood from his hand and when it drips on the pages of his ledger it shows where Detritus will be next. Annie has a great tough line at this moment. When Joe declares that Brimstone is ready to stop the agents, Enoch warns that the monster they are hunting was once human. Each time it used its powers the monster became less human. Eventually, that will happen to Joe.

Later, Detritus is about to harm a family in their car when Brimstone steps in and stops him. Annie gets the family to safety, while Enoch finally shows his power.  But, it seems weak and barely holds back Detritus when he gets an upper hand on Brimstone. It’s a nice reveal that Enoch is using his experience and knowledge to cover for a lack of power. He’s losing his ability to fight against Agents. When Brimstone recovers he is angry. He remembers that Enoch said Detritus has some part that is still human.

Brimstone says, “Let’s see,” and rips out the skull and spine of Detritus. This shocks Joe, who says, “There is always a person there. Always.” Joe is weakened and collapses. Enoch stands over the skull and for a second time, he calls it by the name of Elijah. Then he shatters the skull with a blast of power from his arm. When Enoch turns on Joe and tries to finish him off while he is still weak, Enoch warns that this will be his fate too. It’s better that he kills Joe too.

Annie speaks up right when Enoch begins his attack, and she is standing behind him with his own loaded shotgun. She paraphrases a line he used when he is first introduced and Enoch hesitates.

When Enoch stops, I really liked his cryptic warning that the curse can’t be broken, “it has to go to someone.” I like the allusion that Annie or someone else could be tasked with Brimstone’s curse if Joe uses up all of his humanity as the monster. It also adds new weight to the book title’s meaning.

Then Enoch disappears. When Joe says that they are alone. Annie rebuts, “No, We’re together.”

I appreciated the way that Enoch called Detritus by the name Elijah, but I felt that this was a nice opportunity to set up the details that will add more threat or weight to the story of Enoch and Detritus and when the issue was done I did not feel either threat or weight.

Planting seeds are hard work and I get that, but the opening page with the character begging please and saying, “We meant it for the best,” is foggy hints that there is more to the story of Detritus and Enoch. I think there could be more clarity without giving away the direction or later reveal.

A great chapter that sets up the next arc. Justin Jordan is doing a great job of introducing the framework of the Salesman. By revealing the scope of the curse, the limits of Joe’s new powers, and a ticking countdown that will lead to more developments, Venditti has lit a metaphorical fuse. It might burn fast or slow, but the fuse will run out. When it does, we might see what Joe and Brimstone are really capable of becoming. 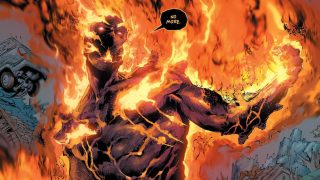 Review: The Curse of Brimstone #7 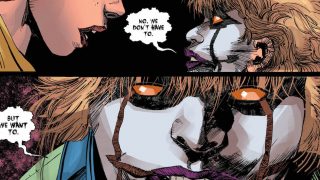