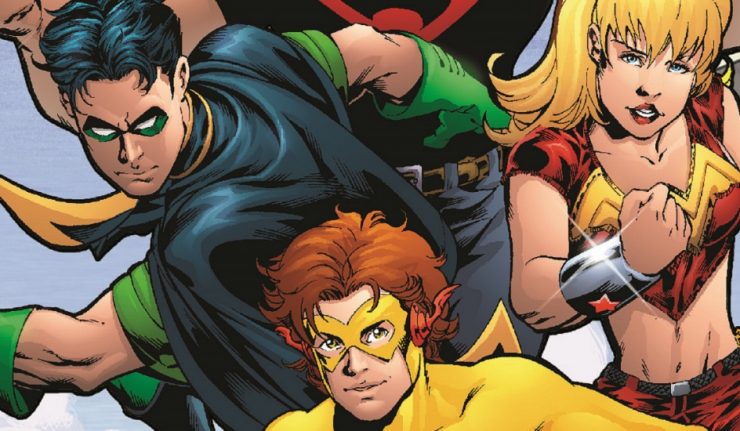 In the first part of this original six-part Teen Titans story, the Teen Titans’ pizza dinner is interrupted by the introduction of a new villain, the Disruptor, and the battle spills onto the streets of San Francisco, putting its citizens at risk! Can the Titans stops him from stealing a valuable piece of technology before it’s too late?

First off, I’d like to say that I think it’s great that DC is doing these new Walmart exclusive Giant sized books.  It’ll draw in a new crowd of readers that may not be familiar with some of these characters or with local comic shops in general.  And making one of the books Teen Titans-centric was a great idea, as kids who may like superheroes, but don’t read comics, will most likely know some of these characters from the various animated shows like Teen Titans, Teen Titans GO!, and even Young Justice.

This book, like the other three, contains a total of four stories: one brand new and exclusive to this book, and three reprinted stories from other points in DC’s history.  This one, in particular, spans the last 15 years and keeps the books relatively similar by focusing on the younger heroes of the DC Universe.  We get a brand new Teen Titans story that involves (most of) the core team from the animated shows: Robin, Starfire, Raven, and Beast Boy.  This is a perfect start, as it has a better chance of hooking a younger audience and exposing them to some new characters and this medium of storytelling.

The story itself is a rather simple starting point, and is one I could see being used for the Teen Titans GO! animated series, minus the end scene.  Eaton does a fantastic job drawing these characters; they’re beautiful, especially when combined with Faucher’s sharp inks and Charalampidis’ popping colors.

The twist at the end was definitely intriguing, and should make for some interesting storytelling in future chapters of this book.  It should also help to hook fans of the shows as H.I.V.E. is one of the main antagonists in both animated Teen Titans series.

Putting it side-by-side with the Teen Titans from Geoff Johns’ 2003 run is a great way to expose new readers to a different form of this team.  It gives them something different to experience, while not straying too far from what they know and what they just read.  Also, including the Rebirth title, Super Sons, and the New Age of DC Heroes title, Sideways, is a great way to show the breadth of these young heroes within the DC Universe.

The first negative, right of the bat, is the cover.  Although it’s a great looking cover, I feel like it was the wrong move to put those Teen Titans front and center.  They should have used Robin, Starfire, Raven, and Beast Boy as their four for the cover, since those are the characters non-comic readers would be most likely to recognize as this team.  Yes, people will know the Superman symbol, and yes, people may recognize the Flash and Wonder Woman symbols, but they won’t actually know who these characters are.  I keep going back to the kids who watch the animated shows because those are the ones this should be targeting, and these aren’t the Titans most of them will know.

As far as the new story goes, at times it felt too exposition-y, with certain characters giving too much explanation as to what they’re doing.  And on the flip side, there was a certain scene where no explanation was given where is could have been used to clear something up.

The other negative for me, which is something minor and comes from not really reading any Teen Titans books in quite some time, is that these characters are very different from their animated show counterparts.  This isn’t a big deal in general, as it’s a different medium and it’s not telling stories based on the show, but it could possibly push away some new readers who are expecting the characters from Teen Titans or Teen Titans GO!

Overall, this is a great anthology book that is sure to bring in new readers to the wonderful world of DC Comics! 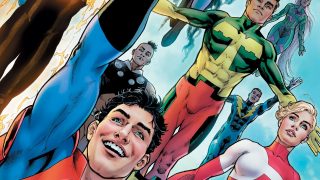