Superman is investigating a rash of fires.  However, he’s got a break in at LexCorp to deal with first.  It’s a fairly easy task for the Man of Steel, but he doesn’t let the moment go without asking the perpetrators if they’ve heard anything about the fires.  The next day at the Daily Planet, new City Beat reporter, Robinson Goode, throws it out that the Fire Department has received a tip indicating Superman has started the fires.  Clark is clearly interested and goes to check it out with Fire Chief, Melody Moore.

It takes some convincing, but he gets Moore to confide in him the identity of the tipper.  Together the talk to the kid and find out that he was paid to do it by a bald guy.  Luthor?  Probably not, but it does give Superman a reason to go back to the Planet to check out a database of bald suspects.  While looking them over, he’s cornered by Trish Q, gossip editor who proceeds to suggest that Lois has left Clark for Superman! And she want’s Clark’s story.  Clearly upset, Clark leaves in silence and takes to the skies as Superman. 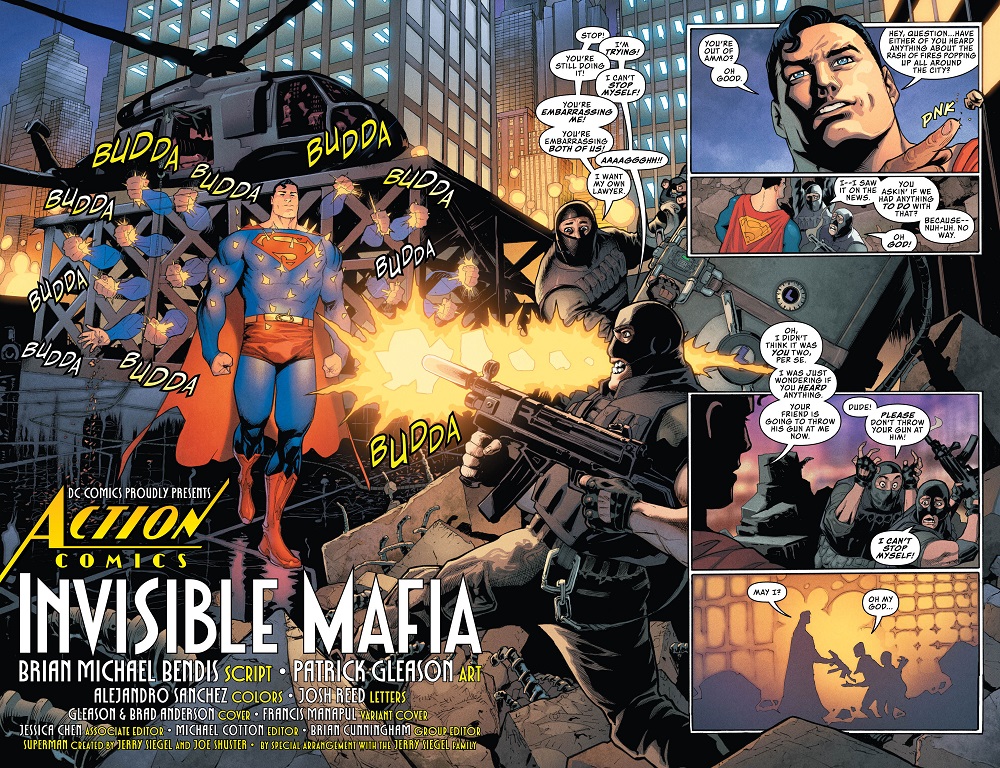 Unbeknownst to the Man of Steel, he’s being watched.  A fellow in front of a bank of televisions and computer screens is observing Superman’s flight and a voice tells him to “gather everyone, it’s a special occasion.”  The scene switches to a meeting between some new characters in a lead drum in the middle of a room in a mansion.  The leader of the group is a Mr. Strong and his associates have code names like Yogurt and Lettuce.  Strong gets Yogurt to confess that he’s been starting the fires as a distraction for Superman.  Strong isn’t happy that the fake tip has led to Superman becoming involved in the investigation.  A new player enters, the Red Cloud and she eliminates Yogurt in a surprising way.

The final panel reveals Lois’s location and that she’s typing madly on her new book.  We even get a preview of potential titles.

Superman’s apprehending of the B and E suspects in the opening of the issue plays well and it’s nice to see some classic pedestrian crimes handled by the Man of Steel.

The best part of the issue was the introduction of this new Invisible Mafia.  They are brand new characters and seem to have a lot of mystery surrounding them, not only to the reader but to each other as well.  It’s quite clever for them to meet in a huge lead drum in someone’s living room.  Mr. Strong also admonishes them for mentioning Superman.  He clearly doesn’t want to raise any awareness of the Man of Steel and he’s taking every precaution of which he can conceive.

Lastly, it was a nice humorous touch to include Dan DiDio and Bendis in the mug shots of bald suspects! 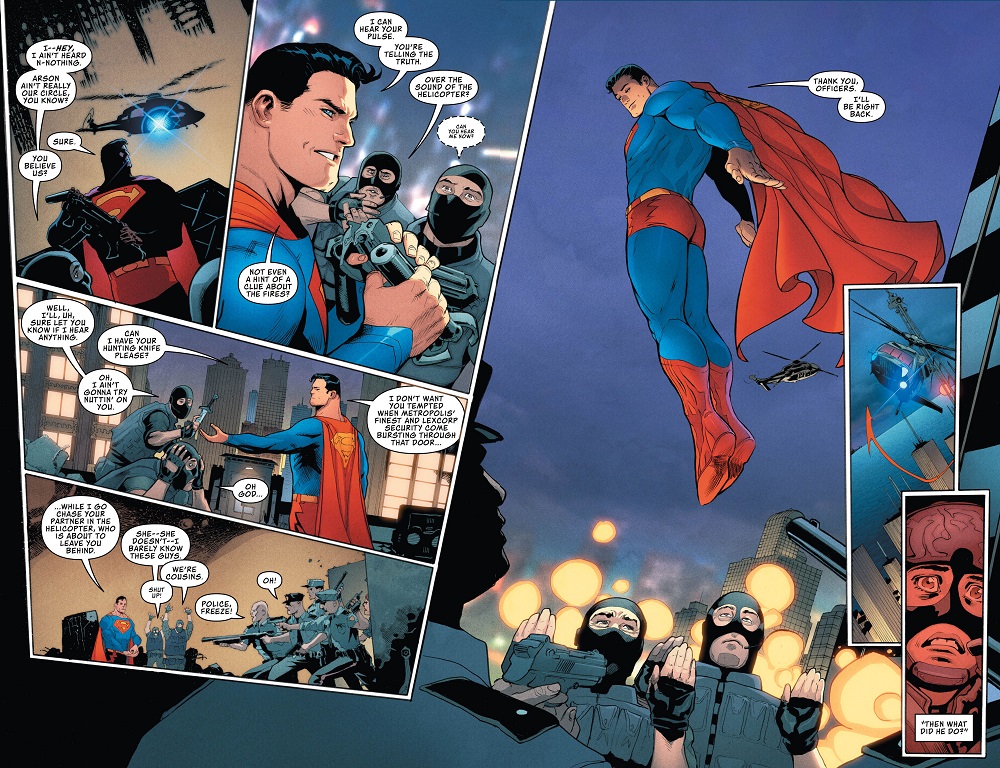 Having Lois out of the main part of the book and keeping Clark in the dark about her whereabouts strikes me as a little strange.  It puts Clark in a downer frame of mind and that seems very un-Clark like.  It’s still too early to tell how this will play out and if it is a good move for Superman or not.  Additionally, it doesn’t really seem like this is the right time for Lois to be working on a book.  And it’s even stranger that she’s not that far away.

While all the new supporting cast seem like they have a lot of potential, what Clark does not need is Soap Opera style relationship drama.  It’s hard to tell if Bendis is suggesting that Clark has doubts about his relationship with Lois and that Trish really hit him where it hurts.

This is a good issue, but far from Earth shattering.  The ambiguity of Lois’s larger role in the story is a little off-putting.  However, the new villains appear to be intriguing and should provide a good challenge for Superman.  There’s a fair amount of story in this issue, which allows for some of the supporting cast to get panel time.  Hopefully, Bendis will explore these new characters, but not at the expense of Lois and Jon.