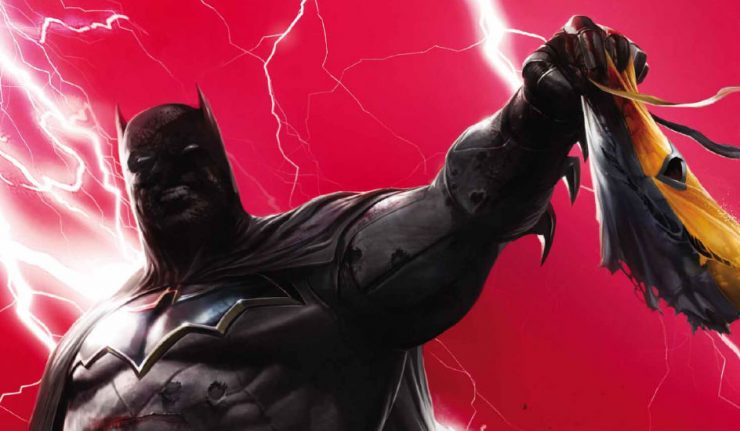 Slade Wilson breaks into Wayne Manor! Intent on confronting the Dark Knight once and for all, Slade infiltrates Wayne Manor and takes Bruce Wayne hostage! Will Bruce be able to defeat Deathstroke, or is this insanity on Slade’s part for invading Batman’s turf?

Right away Priest throws you right in the middle of an action packed story. If you’ve been following my previous reviews, then you’d know of the revelation that Damian Wayne may be Slade Wilson’s own son! In the previous issues we’ve seen Batman constantly harass Deathstroke to no end, shutting down his contracts and bank accounts across the planet. In an effort to discover the truth however, it seems that both men have been played, and it all comes to light in this issue. Priest pulls no punches in this issue between the two adversaries and I have to admit I never thought Slade would do something so arrogant–yet brilliant.

I have no complaints about this issue. Priest has been building this confrontation for awhile, so to finally see it come to a head was great. It seems that Slade has no idea that Bruce is Batman, rather he thinks that the playboy Wayne is Batman’s benefactor. He kidnaps him and takes him to the cave hoping to draw out Batman–and he does. Pagulayan compliments the page by showcasing nothing but brutal action, as we see Slade and Batman fight all over the cave, with Batman gaining a slight advantage. Thanks to being on his own turf, things seem to be turning to Batman’s favor but Slade turns things to his own advantage eventually.

Deathstroke #34 was a great read and an enjoyment from start to finish. Priest gives you drama, action and the suspense of who could be manipulating two of the world’s greatest hand to hand fighters. The reveal is made here in this issue, and it seems that Slade’s own history is to blame here. Priest gives a wonderful dialogue between the adversaries during their fight that is in my opinion one of the best in comics thus far. It truly shows the differences yet the similarities between Slade and Bruce without letting the action get in the way. Now that we know both Batman and Deathstroke have been manipulated, I’m looking forward to seeing how this story ultimately plays out!