Letters: Tom Napolitano
Summary
I’m going to be completely honest. The Unknown Soldier is exactly the person that Ethan needs right now. But, is Damage the person they both need in the end? Colonel Jonas has found Ethan’s hospital room at the Harry S. Truman Veterans hospital. In ten minutes, Ethan will be able to set Damage free. When they are backed into a corner, can they trust Damage to help them get free or just to get his revenge?
Positives
The Unknown Soldier’s appearance is perfectly timed. He is the example of a soldier, and a spy, who has lived and survived by making the impossible look easy. When Ethan awakes, it is to this voice, telling him that there is no time to rest, they need to go and there is danger coming. Then the man who is speaking peels off his mask.
It started with a whisper possibility way back in issue #3. A soldier who told Damage that there was hope at the tomb of the unknown soldier. The soldier whispering those instructions, was the Unknown Soldier. The plan was to get Ethan to safety after he broke free from his transport, but then the plan changed. 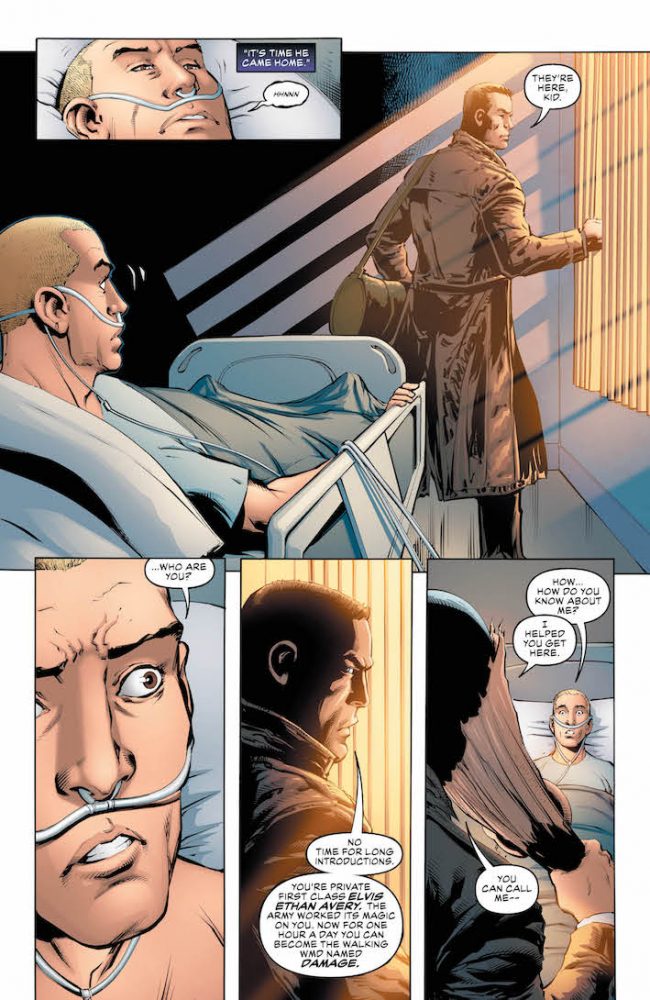 When push comes to shove, the Unknown Soldier plays to continue the mission. The fight in an elevator features Handyman diving into the elevator car. The Unknown Soldier hits the stop button, fires a point-blank shot right in Handyman’s metallic eye. The Unknown Soldier shoots all four elevator cables with one bullet.
We get to see the conflict in Jonas’ past. Last issue we found out that her husband is in a veterans hospital and that it is because of her actions. The possibility that the veterans at the Truman hospital could be in danger is something that she knows, but that the team does not see with the same degree of concern. Jonas tells Cataract that if any of the veterans die, then he dies.
It makes them eager and anxious and that creates the opportunity for things to happen that make the story more engaging. Also, we learn that this team, these Hunters, were hired by Colonel Jonas from someone named Mr. Leash because they are supposed to be the best. It’s a clue for either a new or existing character. Anyone think they know? 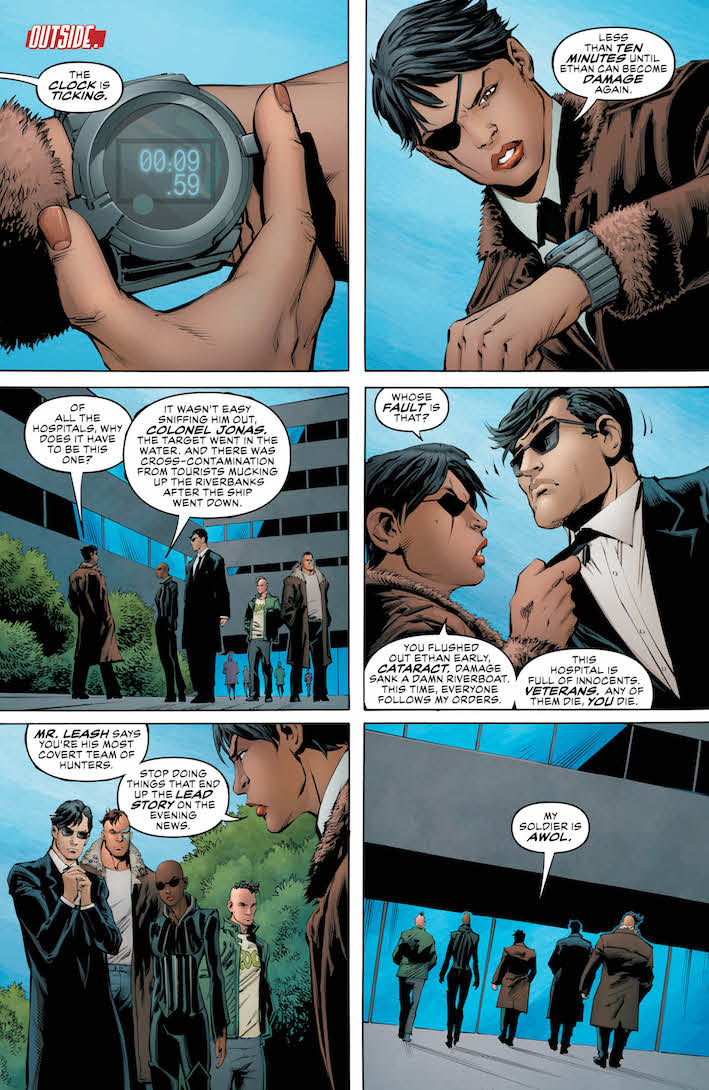 When Ethan and the Unknown Soldier are trapped by the Jonas and the Hunters, band name anyone?, Ethan begins to transform and there is a series of uncomfortable expressions on the face of the Unknown Soldier. At first glance, it feels wrong for him to react that way, but then it’s painted with the understanding that he knows the lasting effects that being Damage will have on Ethan and it makes him feel the pain in a personal way that has always been a cornerstone of the Unknown Soldier’s story.
When he says, “War is hell kid. It changes you forever,” there is a sense of sorrow that was a central thread in the fabric of the Unknown Soldier’s mythos. The changes that it brought to his life changed his future forever.
Negatives
Ethan needs the truth, but the cost does not seem worth it. When he and the Unknown Soldier make it to the parking garage. They have a moment to get away, but Ethan says he wants the answers. The Unknown Soldier tells him what he wants to know, and it’s helpful, but not at the risk of getting caught. Logistically, they could have driven away and while they were on the road Ethan could have learned the very same information.
Verdict
This was a great introduction for the next arc in Damage’s development. The Unknown Soldier is a legendary character and I love his role in this story. I think he has the compassion to show Ethan the two sides to the choices he will need to make. He also has the experience to provide some guidance and maybe a few tricks about how to operate out of the public eye. I think Ethan would benefit from a disguise.