Summary
It’s simply clear, the adults are not alright. Pops kicked the kids out of his diner and welcomed Mr. Weatherbee with open arms. Riddler has recruited Reggie Mantle to get the dirt on all the players in Riverdale, and Joker wants to kidnap Jughead. Oh, and when Dick Grayson and Barbara Gordon aka Robin and Batgirl go undercover at Riverdale High, how will Archie and Veronica ever be together again?
Positives
Dick Grayson and Barbara Gordon have to go undercover at Riverdale High. There is simply no intel available for Batman to figure out why Hiram Lodge and Police Chief Keller, the two most powerful men in Riverdale, are acting strangely. Since they are both parents, that leaves it to Dick and Barbara. Watch the reactions from Archie and Veronica when the new kids walk into Mrs. Grundy’s class.
Joker, Riddler, Circe, and Penguin can see it all because they are watching through the two-way blackboard in Mrs. Grundy’s room. Penguin claims that he hated school and dreamed up the idea for the blackboard when he was nine. 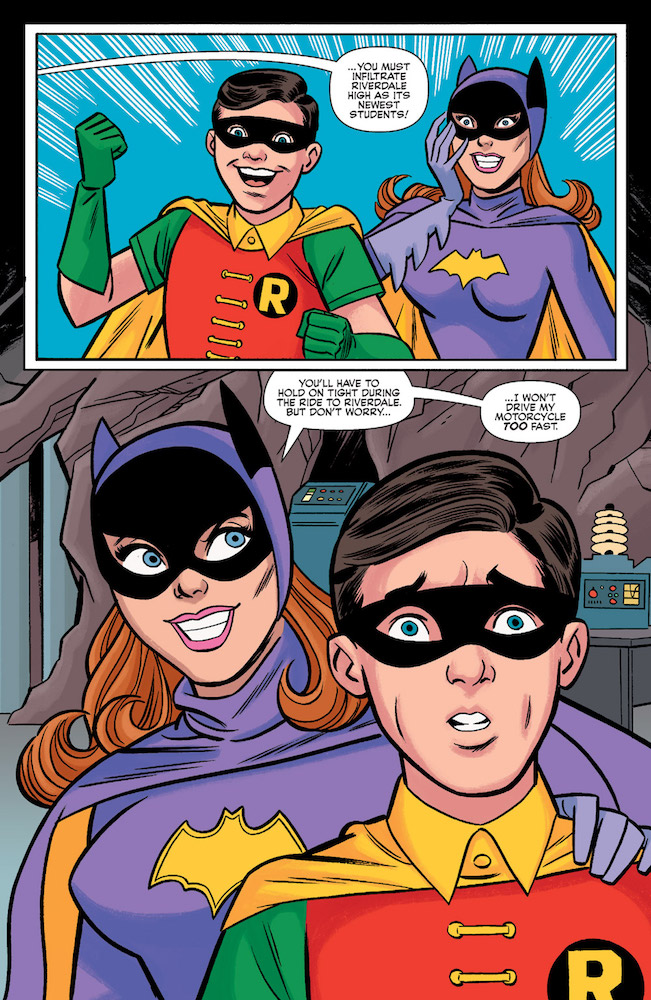 Archie is always working on his jalopy, and Reggie is always messing with him. So, when the tired gag gets a refresh because Riddler and Circe witness Reggie pretending to deliver Archie’s carburetor only to smash him with a coconut pie, it’s fun to see the old joke played at a different tempo. This time, it gets the Riddler to recruit the only criminal potential in town. Circe’s song is not enough to draw Reggie over, turns out it doesn’t work on teens the same as men, but thankfully the young Mantle’s greed is a perfect motivation for the Riddler’s plans. 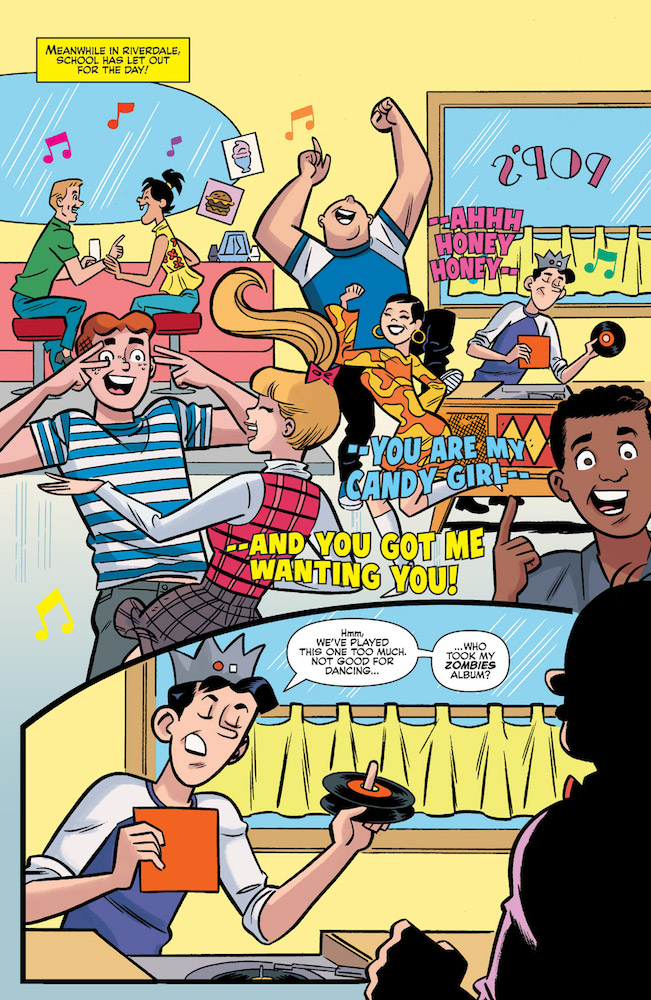 When Pop first decides to get rid of the teens, it starts with taking the record “Sugar” by The Archies off the jukebox. Not only is it a cute wink to music fans, it was classified as the definition of a guilty pleasure on the HBO show The Newsroom. Clearly, something is wrong with Pop if he can’t enjoy this song.
I love physical puns. When Pop puts up a sign that says he is promoting Joker Burgers, he opens the door for Mr. Weatherbee. When the door closes there are three shadows, the third is the unmistakable silhouette of the Penguin. The blinds drop in the next panel, but not before literally foreshadowing the influence of the Penguin by showing his shadow.
Negatives
Batman’s role in this issue is really minor. It’s almost unnecessary. He and Alfred witness Footnote committing a robbery with fraudulent bills in the bookstore and then give chase, but nothing else is seen by the end of the issue. Other than sending Dick and Barbara to Riverdale in the opening pages, it is hard to see his impact on this issue.
Verdict
It was nice to see the development of characters in Riverdale, and the injection of Dick and Barbara. If it is a compensation for the amount of time spent on Batman in the last issue, I can be understanding as long as the next issue gives Archie and Batman equal time. Other readers, might not be so forgiving.