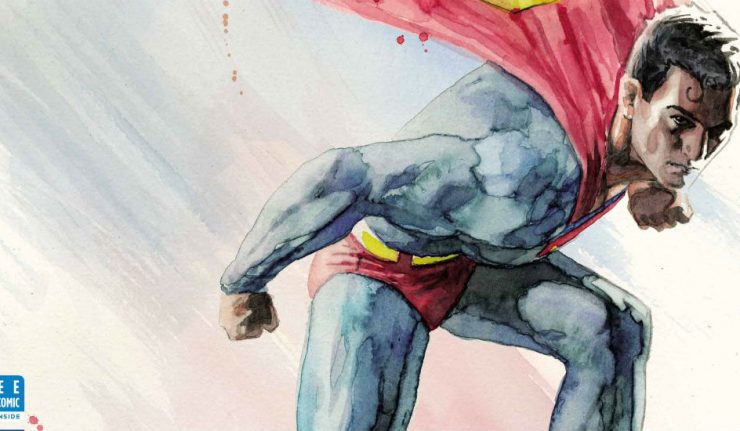 A dead man falls from the sky in downtown Metropolis and Superman catches the blame for it.  Robinson Goode has discovered the identity of the body as Yogurt, whom we saw killed by the Red Cloud last issue.  Perry is furious with Goode’s headline “Superman Drops Gangster To His Death.”  She claims there were multiple eyewitnesses, but Perry’s not having any of it as he places Superman in Coast City with the Justice League stopping an attack by Starro the Conqueror.  Perry sends Goode back to the streets for more story, because he just doesn’t buy it.  He also sends Clark out to do the same thing to see if he comes back with something vastly different.

Meanwhile, Moxie is talking to Whisper, trying to get a bead on Superman’s whereabouts.  Whisper is at all times monitoring Superman’s movements for the Secret Mafia.  Moxie is suddenly attacked by….the Guardian!  (Haven’t seen him in a while!)  However, before the Guardian can do much, he in turn is attacked by the Red Cloud.

Clark has returned to the Planet having successfully uncovered from Yogurt’s friends that he was setting the Metropolis fires to distract Superman.  After delivering the news to Perry, Clark takes out his frustrations on the asteroid belt between Mars and the outer planets.

Robinson Goode meets with Mr. Strong, and she appears to be up to no good.  Not only does her conversation makes it seem like she’s a mole at the Planet for the Invisible Mafia, she also asks for a piece of Kryptonite!  Apparently, Strong is not at the top, there’s someone else, a woman who is behind these machinations.  And Strong tells Goode that she will get her Kryptonite.

Upon returning to Earth, it doesn’t get much better as old associate Cat Grant stops by the Planet to say hello to Clark and tell her how great the bit of Lois’s new book that she let her read is.  Clark isn’t able to cover up his reaction and Cat realizes that something’s wrong.  However, this does lead to Clark finding Lois despite her disguise.  All Lois can manage is, “Hi, honey.”

The first thing that stands out about this issue are the sticky notes all over the computer monitor on Clark’s desk.  Some are just funny, others are connections in the greater DC Universe.  All of them are clever and entertaining.  The mystery of the Red Cloud and Invisible Mafia proves to continue to be entertaining.  These are all new characters and we only learn a little bit at a time.  However, the slow peeling away is working for these guys right now, because there seems to be a bigger mystery afoot.

The appearance of the Guardian is also appreciated.  This current incarnation seems like he might be more like the original Golden Age version, as Maggie Sawyer identifies him in the hospital as a former policeman.  (Don’t worry, he’s beaten up pretty badly, but not dead!)  Hopefully, he will play a larger role as this story unfolds.

The biggest drawback to this issue is the continued subplot of Lois’s disappearance.  Why is Lois in hiding?  It seems very unusual.  It contributes to a mopey Superman/Clark and while it displays Superman’s humanity, Lois’s secrecy doesn’t seem to fit their relationship.  It seems a huge distraction to an otherwise interesting story.  Without knowing much about why Lois has gone into seclusion, it doesn’t really work with what we already know about her and her relationship with Clark.  There’s a terrible sense of foreboding.  And, it’s not just that something bad may happen, it’s that the resolution is either terribly underwhelming or the content just doesn’t fit well for a Superman story.  Just like a “baby daddy” story in the film Superman Returns was wrongheaded, divorce court for Lois and Clark doesn’t fit these characters either.

So far, Action Comics in its second millennium is a book going in two directions.  Superman’s characterization, the mystery of the Invisible Mafia along with many of the little details feels spot on and pretty darn interesting.  However, the Lois Lane subplot feels so out of place that the book would be better if it was excluded entirely.