When Penelope Pitstop is tied up on the tracks, again, by the nefarious Hooded Claw, the Ant Hill Mob is always there to save her. But, when a monster starts chasing Penelope will the littlest gangsters let Scooby and the Gang help or will this team-up leave Penelope in peril while her protectors fight amongst themselves?

I love it when the quips and snarky comments are front and center. When Penelope and Scooby both cry help, Clyde says that one of the voices sounded like Penelope and Softy adds that the other voice sounded like someone with a speech impediment. 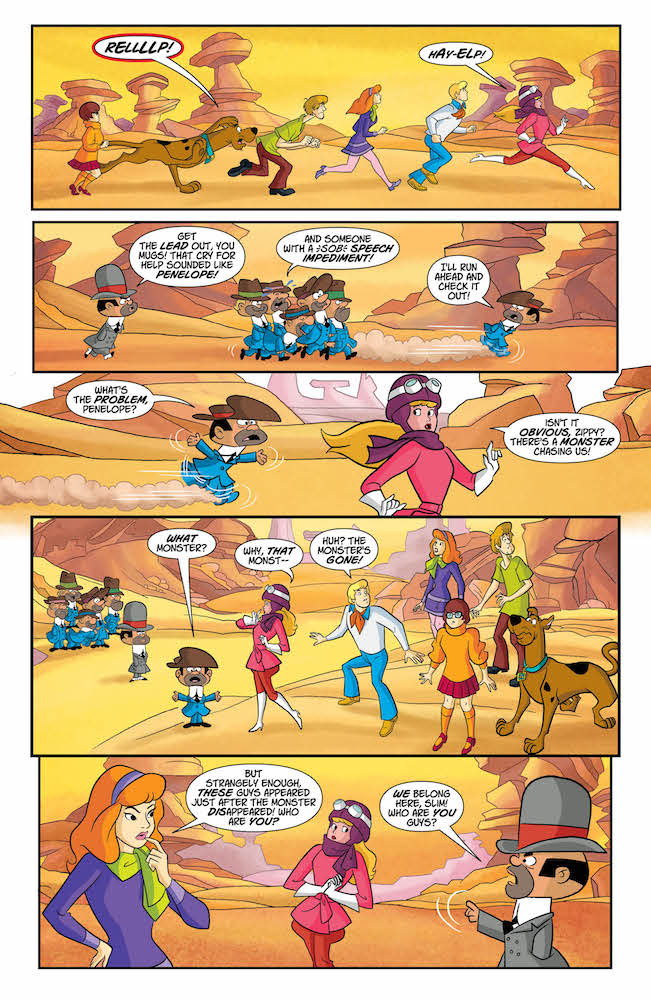 Later, when Penelope explains how she met the Ant Hill Mob when they used to drive cars too, she mentions that the rest of the gang joined a choral group, and now they are in a place called Sing, Sing. I’ll give you a moment to catch your breath.

Then, Penelope explains that the gang always rescues her whenever she gets tied up on railroad tracks. How often does that happen, Daphne asks. Approximately, 3-5 times a day. It’s also why she always carries a nail file.

Ok, last one, when Penelope’s guardian Sylvester Sneekly says the monster has been captured, and the case is solved, Fred says that they haven’t even pulled off any masks yet. 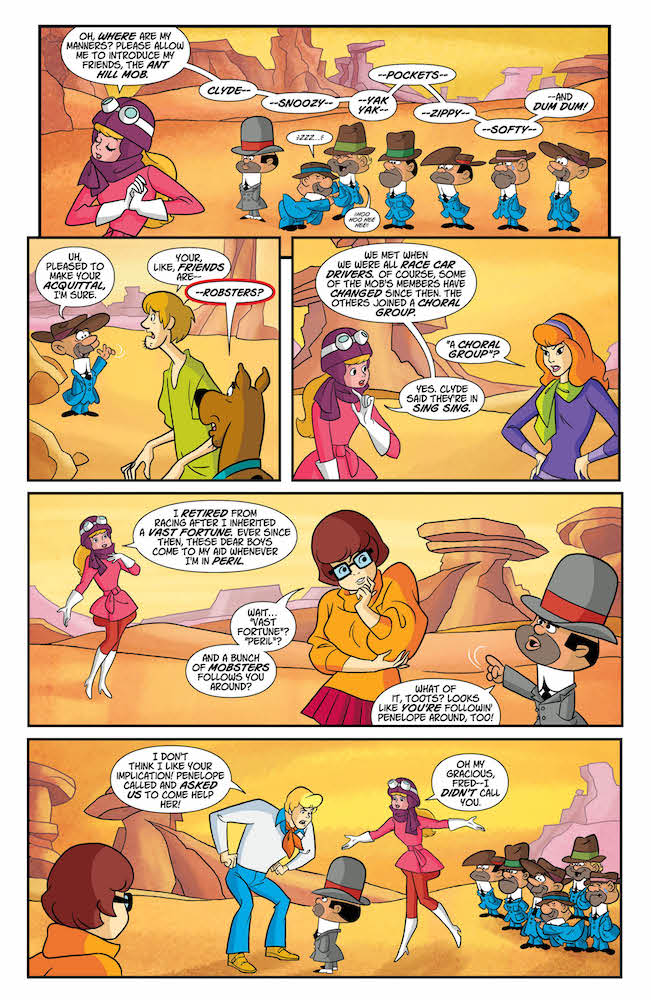 This comes in handy when the Scooby gang sets a trap for the Hooded Claw. When Claw ties them all up on the railroad tracks, he pulls off the riding helmet of Penelope to discover that it’s actually Daphne. Ah, I love a Scooby Switch.

Chuggaboom. I love a talking car with a sense of humor, and I would have loved to hear more lines from this one. Chuggaboom’s moments were short and left me wanting more.

The history of a classic character like Penelope is lost on the reader when the jokes repeat themselves, but with less return than the first time. It makes them feel more tired than cute, and these comics should be a joy to read and not a chore. I wanted to have more fun reading this like I did with Swamp Thing and the JSA.

When Sylvester comes to arrest the Ant Hill Mob, everyone seems surprised, but no one does anything. It’s a little weird that Daphne and Fred find Clyde suspicious and then do nothing when Sylvester takes the gang away to a fake jail.

I wanted to see some of the fun that I enjoyed over the last two issues. I could sense the effort, and there were some moments that were light and fun, but it’s a chore when a story is working so hard to be as funny as it could be but has to settle for the results. That’s not fun for anyone. Not every hit makes it out of the park, but this one at least made solid contact. But, it would have been awesome with just a little more Chuggaboom.